Minute for Mission: Prayer for the Peaceful Reunification of the Korean Peninsula 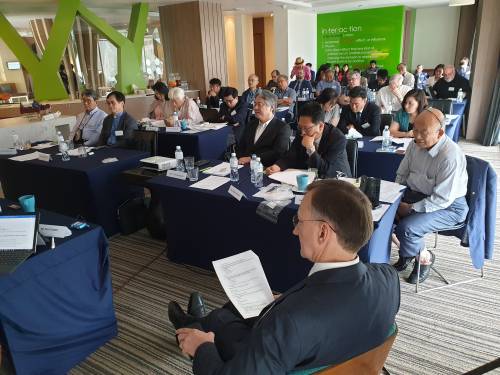 North and South Korean Christians gathered in 2017, along with ecumenical colleagues and supporters as part of the Ecumenical Forum for Korea. (Photo credit: Kurt Esslinger, mission co-worker)

I served as a Young Adult Volunteer (YAV) through the Presbyterian Church (U.S.A.) in South Korea from 2016–17. During my time there, one of the major eye-opening revelations was learning about the role of the United States during the Korean War and in maintaining the current North-South divide on the Korean Peninsula. No one taught me about this in my history classes.

Ever since learning the truth, I have been struggling with a major question: What does it mean to witness for peace in a conflict in which your own country’s actions historically and actively contributes to the division of a nation and a people? How do we use our voices? To whom should our advocacy be directed? Over the past few years, I have been slowly finding an answer.

There are multiple Christian denominations in South Korea, some of which are both PC(USA) partners and working for peace and reunification on the Korean Peninsula. A few of these partners include the National Council of Churches in Korea (NCCK), the Presbyterian Church in Korea (PCK) and the Presbyterian Church in the Republic of Korea (PROK). The NCCK in particular, has been very active in building relationships with the major Christian group in North Korea, the Korean Christian Federation (KCF) to work toward peace. Through the hard work of both the NCCK and the KCF, the Joint South-North (North-South) Prayer for Peace & Reunification on the Korean Peninsula was written in 2019. This prayer is to be used on the anniversary of Aug. 15, 1945, liberation from Japanese Occupation and the beginning of division on the Korean peninsula. They also provide it to the public so Christians around the world can join in the prayer for peace.

Notice how this prayer came about through the efforts of North and South Korean Christians, without direct influence from the United States? Others may have supported this effort, but the process was led by North and South Koreans. As stated in an upcoming video reflection with the Rev. Lee, Hun-sam, who played a key part in helping to write the prayer as former chair of the Reconciliation and Reunification Committee for the NCCK, “The prayer expresses the principle that the Korean Peninsula was divided by other powerful nations (such as Russia and the U.S.), but to overcome division and achieve peace and unification it is important that the great powers must step aside to forego their interests so that Koreans can deal with reunification on our own. It should be centered on South Korea and North Korea who actively meet, talk and work together. Other countries should stop disrupting our process.”

So, how do we witness to peace when our own country is complicit in the conflict and division of others? Both the NCCK and KCF have demonstrated that prayer is one clear response we can take. Additionally, we can stand in solidarity with those already doing the work toward peace building. Our advocacy can be focused on our government to stop disrupting the efforts of those directly affected and involved in this conflict. But ultimately, those closest to the conflict are the ones who need to be in conversation to end it, without outside influence from major powers. To paraphrase Rev. Lee, Hun-sam, sometimes we just to need to get out of the way and allow those conversations to happen.

Rev. Lee, Hun-sam’s reflection will be featured in the Path of Peace Reflections, made available during the Season of Peace, from Sept. 5 to Oct. 3, 2021.  You can sign up to receive those reflections via email using this link.

Today’s Focus: Prayer for the Peaceful Reunification of the Korean Peninsula

Dear God, we pray for peace and reunification on the Korean Peninsula. We pray for healing and reconciliation. May the process be led by North and South Koreans, informed by your Spirit, which calls us to understanding. In your name we pray, Amen.