As the need increases, so do expressions of God’s love 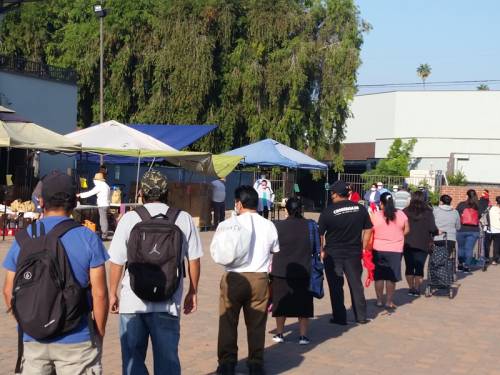 As the Rev. Jacoba Vermaak — people call her Pastor Kobie — talks with people who have begun lining up for a week of free groceries at 5 o’clock each Monday morning, she spends a few moments listening to each person describe how they never imagined they would be standing in line for a handout. Simply put, it was beyond what they expected for themselves.

“It breaks your heart,” she said, repeating the things she’s heard: “I’m so ashamed.” “I’ve worked hard all my life.” “Standing here is very humiliating.” As the pastor of Wilshire Presbyterian Church in Los Angeles, Kobie responds to each one:

“Everyone is experiencing the same thing.” “You are not alone.” “No one needs to be ashamed.”

Attending to those who come to the Wilshire’s food pantry is what Pastor Kobie signed up for. It’s what she wanted — to serve an urban congregation engaged in urban ministry — when she accepted the church’s call in 2012.  One of the main reasons she left South Africa in 2001 was because she felt that white people had no right to live there anymore because of the suffering they caused under the apartheid system.

“I knew I would have to work in a church like this. There’s no other way for me,” she said. “For the rest of my life I feel like I must pay for the sins for my forefathers.”

Wilshire Presbyterian Church is located in Koreatown in a very diverse neighborhood. Korean, Chinese, Taiwanese, Hispanic, Filipino, Bengali, Black and white people are just some of those who live there. As she walks the neighborhood, Kobie tells people that she lives “in the borderlands.” Two blocks west of the church is one of the richest neighborhoods in Los Angeles. It’s marked by huge yards and large houses.

The food pantry was started by a consortium of churches, mosques and synagogues 30 years ago. Prior to COVID-19 they gave food to about 100 people each Monday. Food recipients were mainly retirees living in nearby apartments who had to sometimes choose between buying food and paying their rent or utility bill.

But that all changed during COVID-19’s first lockdown in LA. Within two weeks, the church pantry was giving a week of groceries to up to 400 families, or roughly 1,600 people. The vast majority of the clientele are now people in their 30s and 40s. Those numbers grew even higher — to more than 400 families each Monday in November — which Vermaak said was the scariest month. Just as Los Angeles was reporting more virus cases since the pandemic started than anywhere else, the initial benefits from the CARES Act came to an end. Angelenos were facing yet another lockdown while the presidential election was going on.

“It was awful,” Vermaak said. “We were even seeing 18-, 19- and 20-year-olds, which was scary because it meant their parents couldn’t help them.”

Even though the number of people needing food has gone down slightly since November, Kobie said those running the food pantry are very concerned about what will happen once the pandemic is over.

“Once the country’s temporary eviction moratorium is over, how will people pay the backlog of rent that is due?” she asked. “We anticipate the numbers will go up again, even higher.”

How, then, does she keep hope alive in these difficult days?

“Oh my God, I’m from South Africa,” she said. “I grew up in the worst darkness — white, in a very racist environment. It was absolute darkness and hopelessness. The amount of suffering one can inflict on another human being is unlimited.”

Living through apartheid defines Vermaak’s theology. She knows what happens when people are demonized and dehumanized. Under her leadership, Wilshire Presbyterian Church created a motto that goes like this: “We are welcome, open and affirming. We’re very tolerant, but we’re not tolerant of intolerance.”

Dear God, you hear the cries of your people. We thank you for answering the prayers and for providing new hope and opportunities for them as an extension of your reign on earth. Amen.