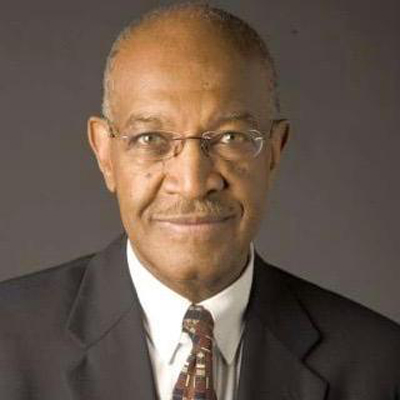 The Rev. Dr. James A. Forbes Jr. was the guest last week of the New York City chapter of the National Black Presbyterian Caucus.

The New York City chapter of the National Black Presbyterian Caucus was recently privileged to hear the prophetic voice of the Rev. Dr. James A. Forbes Jr. You too can hear Forbes’ talk here.

Forbes is senior minister emeritus of The Riverside Church in New York City and before that was a preaching professor at Union Theological Seminary, also in New York City.

Asked to talk about the blessings of Black love, Forbes initially stuck to the topic at hand.

For years, Forbes has been one to write poems and songs. He gave one, which he said was about “the blessedness of Black love,” to his wife’s chorale, the Ebony Ecumenical Ensemble, to sing: “I expected mission impossible, a call to service far away, but instead this gentle assignment God sends to us each day: Love my children, that’s all I ask of you. Love my children, that’s all we’ve got to do. If you love them as I love them we shall see them safely through. Love yourself, love me too, and whatever else you do, love my children.”

The Black community’s “vulnerability in the face of COVID-19 reveals that every day we find ourselves victims of circumstances which have compromised our immune system,” Forbes said. “We also found when it came to testing we were last in line. In the early phases of the vaccine, we had to fuss, fight and fume to make sure that the naturally ingrained pattern of last and least would not be visited upon us in the wake of this pandemic.” Many churches and other organizations are working to make vaccination and testing efforts more equitable, “but it’s very clear that if nobody else is going to love us, the blessedness of the Black community should be love that begins at home,” he said.

Or, to put it in the words of another Forbes poem: “Stop the virus of hate from spreading across the land, Bigotry is a deadly weapon the nation cannot stand. The ‘isms’ of division and the seeds of fear will start an epidemic throughout the atmosphere. The spirit of our nation is desperately pleading today: This is our blue-green planet, don’t let hatred take it away. Take the vaccine of love in a hurry, Let’s spread it far and near. Teach it and preach it everywhere until the air is clear.”

Two years ago, while writing a chapter for a book his goddaughter was editing on the 400th anniversary of the arrival to these shores of the first enslaved people, Forbes said he ran across what he called “the biblical quadricentennial,” found in Genesis 15:12-14. In the biblical account, Abram falls into a deep sleep. God tells Abram his offspring will be aliens in a land that is not theirs. They’ll be slaves there, oppressed for 400 years, when God will “bring judgment on the nation that they serve.” After that, they’ll come out “with great possessions.”

“I asked God a question,” Forbes recalled upon rediscovering that story. “God, I see that after 400 years of brutality and dehumanizing activities, you couldn’t stand it any longer. You decided, I’m going to do something about this, and you sent Moses to Pharaoh,” who told Egypt’s ruler, “Let my people go.”

“Since God and I talk plain,” Forbes went on, “I asked God, ‘That was the biblical quadricentennial. What about ours? It’s the 400th year coming up now, God. Do you love us Black people as much as you love the Israelites?’ The Spirit said to me, ‘I love my Black people and I love my white people and yes, I am going to do something dramatic in the direction of your liberation.’”

“Since those words, I’ve been a different person,” Forbes said. When God says, “I’m going to give a dramatic demonstration of my determination to bring deliverance,” it’s not just for Black people, Forbes said, “because your bondage is mutually connected. I’m going to bring deliverance,” he said, quoting what the Almighty told him, “to people who are oppressed and who are oppressors.”

Open our eyes, O God, to see your way. And if your eyes aren’t ready to see, open our hearts to the movement of the holy Spirit. Keep pointing us in the right direction. We want to answer your call, our Rock and our Redeemer. Amen.