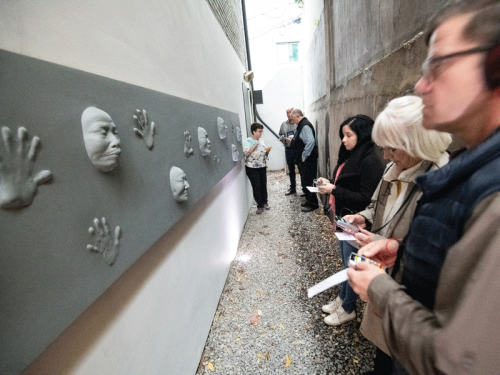 Presbyterian Peacemaking Travel Study Seminar participants come face to face with relief sculptures of “Comfort Women” at the Women’s Human Rights Museum in Seoul. Comfort women were young girls forced to work in Japanese military brothels prior to and during World War II. Atrocities committed during the war were the impetus for the Universal Declaration of Human Rights. (Photo by Gregg Brekke)

The Presbyterian Church (U.S.A.) Office of Public Witness in Washington, D.C., presented this year’s CPJ Training as a two-day event, starting Tuesday with a panel discussion on international work. The event continues at 2:30 p.m. Eastern Time Wednesday with a look at CPJ’s domestic work on civil and human rights.

CPJ Training organizers are also encouraging participants to sign up for Ecumenical Advocacy Days, a virtual event Monday through Wednesday (April 25-27) next week. Like the Presbyterian event, EAD is focused on civil and human rights this year. PC(USA) staff will be involved in several EAD workshops, and CPJ Associate Director of Advocacy the Rev. Jimmie Hawkins will emcee the event. 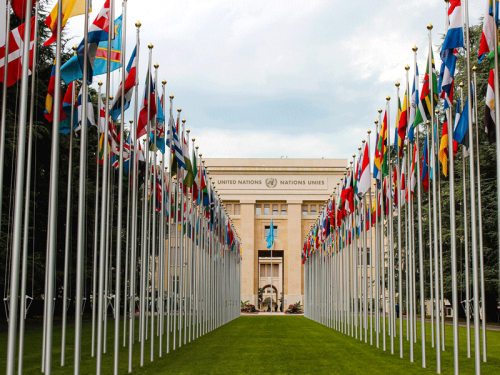 The United Nations General Assembly’s Universal Declaration of Human Rights was the basis for the discussion of staff from several of the Presbyterian Church (U.S.A.)’s Compassion, Peace & Justice ministries on the first day of CPJ Training on Tuesday. (Photo by Mat Reding via Unsplash)

Moderator Catherine Gordon, OPW’s Representative for International Issues, lead the panelists through a discussion framed by the Universal Declaration of Human Rights, which was declared by the United Nations General Assembly in 1948 following the atrocities of World War II. Gordon addressed the theological basis for supporting the declaration, reading from the World Council of Churches’ 1978 statement on the church’s work in human rights:

“All human beings are created in God’s image to be equally, infinitely precious in God’s sight and ours. Jesus Christ has bound us to one another by his life, death, and resurrection, so that what concerns one of us concerns us all, that God’s will and love are intended for all, and the struggle of Christians for human rights is a fundamental response to Jesus Christ.”

Gordon then turned the discussion to how the church addresses human rights in its work around the world.

“The statement in itself is very aspirational,” Kang Bartlett said. Inequality, he noted, starts almost immediately after conception, as a child’s survival and development depend greatly on the circumstances into which they are born.

“In a refugee camp, or for many other reasons, if the child doesn’t have a nurturing environment of safety, of comfort and care, there’s no equality or dignity,” Kang Bartlett said. “So, the Hunger Program, for its part, supports groups who are struggling against poverty, corruption and conflict, especially supporting groups who promote prosperity through agricultural training, sustainable community development, and through advocacy to address violence and harm by the state, and by corporations.”

González-Castillo said that PDA frequently encounters governments that ignore the human rights of communities, particularly those of indigenous and minority groups, when responding to disasters. To address that, he said PDA is intentional in working with organizations that respond to the needs of communities that are underserved and in need of assistance.

Bidart said that in its anti-poverty work, SDOP is intentional in partnering with groups led by women in nations such as Panama and the Dominican Republic, because “working to improve their living conditions provides more income for the family. And when they do that, they are raising their dignity.”

The discussion also touched on how other CPJ ministries addressed human rights, such as advocacy work by OPW, the Presbyterian Ministry at the United Nations, and the Committee on Mission Responsibility Through Investment; the education and advocacy work of the Presbyterian Peacemaking Program and Office of Gender, Racial & Intercultural Justice, and the policy and research work of the Advisory Committee on Social Witness Policy, which helps craft a lot of Presbyterian policy.

“I had a professor years ago in economics who said that a Salvadoran farmer is often more impacted by who’s president in the United States than the farmer in Iowa,” Krehbiel said. “So yes, as U.S. Presbyterians, we can have a certain role that really does relate to the protection of human rights not only here in the United States, but around the world.” 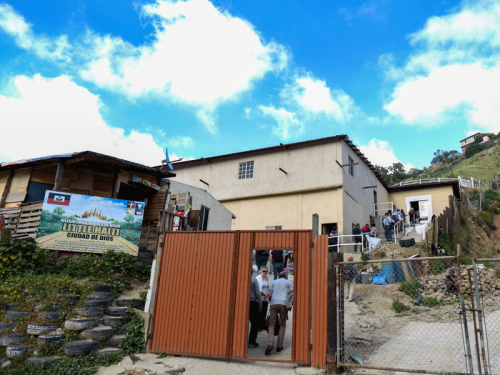 A shelter in Tijuana, Mexico is named “Little Haiti” due to the large number of Haitian refugees in the city and shelter hoping to gain entry into the United States. (Photo by Rich Copley)

Click here to give to one or all of these organizations.