Mark and Jenny periodically visit the U.S. and are able to visit congregations as their schedule allows. Email them to extend an invitation to visit your congregation or organization.

In 2012, Jenny began partnering with the Iglesia Evangélica Dominicana (IED) as it prioritized reaching out to the marginalized communities served by its churches. The IED invited her to begin a pilot project using Community Health Evangelism (CHE) in the community of Batey 7, one of some 15 or more settlements among the sugarcane fields of the Dominican southwest. The goal of CHE is to equip communities to identify and mobilize the resources they already have to engage with the issues they face and work for positive and sustainable change. The response of community leaders from Batey 7 was ultimately very positive, and in 2015 the IED took CHE to the national level and began introducing it to every region of the country.

Mark has been working with Presbyterian World Mission since 1997. After working in a reforestation program in Haiti for a year, he spent six years in Nicaragua focusing on developing agricultural systems and providing practical training for rural families. In 2004, he began serving in Haiti with the Farmer’s Movement of Haiti (MPP) and was able to apply much of what he had learned in Nicaragua to his work at the MPP’s National Training Center. Joining Mark in Haiti after their wedding in 2008, Jenny served with MPP as a volunteer in their rural health clinic. After moving to the Dominican Republic in 2012, Mark traveled to Haiti on a monthly basis, continuing to train teams of farmers in yard garden production techniques with Haitian farmer movements. He also began learning about CHE alongside Jenny and applying its holistic techniques to teaching vegetable production.

In January 2020, Jenny and Mark will bring all that they learned from their work with Dominican and Haitian communities to Costa Rica. In their new positions, they will promote environmental sustainability with the Latin American Biblical University (UBL), an ecumenical seminary on the eastern edge of the San Jose municipality in Costa Rica.

At the UBL, Jenny and Mark will collaborate with students, professors, administrators and support staff to create an integrated management plan that brings together the gifts and skills of the whole university community. A critical step in developing the plan will be creating a hand-drawn map of the two-acre property, a practical technique for strengthening community spirit that Mark and Jenny discovered through their CHE work in the Dominican Republic. A critical objective of this work is to nurture a common vision and mutual understanding as the group lays out workable strategies that lead the institution towards sustainable ecological practices.

In addition to working within the UBL community, Mark and Jenny have been called to help the university reinforce its links with the surrounding neighborhood to bring together more and more people with a passion for integrated agriculture. With the support of the larger community, the university hopes to create a safe place within the UBL grounds for testing holistic techniques to produce food, medicinal therapies and flowers. This work will seek to embody a practical theology that potentiates local resources, feeds the body and the soul, and challenges dependency on global food markets.

Costa Rica borders the Pacific Ocean to the west, the Caribbean Sea to the east, Nicaragua to the north, and Panama to the south. It has one of the highest life expectancy rates in Central America. Tourism and commerce are Costa Rica’s main industries, accounting for 68% of its GDP. It has a growing technology/computer chip industry, and its main agricultural products include bananas, coffee, sugar and beef. In spite of its well-established commitment to social welfare and education, Costa Rica is increasingly dealing with critical issues such as poverty, political crisis, drug trafficking, sexual tourism, domestic violence and the impact of mass immigration from Nicaragua due to poverty and political crisis in this neighboring nation. Although Costa Rica has some of the most favorable economic indices in Central America, the percentage of the population living in poverty has increased significantly in recent years.

About three-quarters of Costa Ricans are Roman Catholic, and approximately 15% are Protestant.

About Jenny Bent and Mark Hare

Even as a child, Jenny Bent felt that her primary calling in life is to love others as herself. She explains, “In the moments when I act in love, I feel something that is very deep and makes me grow. Just like babies laugh because they feel something is good, without anyone teaching them. Since birth, even before being baptized into the church, I have been called to love with all my senses and wisdom.”

Jenny’s work in Community Health Evangelism (CHE) in the Dominican Republic provided her with abundant opportunities to practice love through walking alongside, listening to and supporting communities as they determined what they needed to thrive. As she continues her ministry of presence in Costa Rica, Jenny looks forward to being present with and learning from Costa Rican communities and refugees from her native Nicaragua who have fled to Costa Rica. Moreover, she believes the people she and Mark will encounter through the UBL will contribute to her growth as a CHE facilitator. She anticipates learning from UBL seminarians about the theological bases for CHE and about the valuable things they have learned from their parishioners. In turn, Jenny hopes that “seminarians will learn something about CHE and make it uniquely theirs.”

Caring for the environment is at the core of Mark’s call. “I believe that my particular calling is to love the Earth and be intimately involved with the natural world,” he says. He sees working with the UBL, a seminary that recognizes the connection between theology, community development and the environment, as an honor. His experience as a mission co-worker in Haiti and the Dominican Republic have demonstrated that such practical theology is vital: “Applying principles of CHE in my work with rural families in Haiti and marginalized urban families and congregations in the Dominican Republic, I came to appreciate how important it is to address people’s spirituality in helping them move towards sustainable community development.” The UBL, he believes, will help him better understand how to “make the connection between what we believe and living it.”

Jenny is originally from Nicaragua. Her father, Norman Bent, is a retired pastor of the Moravian Church and a long-time social advocate in ecumenical programs for peace and justice. Her mother, Modestina, was a Sunday school teacher and very involved in her local women’s group. Jenny is the third child of a family of five. She attended college at the National Autonomous University of Nicaragua, where she received her bachelor’s degree in laboratory science. Her special interests include sewing, crocheting and growing roses.

The youngest of five children, Mark grew up in southeast Ohio in the foothills of the Appalachians. His father, Frank, is a retired pastor who has also been involved for over 30 years with the Coalition for Appalachian Ministry, an organization of Reformed denominations that helps connect and support community-based organizations. At 91, Mark’s mother, Catherine, remains passionate about Christian education, which she helps lead for the Amesville-New England parish. Mark has a B.A. in environmental studies from Warren Wilson College and an M.S. in forestry from Michigan State University.

Watch a video of Mark Hare and Jenny Bent 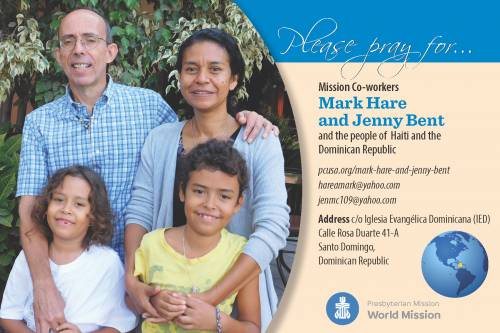 Use this card as you pray for Mission Co-workers Mark Hare and Jenny Bent. The card includes a photo and overview of their work. From…