A Letter from Mark Hare and Jenny Bent, serving in the Dominican Republic and Haiti

I am writing on Tuesday the 26th of December, still full from turkey leftovers. Keila and Annika are playing with Annika’s new set of pots, pans, spatulas and other kitchen toys — things she asked for in her very first letter to Santa. This morning I worked with her putting together her first Lego models from her brand new “Junior” kit while Keila finished up her Lego helicopter set — the kind that puts out fires, with a burning building included. Jenny and I have also been helping Keila with her 500-piece puzzle filled with tropical waterfalls and colorful tropical birds. Keila asked Santa for a toy parrot, so she got a puzzle with toucans. Santa is quirky.

Christmas Day was a blessing in both expected and unexpected ways. God is, after all, even quirkier than Santa. Jenny and I expected the girls to be excited as they unwrapped gifts, exclaiming over each one. We were happy that Fiona, our overgrown puppy was also appreciative. When Jenny unwrapped her new rope toy, Fiona immediately took it outside to play, eventually bringing it back in all slimy and clearly asking us to join in the fun.

After opening the gifts, Jenny and the girls went to church. Church on Christmas Day is a traditional blessing for us, although I stayed home and prepared the turkey. While I cooked, I listened to the latest Science Friday podcast, which focused on everything that we still don’t know about the physics of our Universe. It could not have been more appropriate for the day when we celebrate together the mystery of God incarnate, holiness born in a rustic stable. Science brings the beauty and mystery of Creation into better focus for me, God’s joy apparent and deeply interwoven with everything I learn.

Our holiday took a different turn when we sat down to share the turkey dinner. In the Community Health Evangelism (CHE) work that Jenny and I are part of here in the southwestern region of the Dominican Republic, serving in partnership with the Dominican Evangelical Church (IED), we have come to be particularly close to small groups of people in each of the four communities where we serve. Among these are our two friends José and Juan from Batey 7. Both José and Juan left their community last year, in search of education and viable employment, respectively. Both recently returned for Christmas, and we invited them to come eat Christmas dinner with us. Neither one eats turkey, or hardly any meat at all, but they agreed to come anyway. And they knew I was cooking!

It’s fun to be with José and Juan. They have interesting things to tell about their lives and about Life. They are faithful Adventists and they share their understandings without hesitation, even as they also accept Jenny and me for who we are and how we express our faith. But yesterday our focus was not on religion. They wanted to talk about the work of CHE in Batey 7 — specifically how Jenny and I might best support that work in 2018. José and Juan were ready to share their ideas, and once they started it was a little overwhelming! At one point, José paused and said, “Mark, you like to tell us, ‘Stop talking and write these ideas up on the newsprint!’ I am surprised you aren’t doing that here ….” So I did.

José (far left) from Batey 7 participating in a workshop with two new members of the Batey 7 committee in August 2017. José took advantage of a break from his studies at the Adventist University to receive CHE training (Training for Trainers 1) together with Eduardo (center) and Simena (far left). 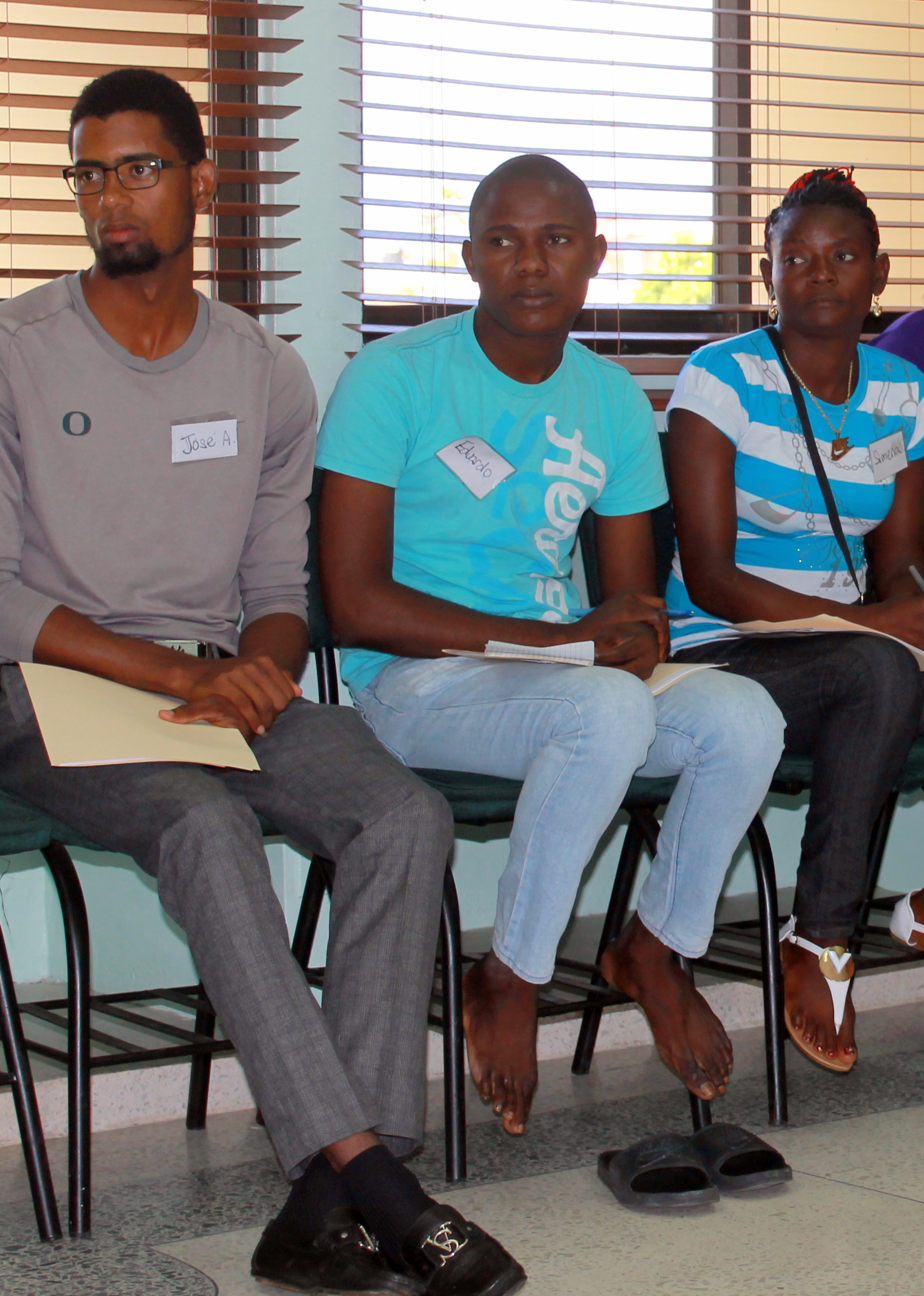 I think there are three of the ideas and observations that José and Juan shared that we may find particularly important. The first point that the two friends emphasized is that the committee needs to be better trained in the basic techniques of popular education and community organization. Jenny and I know this, but we have felt challenged just getting the same people to come together each week for simple meetings. Imagining how to get these folks together for an extended workshop has just felt hard. But José and Juan made it clear that we have to find a way. José pointed out that having a trained committee will allow them to begin training and organizing others in the community. “For example,” he said, “the youth.”

Juan went on to observe that the youth of the community can be the motor for the committee; they can make things happen. The youth have energy and, at least in Batey 7, they have the will to participate. We saw this in an initiative that sprang up during the month of October, when a group of youth stepped up, supported by the committee, to demand accountability from the local municipal leaders for project funds that lacked complete clarity. Juan challenged us and the committee to develop practical and systematic ways to keep that energy flowing, to make sure, for example, there is follow through when the youth suggest some action or make a commitment.

Finally, José and Juan shared their optimism about the CHE committee. They observed that the people of Batey 7 have seen that the committee works very differently from other organizations and, they shared, it has earned profound respect for that. The CHE committee, they said, consistently works for the community and not for the benefit of the committee members themselves. We know that Juan and José played key roles in building that reputation. They plainly still feel ownership for the work. It was clear that they want the committee to continue to be present and accounted for, and they let us know that they were counting on us to help make sure that happens.

It was a startling afternoon. Jenny and I were clearly not in charge of the conversation. Our ideas were valued and respected, but ultimately we were being advised, guided and motivated. It was an unexpected blessing, an excellent way to start our work for the new year — provoked by our former “students” to keep the faith and be steady in our work. Christmas day started with traditional holiday traditions from a privileged life. It ended with clarion call to keep moving out from our safe place into the lives of people around us, people who even with their difficult and seemingly limited situations demonstrate to us how to live grace-filled and abundant lives.

This letter may not reach you until sometime in February or even March. Nevertheless, we would like to offer to you something of what José and Juan offered us for the New Year. We offer you the challenge of moving out from your safe places to discover new places of belonging, to be with people in new ways or with new people of different ways, open to the gifts others have to offer, even when the gifts may seem intangible and hard to detect. It would be a special blessing if you were to share your stories with us!

And always, we are so grateful for your support of this work and service of which Jenny, Keila, Annika and I are privileged to be a part.

May God be gracious to you in all ways this year.