A letter from Mark Hare in the U.S. on Interpretation Assignment from Haiti/Dominican Republic

Individuals: Give online to E200356 for Mark Hare and Jenny Bent’s sending and support

It has been quite a ride these last six months, but by the grace of God, Jenny, Keila and Annika and I seem to have made it safely through a storm of change, leaving Haiti and the Dominican Republic and coming at last to a place of relative calm here in Amesville, Ohio, where we will be based for the next 12 months.

Jenny and I have been mission co-workers serving together on the island of Hispaniola for the last three and a half years. The main focus of my work has been in Haiti, serving with MPP (the Peasant Movement of Papaye), working with the MPP-FONDAMA Yard Garden Program. Jenny has been serving with the IED (the Dominican Evangelical Church), working with the Good Samaritan Clinic in Batey 7, a community of descendants of workers brought from Haiti to cut sugarcane.  Jenny and my current term (Jenny’s first and my sixth or seventh) was programmed to end in December 2014, but PC(USA) World Mission approved an extension, in theory to bring our respective work to some type of closure before coming to the States for a year. Apparently the Holy Spirit had other ideas. 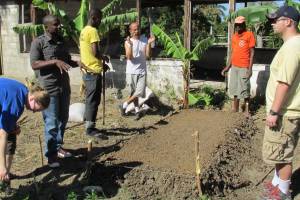 Members of First Presbyterian Church, Newark, Ohio, and members of the Peasant Movement of Bayonnais participating together in a yard garden workshop. January 2015. Haiti. (Photo by Herve Delisma)

In January the work in Haiti began well. The Haitian team had two intense weeks of follow-up visits to the homes of current participants and we held an excellent yard garden workshop for a group of new participants from the Bayonnais farmer organization. A mission delegation from First Presbyterian Church of Newark, Ohio, participated with us in the work of Bayonnais. Work continued to go well in February with home visits and another workshop, this time with farmer organizations in the municipalities of Léogâne and Verettes. March went well also, but in April we discovered that administrative complications would delay the arrival of new funds for the project until after I left for the States. My focus on getting things done had to stop. Instead, I worked on preparing Herve Delisma, my Haitian associate, with tools to plan and carry out the activities, supported by MPP’s technical team. In early June, during my last visit to Haiti, Herve and I put together a proposal for the work and MPP’s administration approved it. Rather than closure, the last months in Haiti turned out to be about setting the stage for a series of new beginnings.

In the Dominican Republic Jenny’s work with the community health committee in Batey 7 began really taking off this past February with the visit from six women representing Westminster Presbyterian Church in Greenville, South Carolina. During that visit the committee organized the cleanup of community drainage canals and coordinated assistance to three families that needed new roofs. Committee members gained self-confidence and noted a new level of respect for their work on the part of their community.

After the February visit the committee took on several projects. The most ambitious was a community basketball court. Carly Mayer, a Peace Corps volunteer, began working with the committee to meet the requirements that would allow the community to receive assistance for the court from “Courts for Kids.” One of the requirements was to find local donors for part of the materials. The committee worked on several strategies. In May the Batey 7 community’s mayor agreed to come up with $RD 100,000 (about $US 2,250) worth of the needed materials. The project moved forward and respect from their community moved up another notch. 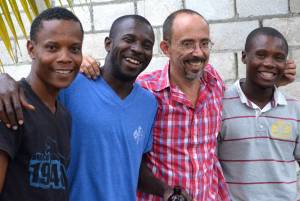 Key team members for the MPP-FONDAMA Yard Garden Program. Herve Delisma, second from left, is the primary leader for carrying out the program for the rest of 2015. Verettes, Haiti. March 2015. (Photo by Cindy Corell)

The energy in the health committee also increased the last days we were in the DR when one of the key members, Juan Batista, participated in a weeklong Training of Trainers workshop, led by Flor and Hiran de Leon. Juan came back from that training wired to jump back into the work of the Batey 7 community. Flor and Hiran are leaders for the Community Health Evangelism work in the Dominican Republic and they are the couple who trained Jenny and me in the same techniques that Juan learned.

We rejoice in Batey 7 committee’s renewed sense of purpose, but we feel very little closure. After three years working in the community, now things are really starting to happen!

We are also sad to leave during the current social and political crisis that is affecting our friends in Batey 7. In September 2013, Dominicans born of Haitian or Haitian-descent parents were stripped of their citizenship by a ruling of the supreme constitutional court of the Dominican Republic. Up to 200,000 Dominicans of Haitian descent are stateless in the eyes of Dominican law. This has also led to a growing crisis along the border, where people without paperwork from either country are gathering in makeshift refugee camps.

One thing that we will certainly remember from our last weeks in the DR are the Dominican friends who helped us—in painting the rented house where it needed painting; helping move my vegetable tires and Jenny’s flowers to new homes; sweeping; washing; cleaning. They kept Jenny and me this side of insanity, and Keila and Annika from feeling abandoned by their frazzled parents. Although sad to leave our friends, we can say that there was closure when we left that house on Anacaona Street in the Dominican city of Barahona. Wherever we live when we return to the Dominican Republic in 2016, we will not be in the same house. 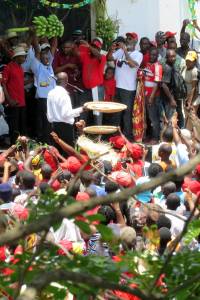 Chavannes Jean Baptiste (second from left), with a raceme of bananas lifted over his head. Chavannes is the founder of the 42-year-old farmer organization, MPP. He resigned as executive director at the end of June 2015 to run for President of Haiti. Hinche, Haiti. May 1, 2015. (Photo by Herve Delisma)

Our arrival in the States was a mirror image of our departure from the DR. Friends and family received us with open arms, helping us with house, car and furniture. We received, to name a bit: a desk, dresser and lamp from my parents; a toy chest and child’s dresser from the girls’ godparents; dish and cookware from siblings; Amish-built chairs from a retired schoolteacher; beds and lamps from the former tenant of our new house. We are living in a patchwork quilt—a home that family and friends began stitching together before we arrived. These first weeks here in Ohio speak to us of people acting out God’s presence through hospitality. We cannot live long enough to express our gratitude.

As Jenny and Keila and Annika and I begin to breathe deeply again, our next task is to reach out to you, our friends and siblings in Christ who have been supporting us with your cards, your e-mails, your prayers and your financial contributions. These next 12 months while we are based here in Amesville are dedicated to connecting with you, to offer you our stories from the work of God in Haiti and the Dominican Republic. Please help us get in touch.

P.S.  We rejoice that because of your prayers and generosity, we are well supported. However, World Mission has experienced a serious shortfall in contributions this year; we have colleagues who remain uncertain about their future.  Please consider supporting mission workers like us through a gift to World Mission.