A Letter from Mark Hare and Jenny Bent, serving in the Dominican Republic and Haiti, but presently in Florida

Jenny, Keila, Annika and I spent the first two weeks of December in southwest Florida, and we had a series of wonderful experiences that we would like to share with you all.

It may surprise you to hear stories from us about southwest Florida. As most of you know, we all are serving with the Dominican Evangelical Church, helping promote and advance their program of Community Health Evangelism (CHE). CHE is a program of community-focused, assets-based, sustainable development that works to integrate the spiritual with the physical, the emotional and the intellectual (chenetwork.org/what.php).

It was CHE, in fact, that took us to Southwest Florida. Medical Ambassadors International, the organization that initially created the CHE approach, had their annual Latin America and Caribbean meeting in North Fort Myers, and they invited our family to participate. The five days we spent with the MAI team were enlightening. This was the first time that Jenny and I have had such an extensive experience with people from the very organization that initiated the development strategy we’ve been learning about and working with for almost five years now. We were also able to network with individuals with specific skills. Marcelo and Sylvia, for example, got high marks from a Cuban colleague for their skill in helping CHE participants develop viable small business enterprises, one aspect that Jenny would like to explore with the folks in Batey 7.

Another excellent opportunity in Florida was a trip to Immokalee with our friend Rick Burnette. Rick has been working at ECHO (Educational Concerns for Hunger Organization) for many years now, and MAI held its December meeting at ECHO’s agricultural center. The folks at ECHO provide people like me with ideas, training and research that can help families growing food under difficult circumstances thrive.

Rick and his wife, Ellen, are spearheading “Cultivate Abundance,” a new initiative of the Peniel Mission that will work to bring community gardens to the immigrant farm workers of Immokalee. 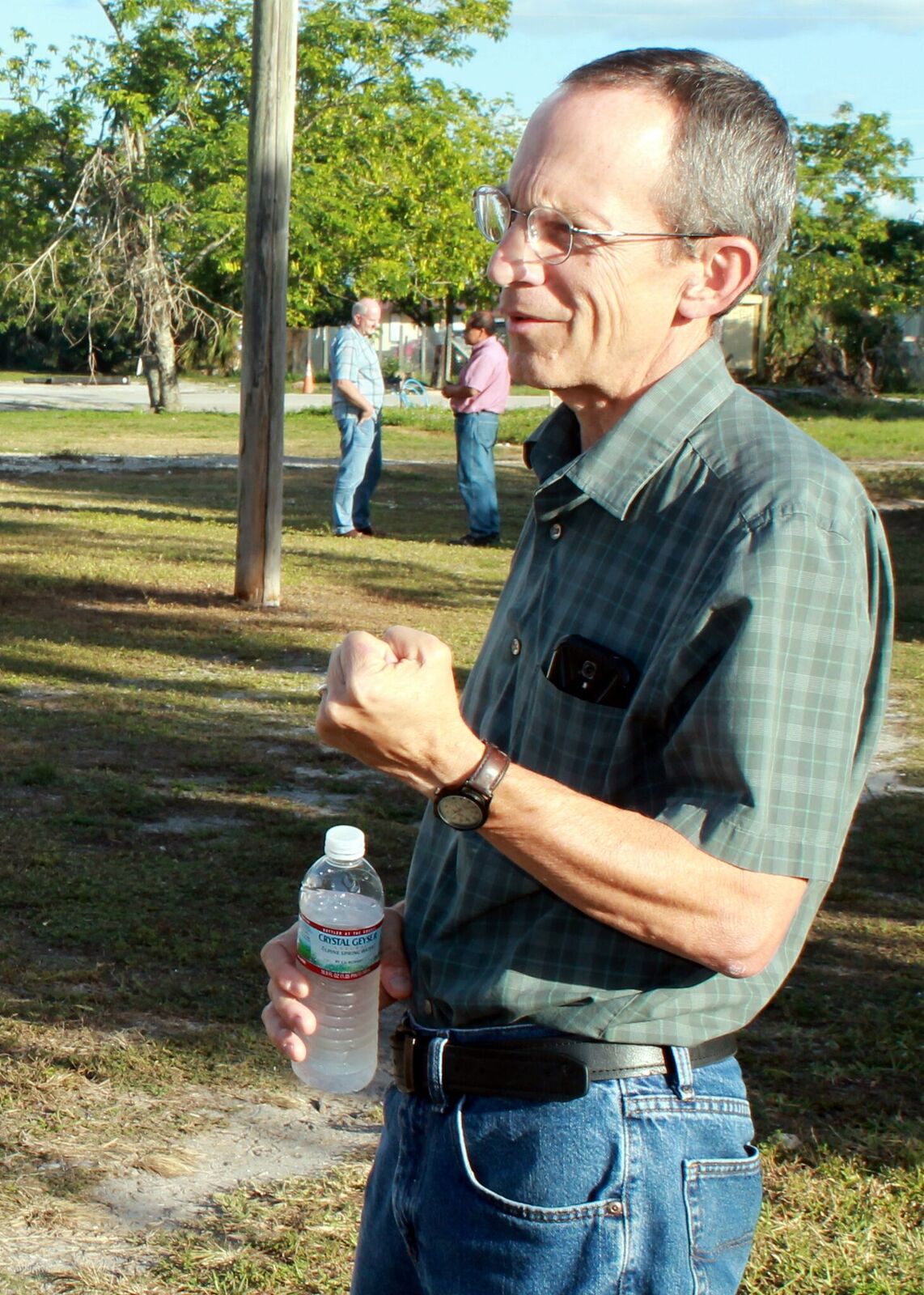 As it turned out, Rick and his wife, Ellen Burnette, have volunteered for some time at Peniel Mission in Immokalee, and he invited us to go along for one of his visits. Misión Peniel describes itself as “… a vehicle for people of faith to respond to a call for compassionate service to complement the focus on social justice provided so aptly through the Coalition of Immokalee Workers.”

As Jenny and I understood, the Coalition of Immokalee Workers focuses on social action. The leaders have helped organize the immigrant agricultural workers into something like a labor union. These workers harvest a very large proportion of the tomatoes that you and I purchase, either directly at supermarket chains like Kroger, or indirectly, in the tacos and hamburgers we buy at fast food chains like Taco Bell and Wendy’s. One of the accomplishments that the Coalition has achieved over the last several years is to sign agreements with fast food chains that guarantee tomato pickers receive better pay for every pound of tomatoes they pick.

While Misión Peniel supports the social action of the Coalition, their focus is to deal with the daily emergencies of community members, striving to provide something of a safety net while building relationships. When Hurricane Irma brought flooding and extensive wind damage to the community this past October, the Mission very capably organized the generous donations of food, clothing and furniture that came as a response, making sure community members received according to their need.

With Rick Burnette and his passion for agriculture, the director of the Mission, Rev. Miguel Estrada, is beginning to plan a community garden in the ample space behind the new building they were recently able to rent. When we went to look at the space that Rick hopes to transform into a garden, it felt like we were back home in the Dominican Republic, with roosters and hens wandering everywhere. Rev. Miguel explained that he uses the abundance of the fowl to measure the general well-being of the community. When work is good, the chickens abound. When times get tough, they start disappearing into the pots of families struggling to keep food on the table.

Rev. Miguel also gave us some insights into the dynamics of the people who come to Immokalee. Miguel Estrada is originally from Guatemala, and during his visits home he has traveled from the capital city up into the mountains, visiting the communities where many of the men working in Immokalee are from. He told us that in sitting with families who shared photos of their husbands and sons, he sometimes could name each one of them, all of them now members of the Immokalee community. There is one town in Guatemala, he told us, that has lost every single man. “They call it, ‘Women and Children Town,’” Rev. Miguel said. One by one, all of the men have left, traveling thousands of miles to reach southwest Florida. “One of the reasons community members live hand to mouth is they send every available dollar back to the families they left behind.”

“Why do they sacrifice so much?” we asked.

“Because,” Rev. Miguel said, “they believe that they will create better lives for their families.” “From our experience in Haiti and the Dominican Republic,” I observed, “that doesn’t always happen. Sometimes young people become complacent, depending on the money transfers they know will come from their relatives, rather than developing their own skills and abilities to make a decent life for themselves.” Rev. Miguel nodded his head. “That’s true,” he acknowledged, “but the men here believe what they are doing is the best they can do.”

The lives of the people of Immokalee are not easy, but overall, this was a good visit. Listening to Rick and Rev. Miguel dream together about the community garden they hope to start soon, I got very excited. I was also excited that the community is one of both Spanish and Haitian Creole speakers. Jenny says she thought at one point I was going to jump out of my skin. But then it dawned on me that what Jenny and I are doing here in the Dominican Republic is the other end of God’s mighty rainbow.

What I mean is this: Rev. Miguel, Rick and Ellen Burnette and the other volunteers in the Misión Peniel are providing bridges to dignity; they are exemplifying hospitality to strangers in a strange land. That makes them a base for God’s covenant rainbow here in the United States, helping people move from misery and humiliation into God’s Promised Land of abundance. Jenny, Keila, Annika and I are at the other end of the arc. Jenny and I, through CHE in the Dominican Republic and agricultural work with the Peasant Movements in Haiti, are sharing practical, applicable techniques for community organization, improved agricultural production and biblically-based spiritual growth. Working with local community members who have caught the vision, we are helping create a space where the Holy Spirit can blow into people’s lives and change their reality, demonstrating to them that God does provide the resources God’s people need to live abundant lives right where they already are.

Southwest Florida, southwest Dominican Republic. I don’t have to be present there to be part of the work. We are already part of the same vision here, two ends of the same arc, God’s covenant of abundant life: physically, emotionally, intellectually and spiritually.

“8 Then God said to Noah and to his sons with him, 9 “As for me, I am establishing my covenant with you and your descendants after you, 10 and with every living creature that is with you, the birds, the domestic animals, and every animal of the earth with you….” Genesis 9: 8-10

Thank you so much for your part in making this work and these connections possible!