A letter from Mark Hare in the U.S., on Interpretation Assignment from Haiti and the Dominican Republic

It hardly seems possible that a whole year has gone by since Jenny, Keila, Annika and I moved here to our small rental house in Amesville, Ohio. So much has happened! We have visited new places and met so many new people. My rough calculations the other day revealed that we made presentations to at least 60 different organizations. Most of these were church-related, but we also presented to the annual International Agricultural Conference hosted by ECHO (http://echonet.org/); Jenny and I also held mini workshops on Community Health Evangelism with three different groups, including a teacher’s association of which my mother is a member. We made presentations in Ohio, Michigan, Kentucky, Pennsylvania, New Jersey, Maryland, Virginia, North Carolina, South Carolina, Tennessee, Georgia, Florida, Alabama, Kansas, Missouri, California and Washington. We had the opportunity to participate in several children’s programs, one high school Sunday School class, and many adult programs. I won’t hazard to say how many potlucks we attended, but I might be able to tell you which one had the best bean dish.

The year has gone round and now we are in June, almost exactly one year after we arrived in 2015. Keila and Annika have finished their school year and with summer vacation Jenny and I have had a little time and space to begin reflecting on what all this has meant to us. What I want to share in this letter is one unique piece of this yearlong tempest that was not actually in the States. In January I had the privilege of spending three weeks in Haiti and the Dominican Republic. It was a crazy time but filled with so much hope and energy that I came back to the States feeling prepared for the onslaught of church visits this past spring.

Monday, January 11, I flew to Port au Prince, Haiti, where I was met by a driver from MPP, the farmer organization with which I have been serving since 2004. The next day, after working through repairs for the project truck with the help of friend and MPP colleague Moïse Alvarez, I drove to Papaye with Herve Delisma, the assistant for the MPP-FONDAMA Yard Garden Project. Since 2012 Herve and I have been working together to provide three independent farmer organizations training and support as they work to establish yard gardening programs similar to the one that MPP has developed in Haiti’s Central Plateau. Funding for our work came from Presbyterian Disaster Assistance (PDA) and the Presbyterian Hunger Program (PHP). 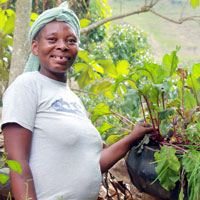 Eveline Demelis, from the mountains of Léogâne, shows off her vegetable tires with beets, chives and tomato seedlings. Eveline and her husband, Esterne, have kept about eight tires in continuous production since early in 2013. January 2016. Photo by Mark Hare.

During the next two weeks Herve and I and a team of six other Haitians visited a total of more than 50 families scattered through the mountains of the municipalities of Léogâne and Verettes and the municipal section of Bayonnais. Despite the long dry season that had begun one month too early, most of the families we visited were doing great work!

In Léogâne, Esterne and his wife, Eveline, showed us the 10 vegetable tires that they have kept in continuous production since Esterne first hauled the tires up the mountain in 2013. Two of their tires were filled with tomato seedlings that Esterne would plant out in the larger garden as part of his commercial production.

In Verettes, Herve came back after our first day there and shared the story of Renaud Renier, who lives in the remote community of Lakwa high in the mountains of Verettes. Although Lakwa is an area where the only local source of water is the rain, Renaud has not let difficulties with water prevent him from developing his home garden. Renaud was not feeling well and received Herve and the team lying down. But his zeal for the work still came through in Herve’s report and in the pictures. I remember visiting Renaud for the first time in March 2015 and listening for half an hour as he enthusiastically shared his extensive knowledge of medicinal plants. 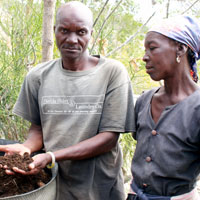 Lechène Alexis and his wife, Aliana Alisme, from the community of Marouj in the municipal section of Bayonnais (Gonaïves), showing us their tires filled with African redworms and redworm compost. January 2016. Photo by Mark Hare.

There are many fine yard gardeners in the farmer organization of Bayonnais,but some of them live where the water during the dry season is not easily accessible. Lechène and his wife, Aliana, live in one such place. At the end of 2014 Lechène hauled over a dozen tires to his yard. In Herve’s reports from 2015 he notes that the family had all of the tires in production, filled with spinach, garlic chives, tomatoes, cabbage and other crops. Lechène and Aliana planted the rest of their hilly yard with bananas, papaya and different root crops. The family also began producing moringa, a tree with nutritious leaves full of Vitamin A, iron, calcium, Vitamin C, and complete protein. But when we arrived in January the tires were bare and the crops in the ground were yellow. Lechène asked me why I had waited to come until everything was dried up, but the evidence of the family’s hard work was evident to me. Even more remarkably, Lechène and Aliana had three tires that were still full of life—redworms. Sometime in 2015 Lechène had brought to his house a handful or so of African redworms (Eudrilus eugeniae) to help compost the dry donkey, horse and cow manures. The family had taken good care of them, even with the difficulty of finding water for themselves; the worms were reproducing exponentially and returning high quality compost in payment for the family’s care. 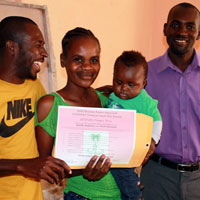 Herve Delisma (left), the assistant coordinator of the MPP-FONDAMA Yard Garden Program, and Viljean Louis (right), the coordinator for the Farmer Movement of Bayonnais, presenting a certificate of achievement to Aliette Baptiste, from the community of Demòn, for the excellent development of her yard garden.

In each of the three regions we spent two intense days of wandering through the hills. On the third day we gathered with the leaders of the respective organizations, the participants in the program, and other invited guests. Together we celebrated the year with words, song, prayer and food. Besides monitoring each home, our team had evaluated each yard, using 16 criteria worth a total of 100 points. Based on their scores, the husband and the wife from each family received a certificate recognizing their efforts—the higher the score, the “better” the certificate. Participants also gave testimony to how their yard garden work had impacted their lives and the lives of their families. I shared a reflection on the parable of the sower (Matthew 13:1-9), reminding the participants that they were seeds sowed by the Holy Spirit with the expectation that they would produce in abundance, spreading the good news of yard gardening to their neighbors. Finally, in each celebration the leaders of the respective organizations gave their final words, sharing the larger vision of what the farmer organizations are all about—a fundamental transformation of all of Haitian society until the day that each and every person can live with dignity.

It was a grand two weeks. After that, Jenny had already given me my marching orders: I was to go to the Dominican Republic and help the Community Health Evangelism Committee of Batey 7 prepare for a health screening of at least 200 students from the local elementary school. And that was truly an adventure. But that’s a story for the next letter.