A letter from Jenny Bent serving in the Dominican Republic

Individuals: Give online to E200356 for Mark Hare and Jenny Bent’s sending and support

Six women from Westminster Presbyterian Church in Greenville, South Carolina, arrived in Barahona on Saturday, February 7, in the late evening. Mark, our two daughters, and I went to receive them. We took our friend, Juan Duval, the vice-president of the Community Development Committee of Batey 7, with us. (A batey is a former camp built for sugarcane workers brought from Haiti, now a small community of families.) He presented the objectives and the activities that the Committee had prepared for the group’s visit. The first goal that Juan shared with the group was to renew the roofs of two rooms in one of the “barrancons” of Batey 7. The second goal was to clean out some of the drainage ditches blocked with trash. The Westminster group had doubts about the safety of working on the roofs, as well as some other questions. Juan addressed the group’s concerns clearly and even with some wisdom.

The “barrancon” in Batey 7 where six women from Westminster Presbyterian (Greenville, SC) helped renew roofs for three families. A “barrancon” is a long building divided into many rooms; in this case, ten rooms in front and ten rooms behind. Originally the barrancons were for the sugarcane cutters in the 1960’s and 70’s. Now there are families living in these rooms; sometimes a family has one room, sometimes they have two.

Monday, February 9, after having provided constructive advice to the Committee in advance of the visit, Mark and I began the adventure with our partners and our visitors! I had selected passages from Nehemiah as part of our time for devotions with which we began each day. I picked Nehemiah because this Biblical story has some strong similarities with the life of Batey 7 and especially with the objectives the Committee wanted to accomplish during the week. After listening to the text and responding to the Word, 6 North Americans and about 15 Dominicans together, we prayed, and then we began working!

We formed four teams. The first began cleaning off trash from the roofs of the barrancon the Committee had selected to help with roof renovations. The second team went to purchase tin roofing and other materials. This team included one of the heads of families that would be receiving the assistance. The third group began cleaning out trash from one of the drainage canals. The fourth team began preparing lunch. After lunch all four teams came together to help assemble all of the trash and load it into my green Nissan.

At the end of the day the Committee members shared three causes for celebration. One was the quantity of trash that had been eliminated from the roofs of the barrancon. The Committee members pointed to the barrancon and said, “See! The Batey has a new look!” A second cause for celebration came from the group in charge of purchases. When they arrived at the hardware store they found that their funds were sufficient to purchase materials for the roofs of three families rather than just two. Juan observed, “We are the same as Nehemiah. This is a sign that God is with us.” A third cause for celebration was the work of the group cleaning drainage canals. The team members had pulled out enough trash to completely fill the back of my green Nissan pickup. The Committee explained that this work was particularly impressive because it demonstrated that the women from Westminster had truly come to support the committee and to be in solidarity with the people of Batey 7. 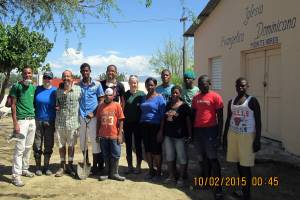 The group of volunteers, Dominicans and North Americans, after finishing the long day of work.

Tuesday morning, when Mark and I arrived at the Batey we found the three families selected to receive new roofs already working. They had already removed all of the old roofing and were replacing the boards underneath that had rotted. The asbestos roofing material they had removed was 40 years old, from when the barrancon had been built for the original sugarcane workers brought from Haiti. Mark and I were impressed with the energy and focus of the families! Tuesday we worked very hard, everyone side by side.

But on Wednesday when three of the visiting North American friends were ill, the Committee decided to discontinue the drainage cleaning and proposed visiting homes to raise awareness about the critical importance of clear drains as well as appropriate trash maintenance. We formed teams of one or two members from the Committee, a translator, and one or two of the Presbyterian women, and we went out into the community to spread the word. This unplanned activity ended up introducing the visitors to some of the realities that the community experiences daily.  The women were invited into the families’ homes; they had to step carefully around large near-permanent puddles and they saw the children as they heedlessly played near the edges of ditches filled with trash and stagnant water.

Thursday, all six women were back on their feet and Mark and I presented a workshop that helped the participants distinguish between projects that can bring real development to a community and those that merely provide relief, without resolving the underlying problems. A cross-cultural conversation ensued that helped all of us understand the issues better.

As a result of the Committee’s work, in four short days we had succeeded in cleaning out three long stretches of drainage canals, visited many homes, and helped three families put on new roofs. Using Biblical texts as our foundation, we had learned about and practiced integrated development—making changes that touched emotions and reached the soul even as they empowered people to believe in their own strength. 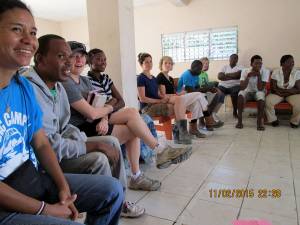 Participants from the three days of work together in the workshop on Development. The group included the six North Americans, members of the Community Development Committee and a solid group of local youth who had volunteered.

Our Presbyterian friends learned about the political, social, spiritual and economic realities of the people in the bateys. Likewise, our friends from Batey 7 learned to respect the visitors for the way they worked side by side with the Committee, for their willingness to eat in the Batey 7 homes, and even for the humility the women demonstrated when they discovered their physical limitations. Mark and I believe the two groups also learned new things about themselves, seeing themselves through the eyes of others.

In the final evaluation Thursday our friend Juan said it this way: “This had never happened before in our community. We have been transformed.”

We want to thank each one of you for the way that you continuously accompany Mark and the girls and me in our work—through your cards, your e-mails, your prayers and your financial support. Thank you for walking together with us in our journey.

To finish, I invite you to read Nehemiah and imagine for yourself that you are reading about Batey 7 with all of its uncertainties. Interpret, meditate and pray. Carry these people in your heart and you will come a little closer to what the mission in Batey 7 is about.

In the name of the All Powerful One,

P.S. If you are interested in the specific passages from Nehemiah and the follow-up questions that we used in our devotions, write us and let us know. We will send them immediately.