John is periodically in the United States, based in Black Mountain NC, and available to speak to congregations as his schedule permits. Email him to extend an invitation to visit your congregation or organization.

John McCall has been serving in Taiwan for over 20 years. He spends a lot of time on trains, buses, and subways as he travels throughout Taiwan teaching courses on ministry and spiritual formation at the seminaries of the Presbyterian Church of Taiwan. John leads groups of pastors in different parts of Taiwan that meet monthly to find encouragement and challenge. “I have the privilege of accompanying both seminary students and pastors as they seek to be Christ’s light and salt in this land,” he says. Most every weekend, John is in a different church or presbytery teaching and preaching and equipping the leadership of the Taiwanese church. Many of these churches are indigenous, located in the high mountains, on the coast, or in Taiwan’s teeming cities.

Taiwan, the size of Maryland and Delaware combined, has a population just a little smaller than Australia. It is located south of Japan, north of the Philippines, and just 100 miles from the south coast of China. The Portuguese called Taiwan “Formosa,” which means “beautiful island.” From its rugged coasts to its high mountains to its bustling cities, Taiwan truly is beautiful. It is a high-tech country with many folks involved in the computer and smart-phone industry.

Taiwan has a number of different people groups, with at least 16 indigenous groups. Scholars believe that some of these groups may have been on Taiwan for at least 10,000 years. There are also immigrants who arrived from southern China over 400 years ago, Hakka people who also emigrated from China, and those who came over with Chiang Kai-Shek in 1949. In addition, many folks from southeast Asia have come to Taiwan for work. The diversity of people groups, languages, and cultures makes Taiwan a dynamic multicultural country.

John McCall’s experience demonstrates that the mission legacy of Presbyterians casts a light that crosses time and cultures.

“I served as pastor of the Black Mountain (North Carolina) Presbyterian Church next to Montreat Conference Center, and we had about 40 retired mission co-workers in the congregation,” John says. “They had an amazing ability to cross cultural boundaries.”

Their adeptness at building relationships across cultures was evident when the Black Mountain congregation worshipped and worked alongside ethnic churches, John says. Their commitment to service showed when volunteers were needed to tutor at the local elementary school or fill some other community need.

“I learned a great deal from them, and God used them to cause me to ponder international mission service,” John says.

John sensed that God had called him to follow in the mission tradition that had been modeled for him so powerfully. In 1996, he accepted an appointment to serve in Taiwan.

“I have fallen in love with Taiwan and its people,” John says. “There are different people groups that bring such rich gifts to Taiwanese society. Their hospitality and welcome of people from afar is amazing.”

John has spent a considerable portion of his time in Taiwan working with the island’s aboriginal people, who are believed to be of Malayo-Polynesian origin. They make up less than 2 percent of Taiwan’s population, but about 70 percent of the aborigines are Christians. They are the most marginalized group in Taiwan and have limited employment and educational opportunities.

John worked for 13 years in Taiwan before returning to the United States in 2009 and serving for two years as pastor of Westminster Presbyterian Church in Greensboro, North Carolina. A “renewed call to serve again” in Asia led him back to Taiwan, John says. “God has given me a missionary’s heart, and it is such a privilege to learn from and serve with folks in partnership in a cross-cultural setting.”

John’s philosophy of mission stems in part from a theology of incarnation that he draws from John’s Gospel. “I love the way Eugene Peterson translates John 1:14: ‘The Word became flesh and moved into the neighborhood,’” John says. “As Christians and mission co-workers, we are called to move into the neighborhood to live with and love the folks to whom we have been called. It’s a privilege and a wonderful opportunity. We are shaped by them and their faith.”

In a sense, John’s return to Taiwan was a return to the neighborhood. “I grew up in the United States, but I feel just as comfortable in an aboriginal village on a mountainside overlooking the Pacific Ocean, sharing with Christian friends around an open fire.”

Watch a video of John McCall 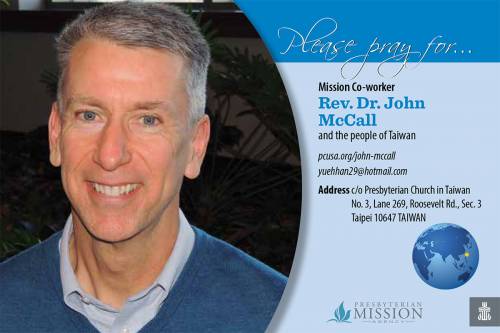 Use this card as you pray for mission co-worker John McCall. This card includes a photo and overview of his work. John supports pastors of…

Give in honor of the ministry of John McCall