Share God’s love with our neighbors-in-need around the world through One Great Hour of Sharing.
Make A Donation Click Here >
Home › What We Do › Where We Work › Co-workers › Fields Being Transformed

Individuals: Give onlineto E200487 for John McCall’s sending and support

It has been a tremendous week in China.  I taught the first week of a course on Spiritual Theology at Jiangsu Seminary with about 90 students.  This year’s class is quite different from last year’s class since half of the students are regular seminary students and half are at the seminary from a rural area of the northern part of Jiangsu province. The first four days they sat on opposite sides of the large classroom.  On one side were the mostly younger seminary students in brighter, more fashionable clothes, several using their cell phones for their Bibles.  The rural evangelists, dressed mostly in black or brown coats with faces lined with stories from rural life, sat on the other side. 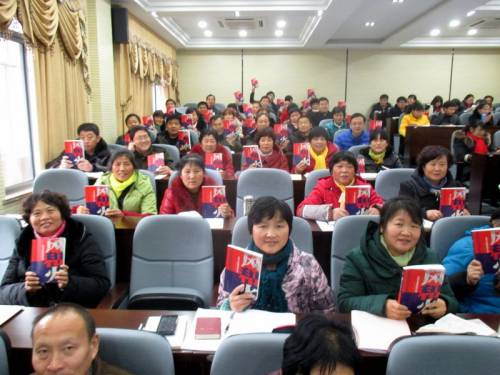 On Thursday I talked about how Christ tears down the dividing walls between Jews and Gentiles, males and females, slaves and free.  One of the elders from the rural area stood and said that that day all the students should find someone they don’t know well and eat with him in the dining hall.  Then he suggested that on Friday they should mix up their seats so that the seminary students and the church workers from the rural area would sit together.  I was thrilled by this idea and on Friday it was fun to begin class seeing them all mixed together.

Traditional Chinese education does not necessarily encourage questions, but I prefer the students to ask questions so that I can gauge whether or not I am speaking to them.  The second day several of the students hiked with me up the small mountain behind the seminary during our lunch break and all the way up the mountain the questions poured out.  It was the best kind of education, sharing together along the path.

I gave them an assignment to go to a popular area in Nanjing City and ponder several questions:  (1) What does the society want us to see and hear? (2) What does God want us to see and hear? (3) Which messages are true and which are false? (4) If Christ came to Nanjing where would he go? (5) Where do you see God’s Kingdom?  On Friday half of the students gave their oral reports and it was fun to see them open their eyes and hearts to see their own city in a new way. 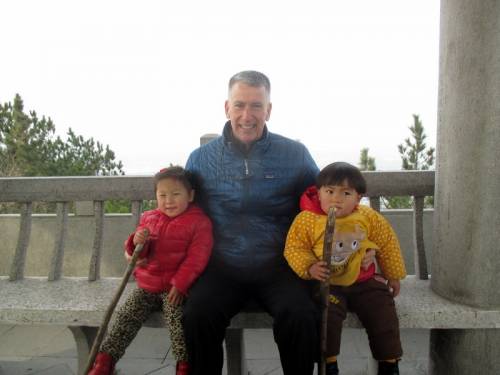 With one of the student’s twins

Friday afternoon I met a friend and colleague at the Nanjing High Speed Rail Station and we took a two-hour train ride to a city where Duke University has opened a campus.  Saturday we visited five different churches (two of which are still being built). China is developing amazingly fast and farm fields are becoming apartment blocks.  The church in this area has been very strategic in finding land to build churches in these former farming communities that are becoming part of expanding cities.  I was deeply impressed by the ingenuity and creativity of the lead pastor in this area, who works with government officials and the different congregations to get these churches built.

One church is being built in what they call a “water village.”  The village has many canals and the new church is built in the shape of a boat.  The pastor is a young woman who will be preaching in a new sanctuary that holds 1,000 worshipers at each service.

This morning I preached at a city church and as usual when I preach here, I walked into a packed sanctuary.  The faces of the worshipers were joy-filled and expectant, hungry to hear God’s Word.  It is a joy and a privilege for me to preach here. They sing with full voices and say the Lord’s Prayer with gusto.

As this land develops and changes literally each day, there is a hunger that only Christ can fill.  The name brand stores shine in the gray air, but there are not smiles on the faces of the shoppers with their LV and Cartier bags.  This morning, however, in that packed church with no heat, I saw joy and faith.

Pray for this land and the churches here as they bring living water to millions of people.