Share God’s love with our neighbors-in-need around the world through One Great Hour of Sharing.
Make A Donation Click Here >
Home › What We Do › Where We Work › Co-workers › The Kingdom of Heaven and an Angel’s Voice

A letter from John McCall, serving in Taiwan

Occasionally in life, we are able to experience a slice of heaven here on earth. This past week, I saw God’s Kingdom in technicolor.

For the seventh time, we took a group of 28 Taiwanese male and female university students, seminary students, and young pastors to a Christian community called Taize in the rolling hills of rural France. Many of you know Taize from singing Taize prayer songs. But Taize is so much more than a style of singing.

Last week, there were 2,300 young people from all over the world who came to Taize by bus, by train, and by bicycle. As we waited to join the orientation on that first Sunday, we met a large group of Indonesian youth who had traveled farther than us to get to Taize. Our group sang a song to them in Mandarin that says, “In Jesus Christ we are one family.” The Indonesians then borrowed a guitar from one of our students and sang the same song in Indonesian. During the week, we enjoyed learning some Indonesian from our new friends and also heard from them something of what it is to be Christian in that largely Muslim land. 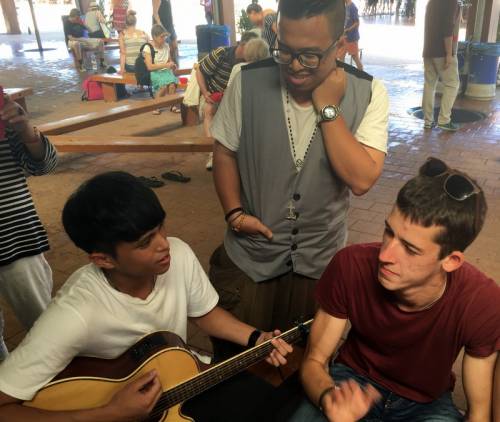 That first night, I also met a very tall young man from Lithuania who plays on the national basketball team for his country. He told me that he loves music. I mentioned to him that we have a young Taiwanese man whose voice sounds like an angel. That night, Dom, the Lithuanian, appeared at the door of our dorm and asked me if “Angel Voice” had come back yet. I told him that he hadn’t, but that he could wait for him and I would introduce them. “Angel Voice” (Lo-shing) came back and found Dom waiting for him. Since Lo-shing has very little English, they used music to communicate and became fast friends. Every day they found time to sing together. Their common language was D-minor and A-7 and warm smiles.

Why do so many young people flock to Taize? Most of these youth are European, and the youth in their home countries are most often not in church. But the founder of Taize had a vision for youth (Taize is an ecumenical community made up of Protestant, Catholic, and Eastern Orthodox brothers from all over the world who live in community), and the current brothers welcome all, especially youth and young adults. They come with tattoos and many smoke, but they are not judged. We pray together three times a day and they hear God’s Word read. They join Bible studies where their questions are encouraged. The community stresses that we can fully trust God and, in that trust, can create communities of trust on earth.

There is only one place at Taize where these youth can access the internet, so you don’t see anyone staring at their cell phone. These young people look into the eyes of one another and discover that they are free to love and trust. Everyone is given a job for the week: cleaning toilets, washing pots, serving meals. And you don’t hear complaining, but you see the world coming together for a common task. 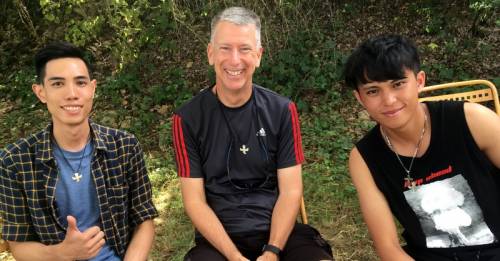 The life at Taize is intentionally simple. We stay in simple dorms or tents. Our meals are not French gourmet, but rice or noodles with an apple. Each evening after dinner with our Taiwanese youth, we broke into two groups and asked them to share in Mandarin what special experience they had that day. And every evening our youth would invite youth from other countries to join our Mandarin group. Those Taiwanese with good English would translate for them. One young Korean loved to join our group. The last night, he said that the highlight of his time at Taize was our Taiwanese group.

In a divided world, it is stunning to see the nations living together in trust and love. These young people are so open. We always bring note cards and a Taiwanese brush pen. And the European youth line up to get a Mandarin name. We choose names related to the Christian faith, so it becomes a way of sharing our faith with these youth, many who come from post-Christian lands. One of our seminary students has beautiful calligraphy and never tired of writing hundreds of names for his European friends. 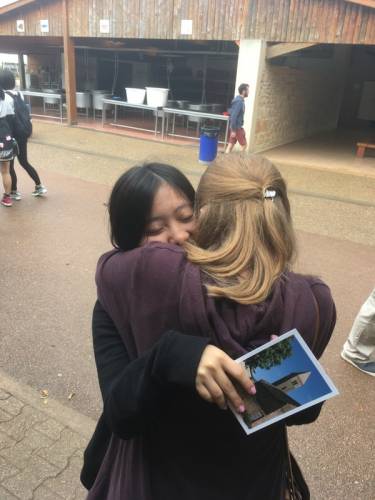 There is a deep joy at Taize that the “thumbs up” symbol on Facebook cannot give. So many of these youth have not tasted true love until they come to this hill in the middle of France and see the gospel being lived out. There isn’t a lot of telling; there is a lot of living out love and trust in daily life.

The last night, Dom, the Lithuanian young man, showed up at our door. He said he had a gift for “Angel Voice.” He had bought a medallion for Lo-shing to wear that said “Friend” in Mandarin. I could tell that Lo-shing was extremely moved. Lo-shing then took the cross he had worn around his neck for years and put it around Dom’s neck.

The Kingdom of God was right there.

Thank you for your prayers and support that allow me to help my Taiwanese friends to be a blessing to the world and also to be blessed.