One of my main missions here is to help equip and nurture both future leaders and current leaders for the church in Asia. I spend a good amount of time teaching seminary students and mentoring pastors. But over many years of living in Taiwan, I have also met many Christians who are not planning to be pastors but who are living out their faith in attractive ways in this non-Christian land.

I’ve known Libunu, a member of the Lucai aboriginal tribe, for 20 years. He and his wife are two of my best friends here. He is currently serving as principal of Ren Ai Elementary School in New Taipei City. This school has 2,000 students and 160 teachers. Education is vital in this land. Most parents stress that education is the key to their child’s success. So children and youth spend a lot of time in regular school and also in after-school supplemental courses. Most teachers teach for the tests, which are crucial for getting into good schools at each level. Students take a test to get into middle school and also to get into high school. Most of high school is spent getting ready for the college entrance exam. 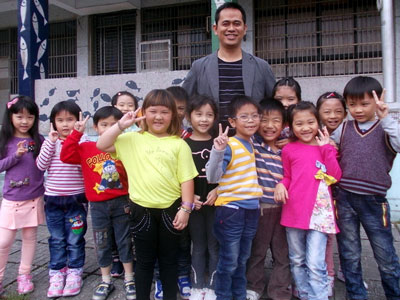 But Libunu is a different kind of principal. He views each student at his school from the perspective of his faith. He not only pays attention to grades, but also to building character. Many students come from single-family homes and deal with issues of self-esteem. So Libunu encourages his teachers to respond to each student’s special situation. When a troubled student is brought to his office because of disciplinary problems, Libunu first listens to the student to try to understand the student’s life situation. It is wonderful to see how Libunu’s love for God and love for neighbor are at the forefront of his daily job. He will continue as principal but will also enter a Ph.D. program in aboriginal studies this fall. He wants to help other aboriginals become a blessing to Taiwan society.

Taiwan Seminary, where I live, is located on a mountain overlooking Taipei City. The one road up this mountain often has traffic backed up, because of both a large university and other schools located on the mountain and the many city folks who enjoy hiking or drinking tea in the National Park at the top of the mountain. Every year at Lunar New Year the police officers, who have their police station at the bottom of the mountain, have to do traffic control instead of returning home to be with their families for the Lunar New Year banquet. For many years at the start of the New Year I have taken tea and other snacks to these police officers to thank them for their hard work. There is a word in Mandarin, shing-koo, which means “I acknowledge your difficulty.” So every year I say to these police officers, “shing-koo.” Two years ago when I went to the police station, the new young chief of that station told me that he was also a Presbyterian Christian. He is a hard-working police officer in his young 30s who spends three nights a week getting his master’s degree in Criminal Justice. 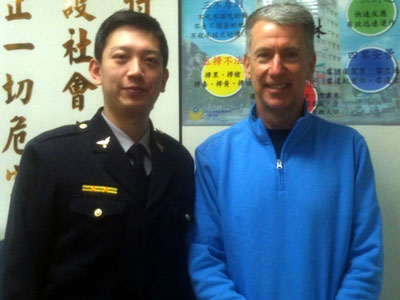 Police Chief Chen has come by my home on several occasions. He often asks questions about prayer or the Bible. It is not easy to be a police officer, and I encourage him when not working on Sundays to find a local church in which to worship. One day I was talking with him out in front of his police station when the neighboring house suddenly caught on fire. I was impressed with his leadership as he told each officer to respond in different ways to the fire. By the time the fire truck arrived, most of the fire was out. Chief Chen called me last week to tell me that he had been re-assigned to be chief of another police station in another part of Taipei. I will miss seeing him on our mountain road but know his faith will be the compass directing him in his daily work.

Eleven years ago I was watching a minor league baseball game in Asheville, North Carolina. I learned that one of the pitchers for the Asheville Tourists was from Taiwan. I got to know him and discovered that he is also a Presbyterian. He is a great guy with a deep faith. He left Taiwan at 16, drafted by the Colorado Rockies. He had hoped to pitch in the major leagues, but got only to the highest of the minor leagues. He was injured and came back to Taiwan. 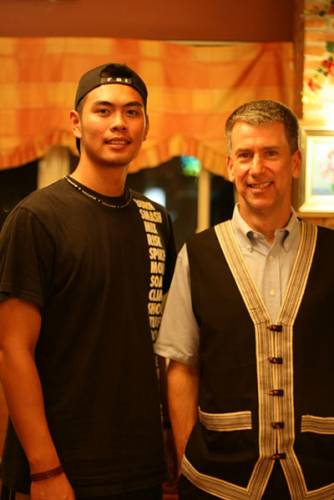 Shao-long is now pitching for the Taiwanese major league team in his hometown of Tainan. This week he just became a father. After teaching at the seminary in Tainan I had dinner with Shao-long and then went to the birthing center where most mothers spend a month with their babies before returning home. I was able to meet his young son and congratulate his wife.

I have asked Shao-long over the years to speak at youth events where I was also speaking to share his faith with Taiwanese young people. People often comment on my height in this land, but when I am with Shao-long, who is much taller than I am, no one comments on my height— they only look up to him. He knows several other Christian baseball players in Taiwan, and they seek to mutually encourage each other. He is soft-spoken but shares his faith in a beautiful and honest way. God is using him to be Christ’s salt and light in this land.

It is a joy to see these three men, and so many other women and men like them, who are living out their Christian faith in powerful ways all over Taiwan. Many Taiwanese feel great pressure from their jobs and the challenges of the economy. A recent newspaper article said that 70 percent of Taiwanese are stressed and have trouble sleeping. As Christians here live lives of peace in Christ, they are a breath of fresh air to their neighbors.

Please pray for the church here. May God give the Christians joy and peace as they bless their families, co-workers, classmates, and neighbors. Thank you for your support, which allows me to encourage folks like Libunu, Chief Chen, and Shao-long to be Christ’s light.