Individuals:  Give online to E200487 for John
McCall’s sending and support

How do we learn to follow Christ in our daily lives? I have learned how to follow from many others who are far along on their journey of faith. One of my most important teachers is Elder Samuel Jang. He is 93 years old and yesterday I had the opportunity to visit him along with his daughter, son-in-law, and another good friend.

I met Elder Jang 20 years ago during an English Bible study at East Gate Presbyterian Church in Taipei. He was the elder in charge of the Bible study, and he asked me to be the leader. I had just arrived in Taiwan and was learning both Mandarin and the culture. 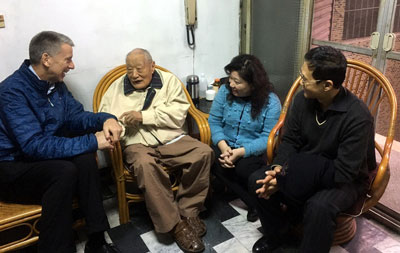 Elder Jang has an infectious joy. He is a dentist and continued to see patients into his late 80s as a way to share his faith. Every week new folks would show up at our Bible study. I would ask them how they learned about the Bible study. Most would reply, “Elder Jang is my dentist.” I had an image of the dentist’s drill just about to enter the patient’s mouth, and Elder Jang saying, “How would you like to come to a Bible study?” Actually, I know his patients saw his irresistible joy, and that is what attracted them to know the One who gave Elder Jang such joy.

In addition to being in charge of the English Bible study, Elder Jang was also the head of the church’s children’s Sunday School. He would teach a class of children himself. Whenever another teacher had a problem student, Elder Jang would gladly invite the student to his class. He told the challenging student that he or she had been appointed as the assistant class leader. This student was given the responsibility to distribute Bibles to the other students, lead the singing, and even lead the class prayer. These students became so busy serving that they had no time to be difficult. Because of Elder Jang’s influence many of his former Sunday School students later became the elders and deacons of East Gate Church. He loved these students into God’s Kingdom. 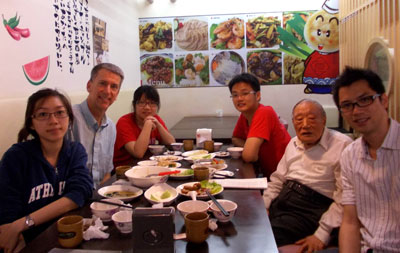 Sharing Dinner Together with Elder Jang

Elder Jang has been a wonderful husband and father. He told me once that his wife used the family credit card and got the family into serious debt. So Elder Jang asked his wife and four children to talk together. He told his children that their family had run into some financial challenges and that they would have to tighten the family budget for the next year. He never mentioned why they were having financial challenges. All of his children and grandchildren are active in their churches. One of his daughters is now an elder at East Gate Church. Whenever one of my students at the seminary was preparing to be married, I would ask them to have dinner with Elder Jang. He would share how he sought to be a loving witness in his family.

Elder Jang no longer sees patients and is homebound. But his infectious joy is still strong. Yesterday as we sat in his home he told stories of his Christian journey. And I was grateful to have another opportunity to learn from him how to follow Jesus Christ. He has another Filipina aide who is now helping him. As we prayed for her, she told me, “I love Elder Jang as my own father.”

Elder Jang, like all of us, has had his challenges in life. And yet he faces each challenge as an opportunity to rely on God and to witness to God’s love. No matter who he meets, folks are blessed by his presence. Once I asked him to come and speak to a group of 75 of my students. At first I could see them wondering why I asked him to speak to them. But as he shared his faith they leaned forward in their seats, captivated by this man of joy.

Mission is always two-way. And I am grateful that Elder Jang’s path has crossed my path. Thank you for your prayers and support, which allow me to be blessed by Elder Jang and also to allow him to bless those with whom I serve.