I boarded the train last Tuesday evening after buying my usual Tuesday dinner:  wonderful Taiwan dumplings, mixed vegetables topped with onions, and a juicy, easy-to-peel tangerine.  As I settled in my seat for the two-hour train ride back to Taipei, after teaching at the aboriginal seminary on the east coast, a man sat down next to me.  He was well dressed.

As we started to talk, I learned that he works for a German investment company and was speaking at a bank in the city where I teach.  He was on his way home.  Like many Taiwanese whom I meet on “the way,” he was very open about his life.  He is married with a young son.  His parents also depend upon him to help with their retirement.  So he is somewhat squeezed between supporting his wife and child and supporting his parents.  He is 35 and works long days and is always available to his clients.  He shared that the stress in his life is great.  His salary has not changed since he graduated from college 11 years ago.  Like so many in his generation, he cannot afford to buy an apartment in Taipei because of the great cost of real estate. 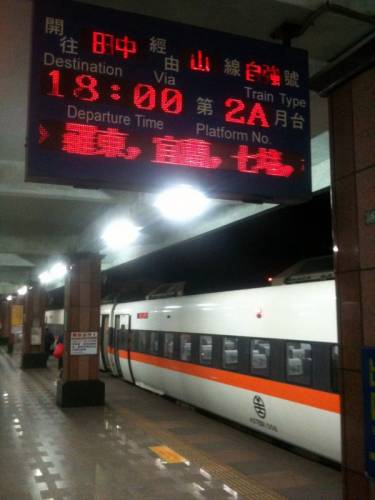 The Six O’Clock Train to Taipei

I asked him how he handles life’s pressures.  He reached into his suit pocket and pulled out a pack of cigarettes.  He said, “This is how I handle pressure.  I used to drink also, but have given that up and know that I should also give up smoking.”  He also plays basketball with his high school classmates each Sunday.

As we talked I shared my faith and the fact that Christ helps us deal with both the challenges and joys of life.  He asked me the typical questions about the difference between Protestants and Catholics.  Like so many non-Christian Taiwanese, he was amazingly familiar with the importance of baptism.  He told me that one of his classmates married a Presbyterian Christian and that his classmate is now a Christian.  He said, “It’s interesting that when non-Christians marry Christians, they usually become Christians too.  But I’ve rarely seen a Christian who marries a non-Christian begin worshiping the folk gods at the temple.  I asked him if he was a worshiper of the traditional Taiwanese folk gods, and he told me that his parents are very energetic in their worship at the home altar, but that he was not as devoted.  He represents many in this land who are not energetically following their parents and grandparents in worshiping the traditional folk gods.  But that does not mean they are not spiritual.  Most Taiwanese are very open to the spiritual world.  For them, this world is as real as the world they can see.  So talking about spiritual things to folks on a train is not seen as necessarily strange. 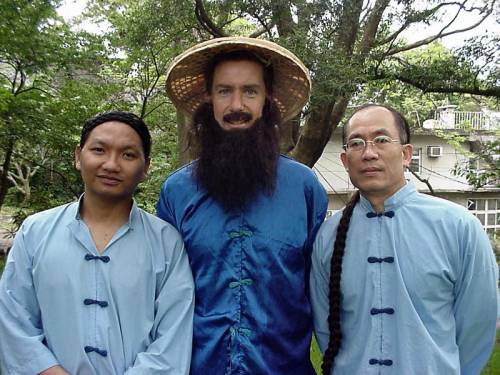 John as George McKay with students

Then this man made a comment that really surprised me.  He said, “I’m really impressed by the lives of the early Christian missionaries to Taiwan.”  He especially mentioned George McKay, a Canadian who was the first Protestant missionary to the north of Taiwan in the late 1800s.  “He really loved Taiwan and its people,” the man next to me reflected.  Here was a 21st-century Taiwanese non-Christian talking about a Presbyterian missionary who came to Taiwan 150 years ago.  “His life is an inspiration,” he said.

I then reflected with him on George McKay’s motivation in coming and living in Taiwan.  I also talked about every Christian’s motivation to share the love of God with our neighbors.  I said, “That’s why we’ve been put on this earth.”  He nodded his head.  I then said, “When the time comes when you cannot handle life’s challenges on your own, Christ is always ready to help.”  He nodded again and said, “I may have to wait until my folks are no longer alive.”  This is a common response from non-Christian Taiwanese.  Their parents worry that if their child, especially the eldest son, is baptized and decides to follow Christ, no one will make offerings of food and other things that these parents believe they will need in the next life.  These parents are deathly afraid of becoming hungry ghosts for eternity if their children don’t make these offerings.  So many of these children will wait to be baptized until after their parents are gone.

As the train pulled into Taipei Station and we headed in different directions, I reflected on our conversation.   It seemed like a parable for our time.  Throughout Taiwan’s cities there are young men and women just like him who are trying to get ahead and care for their families.  But they know there must be more in life.  They see folks like George McKay who give their lives in Christ’s name for the sake of the world, and something about a life like that resonates within them. 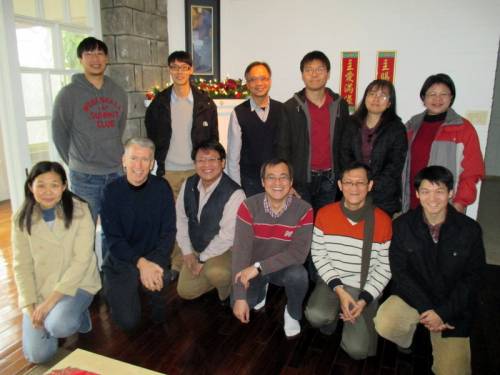 [A quick aside:  Several years ago the Presbyterian Church of Taiwan filmed George McKay’s life and since I was the closest tall North American, I was drafted to play McKay.  When McKay first came to Taiwan, he was misunderstood and faced some serious opposition.  He had stones thrown at him.  In the film one of my seminary students at the time played the one who threw the stones at McKay.  The first time that he picked up a rather large stone and threw it at me, it hit me just below my ribs.  But the man videotaping the film was not quick enough and asked to re-do that scene.  The second time the stone hit me in the same place, but the videographer again was not quick enough, and we had to do the scene a third time.  He finally got it right, but that night when I got home I had a big bruise.  It just happened that a week later George McKay’s granddaughter, who at that time was in her late 80s, came to Taiwan from Canada. I met her at a gathering and told her that I had it tougher than her grandfather.  She asked me why, and I told her that he was hit only once by a stone, and I was hit three times.  The rest of the evening, she called me A-gong, the Taiwanese name for grandfather.]

This morning I hosted a monthly group of 12 Taipei pastors at my home.  I meet with three of these groups each month in order to help them find a safe space to share the joys and challenges of their lives and ministries.  They are becoming spiritual friends.  Part of my hope is that they will begin to dream God’s dream for their lives, for their churches, and for this land of Taiwan.  I shared this parable on the train with them and encouraged them to think about how to reach out to folks like this investment broker.  The field is great and the laborers are few.

Please pray for the pastors and Christians of Taiwan and Asia as they seek to share the life-giving love of Christ with a thirsty world.  Thank you for your love and support which allows me to walk beside them as a mentor and encourager.