A Letter from John McCall, serving in Taiwan

Most weekends I travel all over Taiwan to preach and speak in different churches. My mode of transportation often includes buses, subways, trains, the highspeed rail, and automobiles. I have preached in about 700-800 Taiwanese churches over the past 23 years.

Recently I traveled to southern Taiwan to Ma-doe, a rural community known for its pomelos. The pomelo is something like a grapefruit and is always eaten during the Autumn Moon Festival. The church in Ma-doe has been in existence for over 100 years and sits right across the street from a folk temple. The clergy couple, who have served this church for sixteen years, are both former students of mine. They have three children and have become rooted in that community.

I took the highspeed rail south on a Saturday afternoon, and the church secretary, a young man who is a first-generation Christian, and the woman pastor picked me up at the station. On the forty-minute ride to the church, the secretary, whom I have met several times, explained that I would be staying at his home. He lives with his family, who has a three-story home in the middle of Ma-doe. His room is on the second floor, next to the rooms of both of his brothers and their families. 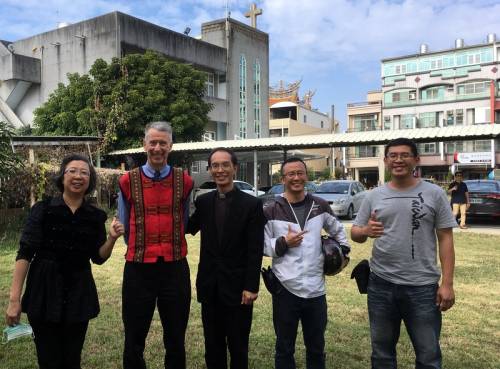 With the two pastors of Ma Doe Church, Dong Hsien, and another new Christian.

He told me that he was thrilled that I could stay at his home. I am sure that being the only Christian in his family is not easy. Often new Christians are ostracized by their non-Christian family members for not worshiping the folk gods. His family accepts his new faith, but so far, they are not interested in Christianity.

When we arrived at the church, I met a young man who I sensed wanted to talk. We sat outside next to a pomelo grove, and I listened to his beautiful story. He, too, is a first-generation Christian. He grew up in a difficult home with a mother who suffered from mental illness and a father who really didn’t know how to raise his children when his wife was emotionally absent. This young man said that he did not know what it meant to be loved. But in his twenties, someone invited him to the Ma-doe Church, and he said, for the first time, he began to understand what it is to be loved by God and by God’s family. He works construction, and we talked about the opportunity God has given him to share God’s love with the other workers on the construction site. First-generation Christians here are wonderful at sharing their new-found faith with others.

The pastors had invited neighboring churches to the evening Renewal Service, including one church that ministers to former drug users. The church was full on a Saturday evening, including two pews of these young men who used to be addicted to drugs.

I always ask the pastor where I am preaching how long I should preach, and the times vary radically. The shortest sermons here are twenty minutes, and often at a Renewal Service, they ask me to preach for an hour. So, I always prepare longer sermons and then quickly cut out sections if their preacher does not ordinarily preach as long.

After the service, they had asked me to have a book signing of one of my books on prayer, so people lined up, and it gave me an opportunity to speak to many who had attended the service. 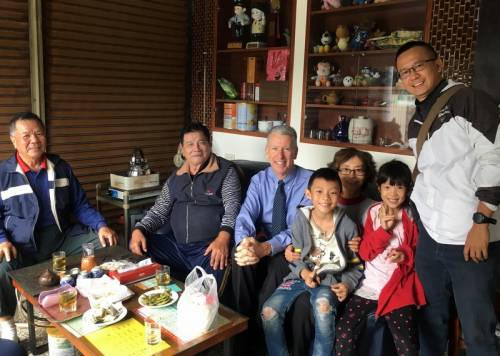 Drinking Tea with Dong Hsien and his family before worship on Sunday morning.

As the book signing was wrapping up, another man came and sat down beside me. He told me that he had been baptized several months ago, but he was facing a challenge. The Apostle Paul says that when we begin to follow Jesus, we become “new creatures in Christ.” This young man said, “I am finding that becoming a new creature in Christ is not easy.” In many years of ministry, few people have asked me such an important question.

That evening as I stayed in Dong Hsien’s home and was welcomed warmly by his family, I gave thanks for all these new Christians at the Ma-doe Church. It felt a little bit like the New Testament Church, where there was energy and hunger to learn to live in a new way and to share that new life with others.

The next morning, as we prepared to leave to go back to the church for the Sunday service, I thanked Dong Hisen’s father and mother for hosting me. Then I said, “Your son is a very kind person.” And his father responded by saying, “I guess that is because he is a Christian.”

In the car on the way to the church, I told Dong Hsien what his father had said. His face lit up. “Really? My father said that?” he asked.

God is working at Ma-Doe Church, around this land of Taiwan, and throughout the world.

Thank you for your concern and support of God’s work. May God continue to bring new life to our weary world.