Share God’s love with our neighbors-in-need around the world through One Great Hour of Sharing.
Make A Donation Click Here >
Home › What We Do › Where We Work › Co-workers › Typhoon Time

I had been asked to be the speaker at a conference for aboriginal youth that was to begin last Thursday.  Earlier in the week they said on the news that a tropical storm had formed in the Pacific southeast of Taiwan.  They weren’t predicting that it would amount to anything, so I didn’t give it too much thought.   But the day before I was to leave for the east coast, they were predicting that it might seriously intensify and was headed to Taiwan.   After weathering through so many typhoons over the years, I know that typhoons have a mind of their own and things change dramatically.  I called the pastor in charge of the conference, to ask her what she thought (I was secretly hoping they would reschedule the conference).   She replied, “We’re going ahead. Just pray!”

So, Thursday morning I took an early train along the Pacific.  The seas were calm and although there was wind, it wasn’t typhoon weather.  Three hours later, when I got off at the station, I looked for the aboriginal young adults who were supposed to pick me up.  After a while, the pastor called me and said the two young men couldn’t find me and I found that they were waiting for me at the next station.   So I waited another twenty minutes while they drove to the station where I was waiting.  They weren’t at all bothered by my mistake of getting off at the wrong station and said that the names of the two stations sound alike. 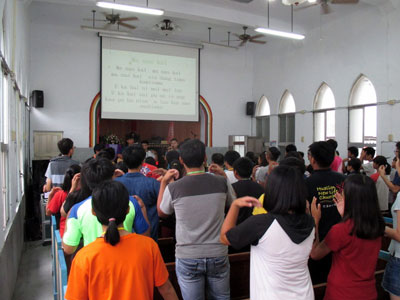 When we got to the conference site it was beginning to rain and dark clouds were building on the horizon.  A youth praise band led us in joyful singing, and the pastor came and sat next to me and told me that for safety reasons the local government had told them to end the conference after my first talk.  This particular tribe of aboriginals is very community-oriented and especially kind.  As I began to talk I could see through the windows that the sky was turning dark.  The youth didn’t seem to notice, so I kept my focus on them and not on the sky.  At the end of my talk I taught them a song with lots of moving, and they were having a great time.

After the singing and a prayer for safety, the pastor told me that I would be staying in her village, which was about a 40-minute drive south of where we were meeting.  The wind and rain were beginning to pick up.  Now they were calling for a super typhoon, which would come ashore right where we were in Taidong.  I knew that the biggest danger in these typhoons is landslides, so I hoped the village in which we would be staying would not be next to a mountain.  As we turned off the road the pastor told me that her village was right ahead.  I could see that it was right next to a mountain with two bare spots that were prior landslides.  There was also a waterfall cascading down the mountain.  I thought to myself, “Probably not the best place to be in a super typhoon.”  She told me that I would be staying in the home of a church elder who is a farmer.  When she dropped me off, I noticed that the roof was corrugated metal.  Some international youth who were part of the conference stayed with me at the farmer’s house.

After a dinner of fish and fresh vegetables, the pastor had arranged for me to preach at a service at the village church.  Ordinarily they don’t have services on Thursday evening, but she said, “Since the Lord brought you to our village, could you bring a Word from the Lord?”  So, with the winds and rain blowing outside, we sang and prayed and I preached. 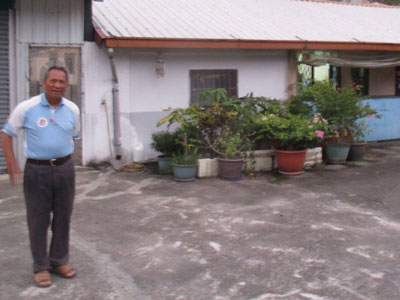 We returned to the farmer’s home around 9:30 PM.  The news said that the winds were building and that this kind of winds could blow the roofs off houses and implode the walls.  We lay down waiting for what was to come.  There was a Japanese young adult staying with us.  When I asked him what he was thinking, he replied, “A very interesting experience!”

Around 4 AM the winds were as strong as any I have ever experienced.  As the typhoon passed over the metal roof and the windows shook as if they would break, for about six hours it felt like a jumbo jet was just above us.  I prayed that God would be our shelter in the storm.  Then I remembered the story of a missionary to Korea who during the Korean War, while North Korean and South Korean soldiers fought just outside of the house where he was staying, remembered Psalm 121:4, which says, “The Lord who keeps Israel will neither slumber nor sleep.”  So he prayed and said, “Lord, there is no need for both us to stay awake.” So I used his prayer and finally, with the fierce wind as background noise, was able to fall asleep.

Thankfully, around 11 AM on Friday the winds slowed down a bit and in the light of a new day, we were able to see that there was not much damage in the village.  The roofs held, and so did the mountain above us.

But then I remembered that I had to get back to Taipei to preach at a series of services on Saturday and Sunday.  The effect in Taipei was just some wind and rain, so they were fine.  But the trains were not running.  The rivers were running high. When we called the local station to ask when the trains would begin running, the answer was, “We don’t know.”

Even though I have lived in Taiwan for almost 20 years, I was reminded that our cultures affect how we respond to that which we cannot control.  The aboriginals live on the margins of society and often have little control over their lives.  So they tend to trust God and wait.  But those of us from the centers of power, who are used to being in control, are used to controlling our environment and orchestrating our futures.  I knew as soon as I got off that train in that small town last Thursday at noon that I was not in control of much.   As we drove into that vulnerable village to stay with those vulnerable people, I knew that I would have a lot to learn from them. 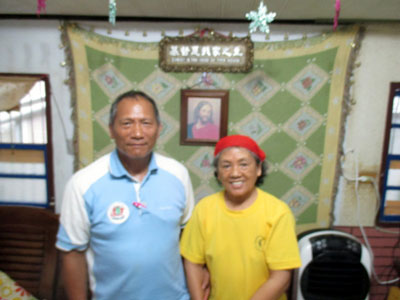 Elder and Mrs. Bavan in their living room

Instead of staying glued to the TV news, they decided to worship.  When the winds began to blow, they went to bed.  The next day they got up and gave thanks.  They live in the moment with a grateful heart and a deep trust that God is with them.

Friday afternoon I took a walk with some of the youth on the roads above the village.  The waterfall was raging and was beautiful.  The rice fields were full of abundant water.  The birds had somehow found places to hide during the storm and now were hungry and looking for a meal.

I returned to the farmer’s house after the walk, and the pastor knocked on the door of the room in which I was staying.  “Hurry,” she said.  ‘There are no trains from Taidong, but we will drive to Hualien, where they will have three trains tonight.”  So we piled into her old car with a seminary student driving and headed off into the driving rain.  Just as we were leaving the village, the car started to sputter and the battery light came on.  I thought, “OK, Lord, one more lesson.”  The pastor told me that her car was old.  But suddenly the battery was revived and we headed on our way.  As we crossed several rivers, the water was almost cresting the bridges.  But the little car kept going.

After about three hours we arrived in the city where I was to catch the train.  But my hosts wanted to take me to dinner.  They have a favorite night market in this city, and they wanted me to taste the local delicacies.  My thoughts were on getting a seat on the train, but by this time I had learned to wait and enjoy the moment.  We ate under dripping tarps and savored the specialties of this night market.  There weren’t many other customers, so the vendors were glad to have us there.   The pastor told the seminary student that it was time to go.  We got to the station in time for me to make the train.

As I found a seat and settled in, my whole body relaxed, and I said a prayer of thanks, for safety through the storm, for the welcome of friends in Christ, and for a train that would take me home.  I also prayed for my friends who were driving that same wet road back for three hours in the dark to return to their village.

When I got back to Taipei at midnight I learned that it was the biggest typhoon Taiwan has had in 60 years.  Two folks were killed, washed away by the sea.  Considering the magnitude of the storm, the damage could have been much worse.

We tend to think of time related to tasks.  We have to get back to do one more thing.  But Taiwanese aboriginals see time more as relationship.  The time we have is to strengthen our relationships both with God and with others.  The joy is in the journey.