Share God’s love with our neighbors-in-need around the world through One Great Hour of Sharing.
Make A Donation Click Here >
Home › What We Do › Where We Work › Co-workers › A Quiet Easter Story

Individuals:  Give onlineto E200487 for John McCall’s sending and support

The Sign Language Church asked me last year if I would preach at their Easter service. Their pastor is a former student of mine. His wife and son can both hear, but they communicate as a family with sign language. I had spoken at one of their church retreats many years ago, but had not been with this congregation since.

On that first Easter Jesus rose in silence. No one witnessed the most important event in the history of the world. And so this morning all the hymns and prayers and scripture were communicated in Mandarin sign language. Each country has its own sign language. I preached out loud in Mandarin and the pastor’s wife translated into sign language. Even though it was quiet, the responses on the faces of the worshipers were animated. Some of the children and young adults can hear, but everyone can use sign language. 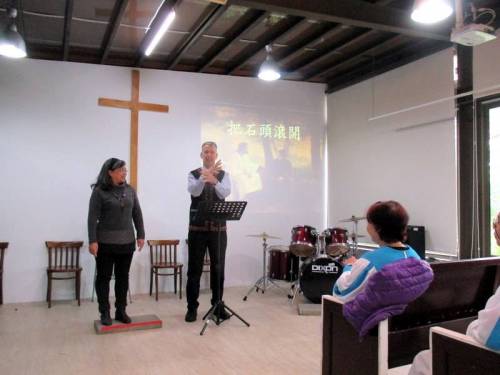 I talked about the fear of that first Easter and how God rolls away the stones of fear in our lives. The sign for “do not fear” is two hands pushing out and the sign for fear is two fingers on the palm shaking, like two legs of a person shaking. It is an apt symbol for the Easter text where we read that the guards at the tomb shook and became like dead men.

It made me think of an Easter here several years ago when on Easter afternoon I was at the domestic airport checking in for a flight to the south when we had a big earthquake. The ceiling tiles began to fall and we all ran outside, leaving our documents at the check-in counter. As we stood in front of the airport waiting for the ground to stop shaking, a reporter, without my knowing it, took a picture. The next day I, along with a number of other passengers, was on the front page of a local paper looking up at the swaying streetlights. It was the first Easter when I really identified with those shaking guards.

It is not easy for deaf folks to believe in something that they cannot see. So Pastor Wu and his wife have done a beautiful job of sharing the Good News with deaf folks in Taipei. They are currently translating their Bible into sign language by filming the signing and putting it on the Internet.

Pastor Wu told me about his eight years at the seminary, where he studied first for his undergraduate degree and then his three-year Master of Divinity degree. His wife translated every class lecture during those eight years. The seminary later gave her an honorary degree. But Pastor Wu used to tell his classmates who slept through class, “Please give me your ears; I really want to know what the professor is saying.”

It was a joy today to see the fruit of this couple’s labor as deaf folks of all ages participated in a very quiet Easter story.