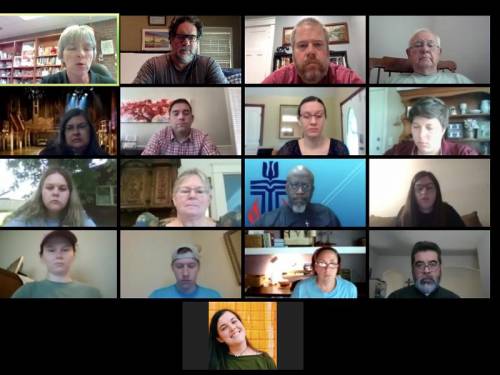 Members of the Synod of the Sun’s Network for Dismantling Racism during a June 4 video meeting. (Contributed photo)

Some symptoms of racism might be obliterated with a wrecking ball approach, but a new Synod of the Sun network aims to help dismantle the structure and proactively remember grim events of the past, including the Tulsa Race Massacre of 1921.

“If the hope and goal is for everyone to be equal, then the hard work that we are doing will be undoing, dismantling that structure and building anew,” said Rev. Jennifer Hardin, 31, associate pastor at First Presbyterian Church in Stillwater, Oklahoma, and a member of the synod network that she helped name.

Activity in the Synod’s Network for Dismantling Racism has accelerated since its formation in January. Members have built a list of 10 goals with a mission to heed “God’s ongoing call to love and justice … to (see) the atrocities of systemic racial injustice” and to “equip and engage for transformation throughout society.”

Valerie Young, Synod Leader and Stated Clerk, lived in the Tulsa area several years ago, but had never heard of the Race Massacre. She learned about it during a conversation with Rev. Jerrod Lowry, an African American pastor who is now the general presbyter for Coastal Carolina Presbytery, and learned more on a synod leaders’ trip to Montgomery, Alabama.

“We don’t want confrontation,” Young said. “We want to be gently prodded. That is what has been ingrained in us — it’s part of white privilege. Now it’s time for white people to get uncomfortable.”

Young drafted Commissioned Pastor Kristy Rodgers for synod leadership and then asked her to start the network. Rodgers had been on a slow simmer over racism and decided that she could not “stand on the sidelines any longer.”

Now she has read three books describing the destruction and massacre of a thriving community in a 35-block area of Tulsa often referred to as “America’s Black Wall Street.” As a teen she moved from a small Wisconsin town of 1,300 people to Tulsa’s Memorial High School with an enrollment of 1,300 students.

The synod’s Network for Dismantling Racism (NDR) is still defining itself in weekly meetings facilitated by Rodgers on a video conferencing service. About 40 members have signed on to confront racism in the synod’s geography of Arkansas, Louisiana, Oklahoma and Texas.

Hankins, an African American man from New Jersey, took the call in Odessa after a 15- year pastorate in Baltimore.

Young drafted Hankins to join Rodgers. Both are 57-year-old military veterans. Both are struck deeply by the Tulsa Massacre. Hankins sees the same “cloud of dark rage and anger deep within the human heart” motivating actions a century ago as well as the racist actions in 2020. Younger Presbyterians see the same concern.

“As a full-time college student in Tulsa, I see systemic racism and its consequences scattered throughout my community,” said Katharine Nipp, 21, a network member who is grateful the synod is taking a role in racial justice.

The NDR will host two educational events annually and facilitate antiracism training throughout the synod’s 11 presbyteries. The network aims to “identify and reject practices and policies that protect a racist status quo in our churches and communities.”

The workgroups of the NDR cover advocacy and activism, education, resources, and training in addition to planning the centennial commemoration in Tulsa next June.

The commemoration will be coordinated among Oklahoma’s three presbyteries and avoid duplication of other events led by the Tulsa Race Massacre Centennial Commission. The NDR will host an educational event to continue uncomfortable conversations and actions in the name of the gospel.

Shane Whisler for the Synod of the Sun, Special to Presbyterian News Service

Good and gracious God, thank you for the unending opportunities to share what we have and learn again and again that your grace is sufficient. Amen.