Politician, author and entrepreneur Stacey Abrams shares a bit of her faith story 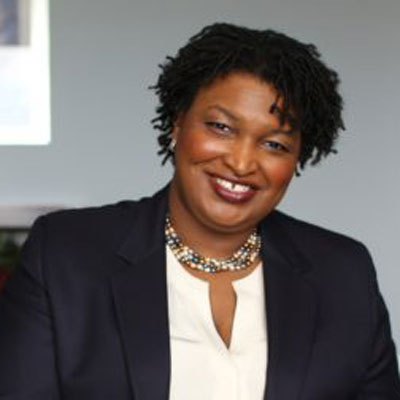 Abrams, the daughter of a clergy couple, spoke during free online festival lectures and sermons. She labeled her talk “Stewardship, Service and Redemption: Called to be God’s Ministers.” Her text was 2 Chronicles 7:11-22, which includes these words from God to Solomon following construction of the temple in Jerusalem, along with a palace for the earthly king: “When I shut up the heavens so that there is no rain, or command the locust to devour the land, or send pestilence among my people, if my people who are called by my name humble themselves, pray, seek my face, and turn from their wicked ways, then I will hear from heaven, and will forgive their sin and heal their land. … But if you [plural] turn aside and forsake my statutes and my commandments that I have set before you, and go and serve other gods and worship them, then I will pluck you up from the land that I have given you; and this house, which I have consecrated for my name, I will cast out of my sight, and will make it a proverb and a byword among all peoples. And regarding this house, now exalted, everyone passing by will be astonished, and say, ‘Why has the Lord done such a thing to this land and to this house?’ Then they will say, ‘Because they abandoned the Lord the God of their ancestors who brought them out of the land of Egypt, and they adopted other gods, and worshiped them and served them; therefore he has brought all this calamity upon them.’”

Abrams recalled her two summers interning at the Environmental Protection Agency while she was an undergraduate student at Spelman College. She wrote her senior thesis on the environmental racism she’d seen growing up near Gulfport, Mississippi, where she took in her first environmental lessons.

She, her parents and siblings would attend church on Sunday, then head north through the Piney Woods to visit her grandparents and great-grandmother, the daughter of sharecroppers, who would tell Abrams stories about her garden and the land. “They tended the land with grace that only comes from God,” Abrams said. “Whether they were cultivating the harvest on another’s land or plants they’d planted themselves, they were called to preserve life.”

Later, she realized this remarkable woman was “one of the first environmentalist I ever knew, but she never used that term. She spoke the language of our shared faith, the obligations that guided stewardship.”

Abrams said we’re all in debt on at least two accounts: “We owe this temple the Earth our stewardship,” she said, “and we also owe the Lord’s people our service.”

Hurricane Katrina, a storm that killed more than 1,200 people, struck Mississippi when Abrams’ father and mother were pastors there. Abrams and her younger sister drove from Atlanta to be with their parents 12 days after the storm passed. “The lovely Piney Woods had been ripped away. In their place were root balls,” Abrams recalled.

The sisters reached their parents’ parsonage, where their parents’ bed had been placed in the middle of the bedroom to avoid leaks in the roof. “We joined an assembly line of church volunteers where donations were pouring into mom’s church,” Abrams said. “We had been home for 15 minutes, but we got to work.”

When she and her sister left a few days later, they and other volunteers had distributed food to about 1,500 hungry residents.

“Our foes exist, but redemption is in the works,” Abrams told the preachers who were listening in to her talk. “From your pulpits, you care called upon to rise up against this mockery we have made of the Earth.”

In “the most prosperous nation on Earth,” nearly 100,000 people have lost their lives to COVID-19, she noted. While because of the pandemic “we will be tempted to put aside the responsibility of climate action, that is the wrong action and the wrong choice.”

And as a response to the pandemic itself, “grab the hands of the unemployed and unacknowledged and unseen,” she said. “You have spent your lifetime building your community, block by block. The ministry of redemption requires us to demand what Esther demanded, to deny the destruction of our people.”

“The joy of our faith,” she said, “is the constant promise of renewal and revival — if we are willing to set ourselves to the task and never waver.”

Lord, we ask that you bring a great light into the land. Through dreams and visions and the lives of your followers, help those who do not yet know you have the opportunity to respond to your kingdom message of Jesus. Amen.