After accident, ‘Surprise!’ from the pulpit pleases congregation members

The Old Meeting House in Frontenac, Missouri, will be ready for worshipers post-pandemic 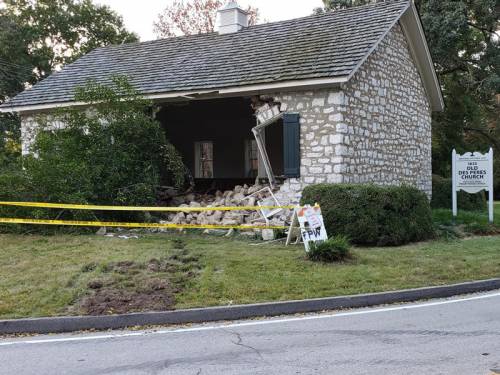 The historic Old Meeting House, the original Old Des Peres Presbyterian Church in Frontenac, Missouri, was damaged by an automobile in an Oct. 3, 2019 accident. (Contributed photo)

When the Rev. Carol DeVaughn welcomed the congregation of Faith Des Peres Presbyterian Church to virtual worship on a recent Sunday, those watching could hardly believe what they were seeing.

The interim pastor was standing in the Old Meeting House, a one-room stone church constructed in 1834 — which is also a significant landmark in the abolitionist movement.

“Grace to you and peace in the name of our risen Lord Jesus Christ,” she said. “And, surprise!”

The “surprise!” came because just seven months before the Memorial Day weekend service, the historic church in Frontenac, Missouri, had been extensively damaged when an automobile — traveling between 60 and 70 mph, according to police — ran into the side of the church near the pulpit.

St. Louis’s KSDK-TV reported that all that was left at the scene after the early morning Oct. 3, 2019 accident was “rubble and stones scattered all over the ground, broken glass and car parts still lying in the grass.”

“If it hadn’t been a historic church, our engineers might have recommended it be torn down.”

The original Old Des Peres Presbyterian Church, nicknamed the Old Meeting House, was built by a group of settlers who came by buckboard and wagon from the East and South, the church’s website states.

The little rock church was constructed on three acres of land donated by three families, each giving one acre. It was one of the first Presbyterian churches organized west of the Mississippi River.

“We can seat 60 comfortably there,” Barbara Abbett said of the historic church, where she has been a member for about 45 years and currently serves as clerk of session. “There’s no heat in it, so we generally only worship there during the summer.”

The Rev. Elijah P. Lovejoy was among the early ministers of the church. An abolitionist, he denounced slavery from his pulpit and in his newspaper, The St. Louis Observer.

Eventually he moved to Alton, Illinois, where he led the College Avenue Presbyterian Church and founded a newspaper called the Alton Observer, which regularly featured his anti-slavery columns. He was shot and killed in 1837 by a mob in Alton during an attack to destroy Lovejoy’s press and abolitionist materials.

The original land donors of the church stipulated that the congregation set aside part of the land for a cemetery. It has a designated section where slaves are buried in unmarked graves. In their honor, a stone memorial has been placed in the southeast corner of the cemetery as testimony to the grievous reality of their lives, the website states.

Folklore tells that Yankee soldiers nicknamed the church the Old Stone Meeting House during the Civil War. Considering that slave owners originally contributed land for the church, the church was rumored to be a well-known stop along the Underground Railroad.

The Old Meeting House served as the main location of the church until the 1960s, when a new larger church was built nearby.

In the 1970s, the church restored the old stone building. Those efforts were rewarded in 1978, when the church was added to the National Register of Historic Places, states the church history on its website.

Before restoration of the historic structure could begin, it had to be stabilized. An emergency restoration team was on site less than 12 hours after the accident, Abbett said.

Next, restoration professionals assessed the damage and began making repairs.

“After the accident, we couldn’t imagine what would happen, how it would be restored,” Abbett said. “But it’s such a treasure to us. And the community feels that way, too.”

A carpenter for 25 years, Harris said he was pleased with the final results.

Abbett said the repair bills for the restoration are between $125,000 and $150,000. Some of that cost may be recouped from the car owner’s insurance company, she said.

Sally Scherer, Writer and Communications Consultant for the Presbyterian Foundation