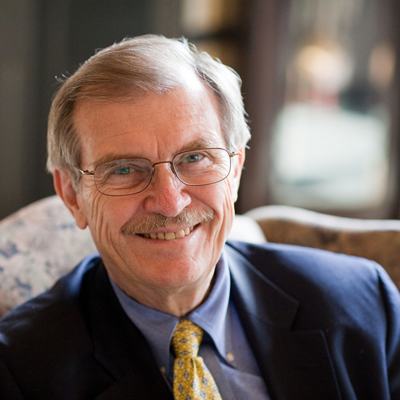 From an early age, the Rev. Dr. Darrell Guder knew he was going into ministry. In fact, in grammar school he envisioned himself in the mission field in the South Pacific.

“It was very romantic,” he joked recently. “I had the island all picked out.”

His childhood dream was never realized. But that turned out to be very fortunate for many generations of theologians, scholars and seminarians — and for the Presbyterian Church (U.S.A.) in general.

Throughout his 50 years in educational ministry, Guder taught, authored books and championed missional theology. He is the Henry Winters Luce Professor of Missional and Ecumenical Theology Emeritus and one of the founders of the Center for Church Planting and revitalization at Princeton Theological Seminary.

Because of the COVID-19 pandemic, Guder did not have an opportunity to receive his award in person at the General Assembly, which was held virtually.

Guder recently spoke to the Rev. Dr. Lee Hinson-Hasty, senior director for Theological Education Funds Development at the Presbyterian Foundation in a Facebook Live conversation about his call, his work and this award.

From his home in Seattle where he and his wife have recently retired, Guder said that he began to focus on missiology and the service and foundation of leadership for the church while teaching at Louisville Presbyterian Theological Seminary in the 1990s.

The text he was teaching from was “Transforming Mission: Paradigm Shifts in Theology of Mission,” by David Bosch. And, at the time, Guder was involved in a nearly formed network of scholars across the country who were discussing the idea of how the Church becomes missional.

It was at that point, at age 51, that he said it became clear that “everything I had ever done was for equipping leadership for the church.”

Swiss Reformed theologian Karl Barth had a huge impact on Guder. While on sabbatical, Guder discovered the “electrifying theme” that the vocation of the church is witness and he began to explore that idea.

“The challenge that we’re dealing with as we come out of almost 20 centuries of Christendom is the fact that the whole Christian movement in the West, as I think, bought into a compromised and reductionist gospel,” Guder said, “which focuses on individual salvation and the Church as an institution that manages that salvation.

“What gets lost is what was at the heart of the early Christian movement, which was the vocation of the Church as the witness to the gospel of Jesus Christ and the equipping of every follower of Christ to join the apostolate, to be a sent one, to be a part of the good news for the world.”

The theological task is to reclaim the centrality of mission, mission as witness, Guder said.

If mission is a part of our vocabulary it tends to be marginal, he said. We tend to keep mission as “one of the several line items of the Church,” Guder said.

Theologians such as Barth and Bosch believe mission defines both the purpose and the action of the Church and “it is all wrapped up in this biblical focus upon witness, our vocation to be Christ’s witnesses,” Guder explained.

Hinson-Hasty mentioned preaching stories in Romans and Paul’s letters where the people are not inwardly focused, but outwardly focused.

It’s “inhaling the vocation, the equipping the spirit, the vision of the gospel, in order in the world to exhale it. And every Christian can do it,” Guder said. “Every Christian’s vocation is witness.”

“That’s the rhythm of the Church,” Guder said.

A video tribute to Guder can be found on the Theological Education Fund Facebook page.

Sally Scherer, Writer and Communications Consultant for the Presbyterian Foundation

Loving God, may we practice the Golden Rule, remembering that you are with us always. Amen.