‘A virtual choir of international peacemakers’ 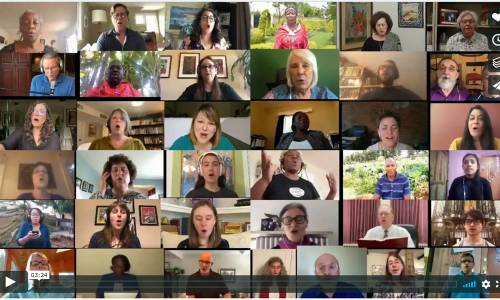 A choir of 38 International Peacemakers were gathered by the Presbyterian Peacemaking Program to share a rendition of the hymn “This is My Song.” (Screen shot)

Beth Mueller got a note from a man who saw the virtual choir of international peacemakers video she created for the Presbyterian Peacemaking Program and had a question.

“He wanted to know how we got all those people from around the world to sing at the same time on Zoom,” Mueller said, laughing.

It’s not quite that easy, but all the more rewarding.

Mueller, worship arts director at Shepherd of the Hills Presbyterian Church in Austin, Texas, learned the painstaking task of assembling virtual choir videos out of necessity. As in churches across the country, the COVID-19 pandemic had put all worship online for Shepherd, but the members of the choir still wanted to join their voices in song. Mueller shared one of her virtual choir videos with Carl Horton, coordinator of the Presbyterian Peacemaking Program, and he had an idea: What if they gathered a group of the program’s previous International Peacemakers, participants in its travel-study seminars and other trips, and others associated with the program to create a “virtual choir of international peacemakers,” as Horton put it?

By the time they arrived at the idea, Mueller had created several of these pieces, which have a fairly complicated production process. Anyone who has tried to sing “Happy Birthday” at a virtual birthday party knows that a bunch of people singing at once on a Zoom call sounds horrendous. It takes a bit more work to make all those voices come together as beautifully online as they do in person.

The actual process starts with singers recording themselves singing while listening to a sample track. That way, everyone is on the same tempo and the recordings and videos can be synchronized. Then singers send their video to Mueller, who separates the video and audio tracks. She sends the audio to Lucy Jordan, a member of the church band, who puts together a satisfying blend of voices — “I can ask her to make it sound like we’re in a cathedral, and she does it,” Mueller says — and she assembles the video. Then they sync the two together.

The hymn they chose was “This is My Song,” a hymn of peace set to the Jean Sibelius work “Finlandia.” Mueller had already found that hymns were easier to do than choral arrangements for these projects, so they went with the version in the Presbyterian Church (U.S.A.) “Glory to God” hymnal — it’s No. 340.

Horton emailed participants large attachments, including music for every vocal part plus a score with them all together and a PDF of the hymnal version, directions for recording the video, and the sample track to sing to. Horton said he was worried the PC(USA) email system wouldn’t let him send such a large message. All singers were asked to record a video of themselves singing the melody, and singers who were capable of singing harmony were asked to record a track singing their vocal part — soprano, alto, tenor or bass — as well.

Mueller opted to create a “build” version of the hymn, starting with a few singers in the first verse building to all 38 singers.

“That way, we could highlight all the different voices and accents we had,” Mueller said.

The “This is My Song” video, which can be downloaded for use in virtual church services, started as a response to the COVID-19 pandemic. But it ended up being released just as the United States was beginning a national reckoning with systemic racism in the wake of the killings of George Floyd, Breonna Taylor and Ahmaud Arbery.

“Part of the reason Carl and I did it was this is such a weird moment in history and in the world, and to be able to offer something that speaks to peace and unity, to offer something tangible, felt like a really important thing to do,” Mueller said. “The song is simple and beautiful … and I choke up every time I play it, and I spent 50 hours making the thing.

“It’s incredibly moving to have voices from all over the world singing a song of peace. It is really a powerful message: all the voices from all these places speaking to peace and unity in God.”

Gracious God, we give thanks that you call us to share Christ’s message of salvation and liberation with all your people. Help us to encourage and enhance each other’s efforts, just as you multiply the gifts we share. Amen.