Congregations Respond to Crisis in Syria and Lebanon 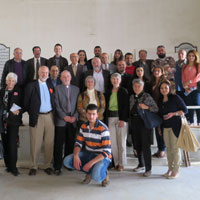 A few years ago, the Jarjours, a family who had recently relocated to Orange County from the Syrian city of Homs, visited our church. Soon our congregation began hearing about the crisis in Syria and looked for ways to become involved. I made connection with the pastor of their home church, and we began exchanging emails. At the same time, Los Ranchos Presbytery asked that I represent us all at the convening of the Syria-Lebanon Partnership Network in Louisville. So in April 2014, I attended with Arfan Jarjour, the patriarch of the family from Syria. From that has come a partnership between our congregation and the Presbyterian churches in Homs and another Syrian city, Meharde. Other partnerships have likewise been established between churches of the PC(USA) and churches that make up the National Evangelical (Presbyterian) Synod of Syria and Lebanon (NESSL).

The network has raised many thousands of dollars for NESSL for their relief work in refugee camps and with the many thousands of displaced persons in both countries. During the spring of 2015, members of the network traveled to the region and witnessed firsthand the unquenchable faith in the churches affected. Along with our mission co-workers Elmarie and Scott Parker, we visited and worshiped together, symbolizing the partnerships that continue to unfold.

Locally, our church has begun hosting Syrians from our area who seek a place to worship in Arabic, a fellowship that has grown to over 60 each Sunday. Other churches in our presbytery and denomination are linking together in similar ministries in response to the refugee crisis and to help create a community of Syrian folks here while continuing to assist those who remain in their homeland.