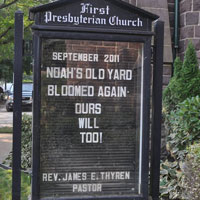 After First United Presbyterian Church of West Pittston, Pennsylvania, lost its building in Susquehanna River flooding of 2011, pastor Jim Thyren spoke often to his congregation about maintaining hope while wandering in the wilderness.

Even when the cleanup volunteers were gone and the congregation found a temporary home at a nearby Catholic church, the memories and mourning sapped the energy of some of the most hopeful members, and valiant attempts at continuing their familiar ministry were sometimes halfhearted.

Three miles away, Wyoming Presbyterian Church, which sits on higher ground, was spared. The dwindling congregation, which had donated some of its mostly unused space to the flood recovery effort, quietly continued its modest ministry.

Like buds developed by plants during a long winter, the idea of shared ministry grew among the two sets of members, and in 2015 the church without a home entered into a shared space covenant with its neighbor congregation, and was finally able to put down roots.

The congregations have embraced each other while carefully respecting the heritage and history of each church. Two worship services are now offered on Sundays, one by each pastor, but members are encouraged to attend either. Open invitations to all activities are shared, and the two congregations have begun to mingle.

Best of all, the soul-searching done in the wilderness has blossomed into new awareness that the garden of the church is outside of its building, sharing ministry in the community. The mission of First United Presbyterian Church of West Pittston at Wyoming is blooming again.

Father, you kept your promises to Noah, and to Moses, that the strife of flood and wilderness would end. May the congregations and communities who are wandering find hope in those promises, and find new life in the example of Jesus, Amen.