Presbytery of the Inland Northwest

Presbyterians Deliver Comfort in Response to a Night of Terror 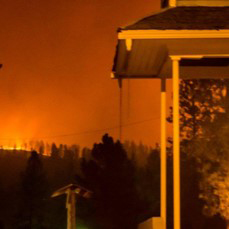 The piercing sound of sirens filled the night sky that was bright with an eerie orange glow. Hot embers cooled and turned to ash as they floated through the air, covering the ground like snowflakes—a strange sight for mid-August 2015 in the town of Kamiah, Idaho, where a wildfire was encroaching on area homes. Responding to a frantic knock at the door, a pastor greeted a young couple with their two small boys and two large dogs in tow, a look of terror and worry etched on their faces. They had been ordered to evacuate their home. Wind gusts were spreading the fire, which had resulted from lightning strikes several days earlier. The couple did not know where to go or what to do, so they went to their church. Within minutes other church members began arriving with similar stories.

Kamiah was surrounded by fire. All roads in and out were closed except one. Luann Howard, longtime pastor of the Kamiah and Kooskia Presbyterian Churches, decided to get the dozen refugees to the church in the nearby town, setting it up as an emergency evacuation center. Daylight brought news of unimaginable devastation and loss for the community. In all, 73 primary homes and 150 outbuildings were destroyed. The young exiled family returned to find that their home and belongings were gone, as well as several pets they had left behind.

Within a matter of hours, with fires still raging and the air heavy with smoke, the Presbytery of the Inland Northwest responded with donations of food, water and supplies personally delivered by the executive presbyter and others with the good news that Presbyterian Disaster Assistance representatives were on their way. What a comfort to have such prompt, wonderful and ongoing support!

God, you are good, even when life gets hard. Thank you for being there for us by showing your love and care through the people you send to minister to us in your name! Amen.