Minute for Mission: A Pentecost Experience for 1001 New Worshiping Communities 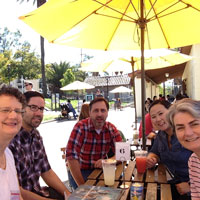 Caz Minter, Pastor of Live Oak Church, has been through many assessments with leaders who have started, or are considering starting, such communities. But he’s never experienced what he felt at a recent Discerning Missional Leadership Assessment in Los Angeles.

Having been through an assessment himself, Minter knows how powerful they can be. Doing a new church plant in Austin, Texas, he felt like many leaders who start something new: alone and under great pressure. At first he was resistant to what he’d learned about himself, but gradually came to realize the importance of having outsiders speak hard truth to those starting ministries.

“God used that assessment to save us,” says Minter. “It totally changed our lives and my approach to ministry.”

Minter says he was “a little nervous” about leading the Los Angeles assessment. Eight participants and eight assessors had gathered in the heart of the city, ready to dig deep into one another’s lives, in three languages.

“We’d translated from Spanish to English before,” says Minter, “but this time because of the diversity of participants, we decided to have Spanish-, Korean- and English-speaking assessors.”

As the group began to open up about their lives and families, “a beautiful thing” happened, Minter says. During the time of group conversations with everyone in the room, with three languages being spoken simultaneously, everyone was hearing one another, in their own native language.

“There was a sense of grace present,” he says. “Everyone recognized that while it might not be smooth, or perfect, we not only had cultural diversity—but another layer of language diversity.”

“It was a great picture of what the 1001 movement looks like,” says Minter, “multi-language all over the country, with the same heart and mind—connecting with people, in their own language.”

Since the 1001 initiative was launched by General Assembly action in 2012, over 330 new worshiping communities have sprung up across the denomination, reflecting the rich diversity of language, culture, race and age of this nation.

Gracious God, as we approach Pentecost, we celebrate this new Holy Spirit activity we see in our denomination in the form of 1001 New Worshiping Communities. We pray for its leaders, staff and the new disciples who are being formed daily. Amen.