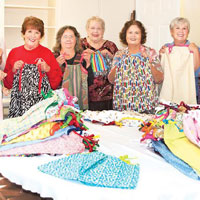 The Old Sew n Sews, our quilting group at Hopewell Presbyterian Church, had been in existence just long enough to complete our first baby quilt when a question arose: Did we want to take a hiatus for the summer since vacations would make consistent attendance difficult, or was there another option? We realized that there was indeed another option: we found patterns and pictures online for pillowcase dresses—cute little dresses, easy to sew, with no buttonholes or zippers required. There would even be jobs for those who didn’t sew, such as cutting, ironing and measuring.

Since we were in the middle of celebrating Hopewell’s 230th anniversary, we set the bar high. The goal was to sew 230 little dresses by the end of the year. We began by going through our fabrics at home. Then word got out. Fabric began appearing at the church. We put out a plea for double-wide bias tape, and it too began to appear. What fun! In many churches women don’t have many opportunities to simply converse, but Thursday afternoons became the time for fun, fellowship and creativity. We oohed and ahhed over each little dress completed.

Often our conversations would turn to the little girls who would receive the dresses. How we would love to see their faces as they received a brand new dress! We put the little girls on our prayer list.

But we wondered: Where were the dresses to go? Then someone called the church; a local woman was headed for Haiti. Could she take 40 dresses with her? Of course! Then more than 100 dresses went to Ghana. Another 89 went with Debbie Braaksma of Presbyterian World Mission to northeastern Congo.

Who knows where our next batch will land?

Who knew that God would use what was in our homes to bless little girls all over the world!

Loving and creating God, bless the children everywhere! Move us to work to bless each one. Amen.