The effort to help those most affected by HIV, AIDS 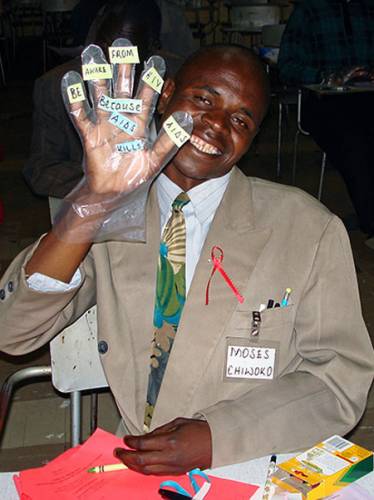 Malawi Matters is a nonprofit organization that develops and facilitates education on HIV/AIDS with the people of Malawi. (Contributed photo)

Providing and packing supplies like pens and pencils, making puppet kits during Sunday service for educational classes and holding events to raise awareness and funds.

Through these actions and more, Presbyterians are helping families and individuals who are hit hardest by the loss and struggles surrounding the spread of HIV and AIDS.

According to 2019 statistics from UNAIDS, 37.9 million people around the globe are now living with HIV. But Sub-Saharan (Central/East/Southern Africa combined) countries are disproportionately impacted, with 25.6 million of those cases being identified in the region.

“HIV/AIDS is still a worldwide issue,” wrote Phyllis Wezeman, executive director of Malawi Matters. “But it’s an issue that has been pushed under the rug for many reasons, including stigma and discrimination, and it’s becoming forgotten because people are living with it rather than dying from it.”

Wezeman, a member of First Presbyterian Church of South Bend, Indiana, leads Malawi Matters, a nonprofit that has not shied away from talking about the issue but instead has been tackling it head-on. The organization develops and facilitates HIV and AIDS education with the people of Malawi.

“It’s a mission lived in harmony with Malawians,” she explained. “Since Malawi is essentially an oral culture, with many who are illiterate and impoverished, our program brings meaningful training at a grassroots level in multiple ways, from designing lessons based on storytelling, music and art to equipping leaders with the information and supplies they need to help their residents understand this disease.”

Malawi Matters is 100% volunteer driven. Donations are used for developing and supporting training programs and for supplies. Wezeman’s church is part of the Presbytery of Wabash Valley, which has signed on as a Matthew 25 mid council.

This means the presbytery has committed to “radical and fearless discipleship” to embrace one or more of three focuses: building congregational vitality, dismantling structural racism and eradicating systemic poverty. The presbytery used its portion of the Peace & Global Witness Offering in support of Malawi Matters.

In addition, churches are regularly collecting and making supplies used in classes geared toward village leaders who then take what they learn back to other families. Funds donated or raised are also used for field work in more than 200 congregations and villages and more than 1,500 schools. Volunteers travel to Malawi to serve as facilitators on teaching teams and administrators during weeklong programs, and several churches make and donate washable, reusable sanitary pads for girls because it’s one way to keep them in school and to avoid early marriages.

It’s all having an impact. Community leaders, individuals, parents, families and others in Malawi are now rethinking how they’re living and recently shared ways the program has created new understanding and opened their hearts.

“Before we had the training, we separated all the people who were sick. We told them not to come to prayers (worship),” explained a church committee in Kongwe Presbytery. “After training, we realized how much harm we had done to them — how many had been afraid to go for testing or to disclose their status. We gathered and prayed to ask God’s forgiveness and made the commitment that we would never treat people like that again.”

But it’s not just congregations. Individuals are benefiting from the lessons supported by the church. A woman in church at the Mlanda Presbytery shared her story of loss.

“My sister and brother-in-law died of AIDS leaving three nieces and nephews who needed care, but I didn’t want them in my home because I didn’t want my own children to catch anything they might have. After the training, I realized HIV is not spread through ordinary, daily contact, and I was overcome with grief for the way I had treated these young ones. We took my relatives’ offspring into our home and are raising them as our own.”

It’s something that Wezeman says she’s is hearing over and over as the work to educate residents continues.

Through Malawi Matters’ unique, engaging, creative methods of HIV/AIDS education and equipping women/empowering girls programs, education is shared, discrimination is reduced, stigma is overcome and people go for testing, are supported, connect to treatment — and live.

O god, your Spirit broke into the world through Jesus Christ. Through our ministries, may we dare believe that your Spirit continues to break into difficult times and lives. May hope continue to grow in our churches and in our world. Through Christ we pray. Amen.