Asking for what is fair and just for all: It’s time to take a stand 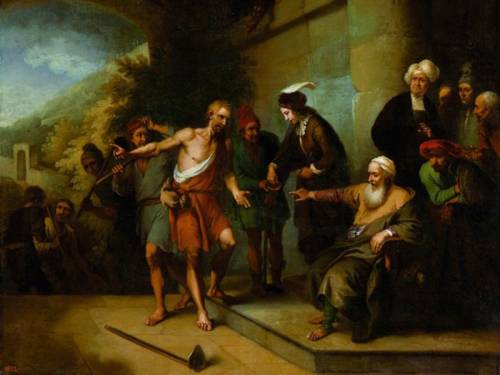 Christian Wilhelm Ernst Dietrich, “Parable of the workers in the vineyard,” (ca. 1790)

In Matthew, Jesus tells the story of a landowner needing workers for his vineyard. Before dawn, he strikes a deal with some workers, promising to pay a full day’s wage for a full day’s work. Apparently needing more help, he finds more laborers midmorning, assuring them that they’ll also be paid fairly. By lunchtime, he’s returned for more help. He goes out again midafternoon for workers and then again, with only an hour before closing time. At dusk, the last to begin working are the first to get paid — and instead of receiving the rate for one hour, they receive enough for a full day. They are ecstatic! The only people happier are those early birds — the first workers of the day — whose imaginations go wild dreaming about what they might do with the pay they will be getting. They might also be thinking that they’ll never show up for work that early again. Their dreams crash when they get paid what they had agreed to at the breaking of dawn’s first light. They shout, “It’s not fair!”

If we’re honest, we shout it with them. Whether it’s Jesus’ skill as a storyteller or our proclivity to feel aggrieved, we usually place ourselves with the early-to-rise workers in this story, thinking of the times when we have been treated unfairly. This passage reminds me of my first post-college job when a new graduate got paid the same as me, though I had already been working for two years. Let’s talk about fairness.

A few years ago, when teaching on this passage, I asked others to share a time when they had been treated unfairly. I expected stories like mine, but the tone quickly shifted when an immigrant from Nigeria spoke about his move to Oklahoma for college in the mid-1970s. The third week in his new home, he visited an all-white (non-PC[USA]) congregation where the pastor told him, “Your kind is not welcome here.” Hearing his experience, I realized instantly how privileged my perceived injustice was over my already-generous pay in my first job. I also saw the parable in a new light. I realized that in America, we who are white are often the late afternoon workers, receiving a metaphorical full day’s wage without having to put in all the work required by people of color. Let me explain.

One of the far too many unjust murders of African Americans last year was that of Ahmaud Arbery, who was out jogging when white vigilantes shot him. In the days following his killing, an article in the Chicago Tribune noted, “Arbery’s shooting death — and fears of racial profiling — weighs heavily on Chicago’s Black running community.” The article described all the precautions these runners take to stay safe. We might say they’re like the parable’s 6 a.m. workers, putting in a lot of work to get the payoff they want running a few miles without danger.

Meanwhile, like the parable’s 5 p.m. workers, I don’t have to put in much work to get the same payoff: running a few miles without danger.

The Belhar Confession, one of our denomination’s statements of faith, reminds those who are in the category of God’s late afternoon workers — showing up, doing half the work and getting full pay — that, “We believe that the church must therefore stand by people in any form of suffering and need, which implies, among other things, that the church must witness and strive against any form of injustice, so that justice may roll down like waters, and righteousness like an ever-flowing stream.”

We are called to live faithfully, joining Christ in service to those who are having to take precautions we would never think of just to live.

Chip Hardwick, Transitional Synod Executive of the Synod of the Covenant

Today’s Focus:  What is Fair and Just for All?

Living God, you are a God on the move and you call us to follow you. Give us courage that we may share your love and grace with others. Help us to hear your call and respond in faith by bearing good fruit and growing in the knowledge of you. Amen.