A place of great danger

Encountering God by comparing pandemic challenges with the wilderness experience 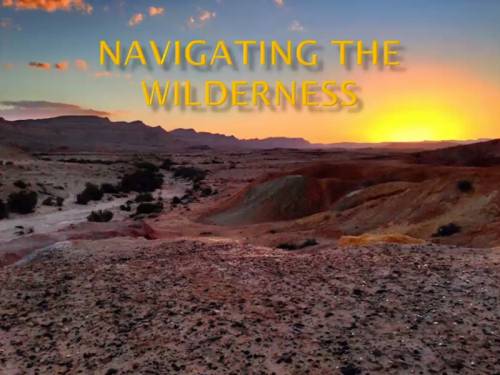 The sunset in the Negev Desert near Yeruham, a town in the southern district of Israel. (Wikipedia/Bill Brown)

Describing the Israelites’ passage through the wilderness in Exodus and Numbers as a metaphor for challenges the church faces today, Dr. William P. Brown took 160 people participating in the 2020 Vital Congregations Virtual Gathering on a journey into a place of great danger and extremes — a place where they can encounter God.

Leading the recent Bible study, the Columbia Theological Seminary professor said the wilderness is also a place of hope and guidance.

“It is revelatory,” Brown said. “Many of us, living with the triple pandemics of COVID-19, racism and poverty, are increasingly aware of the enduring reality of communities of color — Black, brown and Indigenous.”

Comparing what we are living through with what the Israelites experienced, Brown said they were living in the extreme opposites of deprivation and provision, which is where they cultivated resilience.

As they moved from enslavement to freedom — and from chaos to community — their greatest challenge, Brown said, was to move backward instead of forward into the blessings and wonder God had for them in the lessons learned along the way.

Deprived of water and food, the Israelites cried out because of their thirst and hunger. Moses struck a rock with his staff for water, and God provided manna — bread from heaven. But eventually, Brown said, “the manna became a curse.” Longing for the foods they’d eaten in Egypt, they cried out, “If only we had meat to eat!” They yearned to return to Egypt, but Brown said that would have sabotaged God’s plan to free them by molding them into diverse community.

“It’s often overlooked, but it wasn’t just Hebrews making their way to the Red Sea,” he said. “There were others with them who remained nameless.”

When the Israelites learned they would be in the wilderness for 40 years, they became impatient and impulsive. Despite Moses warning them, the people charged the land that the Lord had promised them, with disastrous results.

Brown sees the same thing happening in America’s struggle with the coronavirus.  As people became sick and tired of staying put, some rushed forward with impatience, crying out, “How dare you infringe on our freedom!”

“The struggle of people in the wilderness,” he said, “is trusting the provisions of God.” In Exodus 19:4–6, God gives the Israelites a new mission at Mount Sinai. Brown said they were now to be a blessing to the world — not only by looking inward, but outward, as a holy nation. And when God introduces the giving of the decalogue in Exodus 20 by opening with the commandment that “they are to have no other gods,” he said, that should be a reminder to us, too.

“The wilderness is the place and time to shed idolatries,” he said, “and become connected to the true source of vitality, the Lord our God.”

Knowing in a new way that they are God’s people, the Israelites forge ahead with creativity and innovation. They still fail and succeed. But now, Brown said, God holds them accountable, judging them in forbearance as well as blessing them.

Brown reminded those gathered that the Israelites’ greatest technological achievement came in the wilderness when they constructed the tabernacle. God gave them seven instructions for building it, which were parallel to the seven days of Creation recorded in Genesis.

“In the tabernacle, God was present to the people in the flesh,” Brown said, “walking through the thick and thin with them every step of the way.”

In closing, Brown reminded those gathered of one of the foundations for Vital Congregations found in Isaiah 43:16–21. Here, the prophet is having a wilderness experience with people in exile. He tells them something radical: to “forget the things of the past,” Brown said, “for God is doing something new.”

And when the coronavirus pandemic is over, Brown wondered, “What shall we remember from this time?”

Reminding that more than 400 years ago slaves arrived on the shores of what would become the U.S., Brown showed images of some things he wants to remember, which included graphs showing the number of COVID-19 deaths in the U.S. — and Black people dying at 2.5 times the rate of white people — and police officers and protesters kneeling together.

Eternal God, as you have created us and redeemed us for your loving service, so guide us to the darkened corners in the lives of others, that we might bring them the light of your eternal presence. Grant that, as in Christ you have served us, we might serve all your children, that you may never be without a witness in a hurting world. Amen.