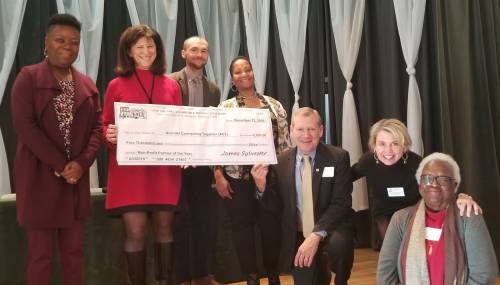 Gentrification was coming to Inglewood, California, and it was not pretty. Some people saw the change as a renaissance for a city that had been economically challenged. Some local congregations, however, saw the devastating change gentrification was having on the long-term fabric of residents in the neighborhood and knew it was time to do something — together.

The Rev. Dr. Harold E. Kidd, pastor of First Presbyterian Church of Inglewood, joined the pastors of the local Methodist and Episcopal churches who brought their congregations together in worship at Advent, Easter and Pentecost. Each service focused on listening to the community through story and testimony. After months of worshiping together, the congregations built enough trust and momentum to mobilize for change and stand up for their displaced neighbors. Through their efforts to organize with city leaders, Inglewood adopted dramatic protections for the roughly 60% of residents who rent, helping them stay in their homes.

When the Rev. Dr. Angela Cowser began tutoring in a neighborhood school in Nashville in the late ’90s, she noticed just how much the children were lacking in resources. She soon discovered the school wasn’t alone in being under-resourced. Several others were struggling as well. Cowser, who at the time was also heading a community organizing group called Tying Nashville Together, developed an audit for the schools to understand the extent of the needs. The community organizing group got parents together and sent them out on a fact-finding mission to 70 schools. The mission resulted in a long list of problems that needed to be addressed. With the findings in hand, 20 faith leaders met with the mayor. The result was $250,000 being committed to improve the school system, Cowser says.

Inglewood and Nashville are just two examples of how churches working closely with other congregations and community organizations can make a difference. This desire to fix what is broken grows more urgent these days as the COVID-19 virus has put the spotlight on the many injustices that have lingered in the shadows for too long. But as churches begin talking about what can be done to bring about change, one thing is for sure: Dramatic change doesn’t happen overnight, nor does it happen with one congregation working alone. It takes mobilized action known as “community organizing,” which involves getting out into one’s neighborhood to listen closely to the problems, talk to those on the front lines, work closely with those being impacted by injustices, and team up with other agencies that can help.

Almost a decade ago, the Presbyterian Church (U.S.A.) created the guide “Congregation-Based Community Organizing: Building Vibrant Congregations, Building Just Communities” to help congregations better understand what “organized power” is. The guide defines community organizing as “a method of working with faith communities to address the problems and concerns of their communities, and in turn, vitalize and strengthen the life of congregations.”

That often means partnering with other faith congregations and using specific tools to build relationships and increase capacity for change. Some of those techniques are:

One-to-One Conversations: Also known as “relational meetings,” these are meetings between two people in which they share their personal stories and reflect on their values, hopes and concerns.

House Meetings: House meetings give an opportunity for those gathered to share what is important to them and find common ground on what energizes them for change.

Listening Campaigns: A listening campaign is an organized series of one-to-one and house meetings to hear from a congregation or targeted community partners. Listening campaigns are designed to bring to the surface the issues that are relevant to a large group of people.

Community organizing also focuses on local issues that make a visible impact. The Rev. Jonathan Nelson, associate pastor at Ark and Dove Presbyterian Church in Odenton, Maryland, sees organizing as a way to get involved without entering into the partisan debates that dominate the national political scene. “I don’t know that a lot of churches have talked to their neighbors about the stuff that bothers them,” he said. “Organizing for something that matters to the neighbors, like quality education, is not necessarily partisan but can be political.”

Lord, we love our neighbors as we love you. Let us feel your embrace when we embrace others. Amen.