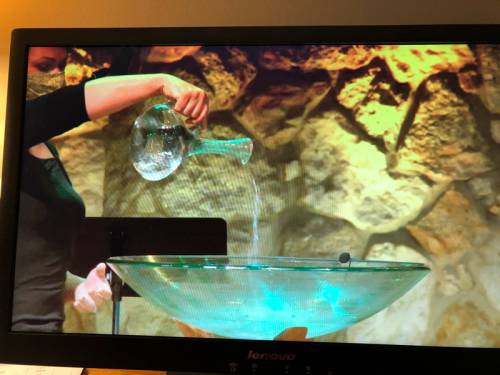 Water is poured to remind the 900 or so people participating in worship as part of the Presbyterian Association of Musicians of their baptisms. (Photo by Paul Seebeck)

The Rev. Jessica Tate, director of NEXT Church and a worship leader for the 2020 Presbyterian Association of Musicians Worship & Music Conference, told a telling story about life during COVID-19 with 2-year-old son, Huw, during opening worship on a recent Sunday. As PAM turned 50, it held its golden year celebration online, with live broadcasts originating from Montreat Conference Center.

Co-preaching from Washington, D.C., with the Rev. Dr. Bryon Wade of Davie Street Presbyterian Church, who was at his home in Raleigh, North Carolina, Tate said she has been sheltering at home with two other families since the middle of March, sharing child care and getting some social interaction.

With that, she and Wade acknowledged what the more than 900 people who registered for the conference from 38 states and three countries were feeling: They’d rather be celebrating the 50th anniversary of the conference at the Montreat Conference Center in western North Carolina, the conference’s only home.

Preaching from Hebrews 11:1-12:2 on the conference theme, “A Great Cloud of Witnesses,” a letter written to early Christians whose enthusiasm for the faith was fading Tate said, They needed a pep talk. And even more, they needed a deepening understanding and experience of Christ.”

Which, Tate said, she could relate to. With so much that is hard right now and so many things in the world not as they should be as Americans live with the twin pandemics of coronavirus and racism, her spirit is lagging, she said.

“I need my faith to be renewed right now,” she said, “because it’s hard to hope for things we cannot see.”

While these are difficult times, Wade said he is grateful for the assurance that comes in the epistle that we are not first ones to go through difficult times. He said God calls people in situations like these to step out in faith — especially in the uncertainty of what was are in now.

Wade’s favorite story in this Hebrews passage about the ancestors of our faith — that cloud of witnesses that has gone before us — is when the Israelites were going through the Red Sea.

“They were on the brink when God open the sea and made a water wall for them to go through,” he said. “That’s where we are right now, going though seas of uncertainty and uncharted waters. We think the walls are going to fall down. But they’re not, because God walks with us.”

For Wade, that means we have to take risk and trust — to have the faith, something we cannot see — that God is with us and will continue to make a way for us.

Just like 50 years ago, Wade said, when a group of people had a dream to put together a conference of music, which the church had not done before. They stepped out from different walks life because they believed that God’s people would deepen their faith by singing together, dancing together, playing drums together and learning from each other.

He said that they, too — the saints who have been here, some who are no longer with us — are also part of this great cloud of witnesses.

“The preacher of Hebrews makes this astounding claim that all who have gone before us need us, need you and me,” Tate added. “And so, we’re going be reminded this week of what it means to be a witness in the world.”

“Now faith is the assurance of things hoped for, the conviction of things not seen. Indeed, by faith our ancestors received approval. By faith we understand that the worlds were prepared by the word of God, so that what is seen was made from things that are not visible.” — Hebrews 11:13 (NRSV)