Ferncliff’s ‘Camp in a Box’ draws more than 1,300 participants 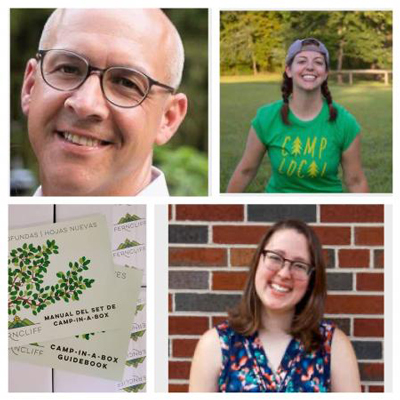 In the early days of the pandemic, Joel Gill, the executive director of Ferncliff Camp and Conference Center in Little Rock, Arkansas, gathered staff together for a brainstorming session.

As Ferncliff staff was searching for ways to engage with campers without being able to host them at camp due to COVID-19, an idea began to emerge: What if one of the ways to survive economically during the pandemic was by thinking about others who were also having difficulty doing in-person programming? Let’s partner with them, staff members decided, to provide Camp in a Box materials that could be used for Vacation Bible School.

“We knew churches were struggling as well with faith formation resources from a distance,” Gill said.

Gill reached out to Gilmont Camp, about four hours away in Gilmer, Texas, located in Grace Presbytery. Both Gimont Camp and Grace Presbytery loved the idea, as did the other presbyteries Gill reached out to: Cimarron, Eastern Oklahoma and Indian Nations presbyteries in Oklahoma, along with Presbytery of the Pines in northern Louisiana and southern Arkansas all said yes to participating — and Camp Hopewell in Oxford, Mississippi, endorsed its use in the Presbytery of Mississippi.

Originally, Gill thought Ferncliff could sell 500 Camp in a Box kits, but sales soon doubled that initial estimate. While he envisioned Camp in a Box as a “regional thing,” Gill said Ferncliff has received orders from churches in more than 20 states as far away as Alaska. Ferncliff even received an international request from England.

Thanks to a grant from Grace Presbytery, the Camp in a Box materials have also been printed in Spanish.

“We weren’t really sure how this would work out, but we wanted to be nimble,” Gill said. “At times it felt like we were building the plane as we were flying it.”

Ferncliff’s idea wouldn’t have been possible without partnerships, including one with Inside Out, which produces an all-inclusive summer camp curriculum and gave Ferncliff permission not only to use its “Deep Roots New Leaves” curriculum but also to adapt it for Camp in a Box use.

While he’s pleased with how the Camp in a Box idea came together, Gill said it didn’t surprise him. As Ferncliff began emphasizing partnerships dating back the past 20 years, he said he’s noticed subtle shifts in Ferncliff’s ability to change and adapt. Both have become part of Ferncliff’s organizational structure, and both occurred because of Ferncliff’s reliance on partnerships, he said.

“I’ve learned that if we had an idea mostly figured out — and a willing partner or two — we should act on it,” he said. “After all, those we partner with often have the same goal we do: to help folks deepen their faith.”

Through a virtual password-protected online camp portal, Ferncliff is also providing free optional activities to go along with the Camp in a Box materials.

So, in addition to getting boxes ready, Ferncliff’s small summer staff also created videos for those virtual optional activities and working on maintenance programs on Ferncliff grounds.

Following guidelines from the state of Arkansas, Ferncliff provided day camp in July on a limited scale to three or four groups of 10 campers or fewer. Campers were required to social distance. Picnic meals in boxes were allowed outside.

Gill said Ferncliff staff looked at state restrictions around reopening and thought, “Who better than us?” to meet parents’ need for “quality child care and kids needing to be outdoors.”  Staff reasoned that Ferncliff has the space and the ability to live within the guidelines provided by the Arkansas Department of Health, which suggested they hire extra staff as a precaution.

“COVID-19 hasn’t been a cakewalk,” Gill said, acknowledging the camp has taken a significant financial hit. “But we’re trying to not get bogged down in what we can’t do and focus on what we can do.”