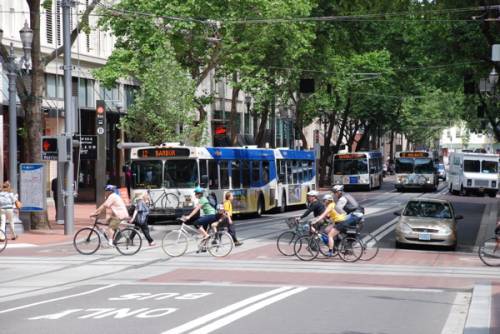 Buses on the southbound Portland Transit Mall (in Portland, Oregon), 5th Avenue, with cyclists crossing on Morrison Street. Photo was taken after MAX light rail tracks were added to the mall but before they were brought into use. Bicycles are also being carried on the fronts of the buses.
Photo by Steve Morgan, via Wikimedia

Although the 222nd General Assembly (2016) of the Presbyterian Church (U.S.A.) ended nearly six weeks ago, Presbyterian congregations near the host city of Portland, Oregon, make a key theme of the assembly—environmental stewardship—an ongoing ministry.

Portland is widely recognized for its passion for sustainability. This is a city that captured the nation’s attention last year when protesters suspended themselves by cables from the St. Johns Bridge in an effort to prevent the departure of a Shell Oil ship expected to participate in Arctic drilling efforts. This is a city where 17,000 people bicycle to work every day, or 7.2 percent of commuters—the highest percentage of any large US city. This is a city with farmers markets in every neighborhood and for every day of the week.

Colonial Heights Presbyterian Church, one of three congregations in the Portland area recognized by PC(USA) Environmental Ministries as an Earth Care Congregation, is concerned about energy efficiency and waste, but has also been recognized locally as a pollinator habitat due to special landscaping designed to promote the flourishing of bees and other pollinators. Members of Colonial Heights are continually seeking to improve their practices and partner with local organizations to increase their impact.

A short distance away, Mt. Tabor Presbyterian Church regularly hosts events related to earth care. The Greater Portland Sustainability Education Network utilizes their space to hold virtual conferences with organizers around the world who are pioneering methods for small organizations, including churches and schools, to move to sustainable energy systems. In March, for example, local Presbyterians and their neighbors came to learn about options for installing solar panels on their facilities.

Indeed, environmental education is a priority in many congregations in this part of the country. In an informal survey at a meeting of the Presbytery of the Cascades, numerous congregations reported being currently involved in or recently having concluded adult education on the subject of earth care.

Therefore, no one should be surprised that Oregonian Presbyterians were eager to highlight this faithful stewardship when several thousand of our friends came to the Pacific Northwest this summer. “We were so pleased to welcome folks to Portland and to show off, a little bit, our commitment, as a city, to best ‘green’ practices,” said Beth Neel, co-pastor of Westminster Presbyterian Church and co-moderator of the Committee on Local Arrangements for the assembly.

All in all, the emphasis on earth care reflects the PC(USA) environmental policy adopted in 1990, which says, “God’s works in creation are too wonderful, too ancient, too beautiful, too good to be desecrated. Restoring creation is God’s own work in our time, in which God comes both to judge and to restore.”

Creator God, you formed the earth and called it good. From the earth you brought forth food to nourish and sustain us. Teach us to be good stewards of what you provide, and help us to be a blessing through our stewardship of your good gifts. Amen.