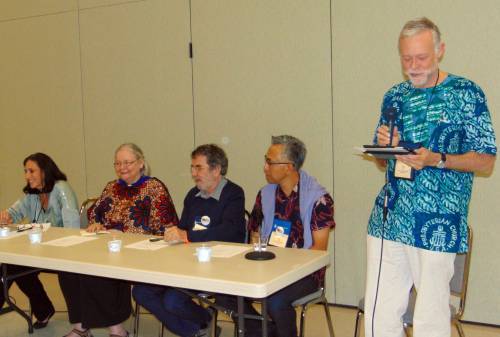 At the recent World Mission Café, an event at the 222nd General Assembly (2016), mission co-workers and staff, ecumenical partners, mid council leaders and congregational representatives gathered to share stories of the joys and struggles of day-to-day mission partnership around the world.

Doug Tilton, Presbyterian World Mission’s regional liaison for Southern Africa and Madagascar, a mission co-worker for more than 25 years and panel moderator for the event, said time and time again, he has seen the importance of a ministry of accompaniment. Citing an African proverb, he said, “If you want to go quickly, go alone. If you want to go far, go together.”

Tracey King-Ortega, mission co-worker and regional liaison for Central America, has seen the importance of working together. In El Salvador, sometimes dangerous and unstable, she worked with partners to look in-depth at how the church could be the voice of peace and reconciliation in that part of the world. Working together they created the first Ecumenical Conference for Peace and Reconciliation.

She pointed out that the mission of accompaniment is a powerful two-way street. “We were celebrating my husband’s birthday a few weeks ago with friends and associates at home (in Managua, Nicaragua). Everyone was on their way home when I learned my father had passed away. As soon as they heard, they immediately turned around and came back to be with me, covering me in love and prayers.”

Janet Guyer, mission co-worker in Malawi, believes our ecumenical partners help us “look at things with new eyes, to look at ourselves in new ways.” In 2002 she was invited to take her experience in HIV and AIDS ministry to Africa. For the next 11 years she served as a regional AIDS consultant working with partner churches in Southern Africa to prevent the spread of AIDS and to care for those affected by it.

Undaunted by the enormity of the epidemic, and working with church partners, together they developed the Footprints program, training teams in each village to become local contacts to combat misinformation and to provide advice. They quickly became revered experts.

Burkhard Paetzold, mission co-worker in Germany since 1998 and regional liaison for Central Eastern Europe, talked about how young adults bring energy and new ideas to his work with the Roma people. Don Choi, new mission co-worker in Indonesia, told the group a story he had heard about the aftermath of violence between Christians and Muslims in the late 1990s. Normalcy began with the women sat down together to tell their stories. “In the morning,” he said, “the village was a different place.”

René Myers, mission engagement advisor, relayed a favorite story from Scott Parker, associate for ecumenical partnerships in Syria, Lebanon and Iraq. In 2009, Syrian Christians had to choose whether to worship discreetly and keep a low profile or to reach out into the community, which could be dangerous. They chose to reach out, building a Christian preschool that began with 27 students. Rapidly it grew to 400 students, 87 percent of them Muslim. The growth of the school began to concern the local imams, who told the parents to withdraw the students. But the mothers told the imams they would not take their children out of the school. They liked that their children were learning “the ways of peace, love and forgiveness.” Instead they asked the Christian community to build a school for elementary students.

Dave Barstow of Westlake Hills Presbyterian Church in Austin, Texas, said members of the church, which has a partnership with Lusaka, Zambia, initially felt as if they had to “build something” or “do something” on mission trips. But they quickly learned that the best way to be effective partners was to do whatever the partner was doing. They never went with an agenda until years into the partnership. Recently the Zambian community decided to build to build a special building. Its name is the Westlake Hills Prayer House.

Jesus replied, “Anyone who loves me will obey my teaching. My Father will love them, and we will come to them and make our home with them. Anyone who does not love me will not obey my teaching. These words you hear are not my own; they belong to the Father who sent me.

“All this I have spoken while still with you. But the Advocate, the Holy Spirit, whom the Father will send in my name, will teach you all things and will remind you of everything I have said to you. Peace I leave with you; my peace I give you. I do not give to you as the world gives. Do not let your hearts be troubled and do not be afraid.

“You heard me say, ‘I am going away and I am coming back to you.’ If you loved me, you would be glad that I am going to the Father, for the Father is greater than I. I have told you now before it happens, so that when it does happen you will believe.”