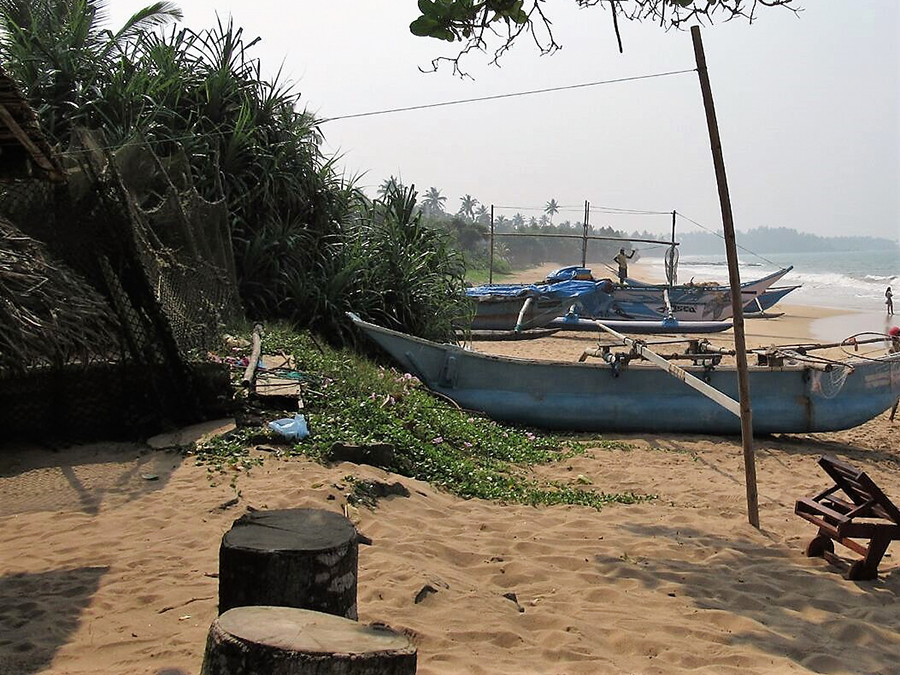 Sri Lanka is an island nation in the Indian Ocean off the Southern Coast of India. Until 1972 it was known as Ceylon. Fishing is an important part of the island’s economy. (Photo by Kathy Melvin)

Overture 10–01, which was passed at General Assembly 222 (2016) in Portland, Oregon, directs the ministries and agencies of the Presbyterian Church (U.S.A.) to “begin taking steps as consumers, as investors, and as followers of Jesus Christ, to help ensure that the scourge of slavery is eradicated, at least, for the supply chains of those with whom we do business.”

The group was hosted by a PMA global partner, the National Christian Churches in Sri Lanka (NCCSL), whose goal is to address human rights issues and fair labor practices in two of the nation’s primary economic strongholds, tea plantations and the garment industry.

Although workers at the tea plantations are not considered “forced labor,” most will never make enough money to break the cycle of poverty for themselves or their families.

The garment industry is Sri Lanka’s leading industry, responsible for about 45 percent of exports. There are more than 900 factories, exporting goods mostly to the United States and the United Kingdom and serving major brands such as Victoria’s Secret, Tommy Hilfiger and Liz Claiborne. The factories are considered better than many other Asian countries’.  Despite the availability of good jobs, there is a chronic shortage of labor in the garment industry and the turnover rate is high, due in part to the country’s cultural norms. Men are the head of the household and handle money. Women are expected to enter into marriage and stay home to cook and raise children. Young women come to work in the garment industry in Colombo, but many are asked to return to their villages to marry. Others become homesick and don’t return to the manufacturing facilities after holiday breaks.

Substantial numbers of working-age women are recruited to travel to oil-rich countries such as Saudi Arabia and Kuwait as domestic help. Some women make fair wages and are able to return home and buy both luxuries and necessities for their family. Others are not so lucky.  Some disreputable recruiters confiscate women’s passports upon landing at the airport and the women essentially become slaves of the employers. Some are beaten, some given only one meal a day, and many are paid little or never paid. The women have no standing in the country and have no passport to return to their home countries.

Tourism is Sri Lanka’s third-largest industry, but because it is culturally inappropriate for Sri Lankan women to work in the service industry, women come to the country in large numbers from India, Bangladesh and Nepal. The International Labor Organization estimates as many as 200,000 people come to work in the service or garment industries, but the government reports that only about 25,000 work permits have been issued. This lack of accountability is a cause of continued concern.

Ethnicity has contributed to cultural unrest in Sri Lanka. In the early 1800s, there were about 3 million Sinhalese, who are mostly Buddhist. When the United Kingdom colonialized the country — named Ceylon at the time — the government brought in about a million Tamil, mostly Hindu, from India to work on the coffee, tea and rubber plantations. A civil war between the two ethnic groups officially ended in 2009, but the minority population Tamil still feels discriminated against on many levels. There are an estimated 16 million Sinhalese and about 6 million Tamil.

NCCSL is working with the Sri Lanka Malayaha Tamilar Rights Coalition, a group advocating for the rights of the Malayaha Tamilar community, and last year worked to prepare a review assessing the human rights situation of the minority community.

“Sri Lanka has provided a home to PC(USA) mission co-workers for years. The country is not without its challenges,” said Mienda Uriarte, World Mission’s coordinator for Asia and the Pacific. “But this tiny island nation is strong and resilient. Many of the people we encountered have forged positive pathways that provide opportunities for individuals to honor their families while providing for them. I am so glad we could make this trip and look forward to nurturing the relationship with our global and ecumenical partners in Sri Lanka.”

Loving God, we pray for people who feel hopeless in a world that can be traumatic and overwhelming. Show us how to serve them, in service to you through the love of Jesus Christ. In Christ’s name. Amen.