While continuing its important work, committee will also look back, culminating with a celebration in Rochester, N.Y. 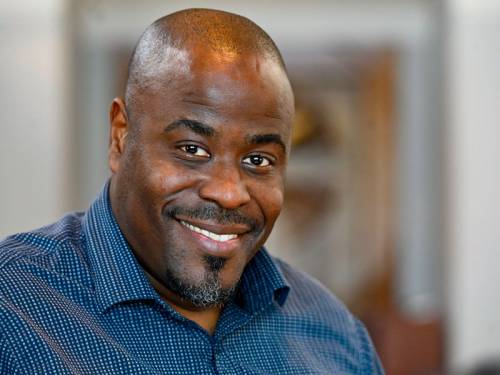 The Rev. Dr. Alonzo Johnson, coordinator for the Presbyterian Committee on the Self-Development of People, said the committee’s teachers are the communities with which it partners to alleviate poverty. (Photo by Rich Copley)

LOUISVILLE — As we enter the 2020s, the United States finds itself frequently looking back to the early 1970s — a similar time of harsh political polarization, with issues of race and poverty a prominent part of our conversations and a church wondering how to address them.

That is where the Presbyterian Church found itself as the 1960s turned to the ‘70s, and this year it will be celebrating one of the major answers to that dilemma: The Presbyterian Committee on the Self-Development of People (SDOP).

This year, SDOP will be continuing its important work of walking alongside communities that want to make their lives better. But it will also take some time to recognize its 50th anniversary, culminating in a celebration in Rochester, New York, where SDOP officially launched at the 182nd General Assembly of the then-United Presbyterian Church, after a year of meetings.

From the beginning, the term “self-development” was key. The direction was to create a program to assist “deprived, impoverished or handicapped people, anywhere in the world, in their development,” according to “From Dream to Reality: A Contextual History of Twenty Years of the Presbyterian Self-Development Program,” by James A. Gittings. In addition, the book says commissioners “instructed the Moderator to create in the committee a body that would give concrete expression to Presbyterian concern for the difficulties of the country’s minority populations.”

Gittings’ book, which was published by the committee in 1993, details the formation of the committee and trials and triumphs over its first 20 years. Since its inception, SDOP has been supported by the One Great Hour of Sharing (OGHS) special offering. Each year, a Sunday during Lent is designated SDOP Sunday. This year, that is March 15, and the ministry is creating a special edition of its annual SDOP Sunday Resource, which details many of the programs SDOP supports and includes worship materials related to combating poverty and structural racism.

“One of the powerful things about Self-Development of People that is really noteworthy is that it has been a ministry to teach the church about the intricate issues of poverty,” Johnson says. “And we do that because our teachers are the community. Our teachers are the projects that we fund, the connections we make in the community. And that’s something that’s incredibly, powerfully relevant about this … that we hear from the communities. The communities teach us what it means to engage poverty in the way that is authentic, relevant and substantive.”

As it enters its sixth decade, the program remains close to its original concept: SDOP invites people in communities impacted by poverty to apply for grants, telling the committee how they will use the funds to improve the community and what will be the expected benefit of the project. The committee does not fund organizations. Rather it wants people in communities to organize together in groups of 10 or more and propose a project.

The national committee is a racially, ethnically, geographically, and increasingly generationally diverse group that meets four times a year to discuss grant applicants, learn about the areas it visits, and engage in group training.

This week, the national committee will gather in Las Vegas and part of the agenda will be antiracism training with the Rev. Denise Anderson of the Office of Racial & Intercultural Justice, one of SDOP’s fellow Compassion, Peace & Justice ministries (CPJ), and the Rev. Shanea Leonard of PC(USA)’s Racial Ethnic & Women’s Intercultural Ministries.

In recent years, collaboration with other ministries has become a growing part of SDOP’s portfolio, such as teaming with fellow CPJ and OGHS ministries, the Presbyterian Hunger Program and Presbyterian Disaster Assistance, on projects in places such as Puerto Rico.

Two other huge features of SDOP are international work — Panama is a current country of focus — and local SDOP committees based in presbyteries and synods, doing the same sort of work as SDOP at a concentrated, local level.

To Johnson, the work of SDOP falls in line with the Presbyterian Mission Agency’s Matthew 25 invitation to address issues including systemic poverty and structural racism.

“It’s a time for us to be in conversation about the church is called to address the issues of poverty,” he says. “It’s a time for us to be real about how we will engage communities and how we will allow communities to engage us to address these issues of poverty. And so this year is going to be a time of learning, a time of growth and a time of celebrating the way God in Jesus Christ has been active in this ministry.”

Presbyterian News Service and social media outlets will be sharing stories and information about SDOP’s work and upcoming golden anniversary events and celebrations.

“The 50th year is about celebration, but it’s also about education,” Johnson says. “And it’s about connecting with our SDOP folks who’ve been involved in this ministry for a long time, but also creating awareness for the church for a new generation to take hold and understand the great work that SDOP has done over the years.”