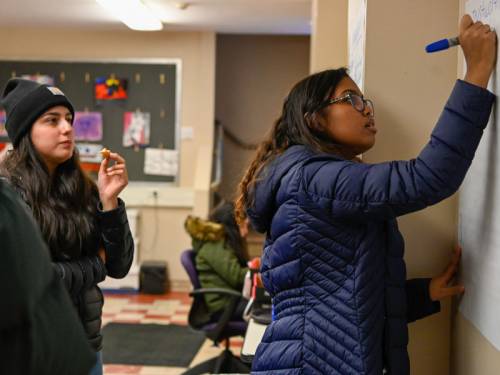 Karla watches while Merarys takes notes during a brainstorming session of the Youth Advisory Board in Detroit earlier this fall. (Photo by Rich Copley)

Gathered around long tables in the basement of the Southwest Detroit organization’s headquarters in a former church building, the students discussed a wide-range of topics from recapping a recent visit to the state capital in Lansing to meet with legislators, planning for an upcoming event, focusing their leadership skills, and unpacking a recent cyberbullying incident at one of their schools. 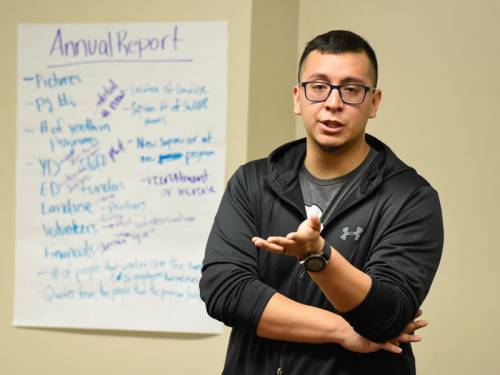 Edgar Gomez is the youth leadership coordinator at Urban Neighborhood Initiatives in Detroit and the adult ally to the Youth Advisory Board. (Photo by Rich Copley)

“Within the last several months, they’ve been working around the issue of bullying in the schools,” says Edgar Gomez, youth leadership coordinator at UNI and adult ally to the group, which is in the process of changing its name to the ELITE (Engaged Leaders Initiating Tomorrow’s Education) Organizing Group. “One of the things that we’ve learned in our research is there’s not enough support that happens in the schools for victims of bullying. But also, there’s no prevention as well. So, as a group, we’re trying to learn what we can do to support our district, our community, but also working with our school district to make sure that youth have a voice in what happens.”

Giving youth a voice and the confidence to use it is a major aim for the Youth Advisory Board, which was awarded a $15,000 grant from the Presbyterian Committee on the Self-Development of People (SDOP) in September. The grant statement says the grant’s purpose is “to provide training in leadership development, civic engagement, education enrichment for 15 youth that will enable them to understand the political forces that shape their community, improve their learning capacity and serve as quality leaders to their peers and families.”

“Being part of the organization has helped me see how the neighborhood can improve, how it’s getting better,” said Jonathan, a senior at César Chávez Academy High School. “We get to give our feedback at how it can be better.”

To view a video on the Youth Advisory board, click here. 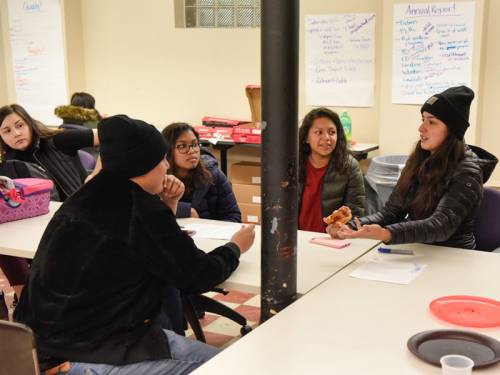 One of the major goals of the Youth Advisory Board is to get students to speak up and learn skills like leading meetings. (Photo by Rich Copley)

All the students live in the same ZIP code, 48209, though they go to several different high schools in the area. The group has been part of area organizing events, such as outdoor movie nights, as well as advocacy work.

Phyllis Edwards, a Detroit-based member of the SDOP national committee who recommended the group for the grant, said, “They are true leaders. I like the fact that they are really about giving back to the community, really finding a way to make sure the community in which they live is a better place as they grow older, and a place that they can come back to.”

Many of the students do have ambitions to go away to college and pursue careers in fields such as medicine and science.

“I want to go into the engineering field; I want to be sure we’re going to be able to explore space,” says Daniel, a senior at Western International High School. “But I also want to help get engineers into community organizing.” 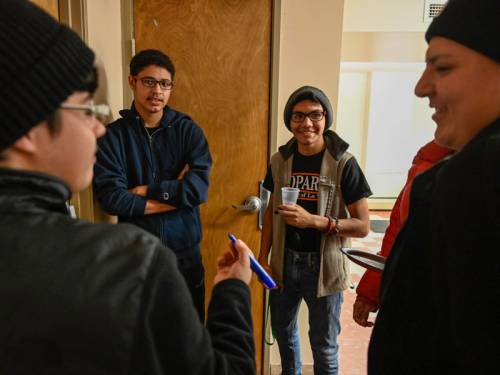 Cristian and Andy listen as Daniel leads a discussion during a brainstorming session with the Youth Advisory Board. (Photo by Rich Copley)

Merarys adds, “This gives us connections, and we already know Southwest Detroit, so whenever we get where we want to be, we can come back and help our community where we grew up.”

And where they are now, the students appreciate that they have been recognized by a national organization like SDOP, which gives grants worldwide.

“I’ve always been a part of Detroit, and Detroit has always acted like a small city — people most often regard it as a backdrop city — so it felt honorable to say that we were able to be noticed, acknowledged on a national level,” said Andy, a junior at Cass Technical High School.

In addition to the Youth Advisory Board, the SDOP national committee voted to fund three other groups this fall: 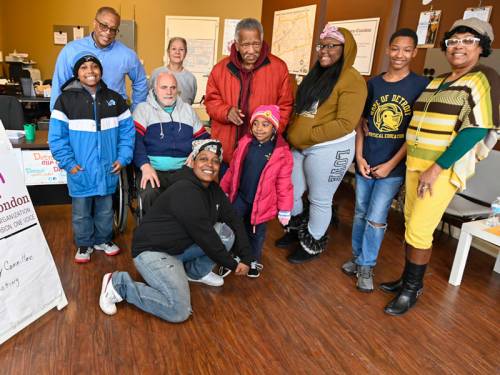