Individuals: Give online for Bernie and Farsijana Adeney-Risakotta’s sending and support

How do we negotiate the frontiers that lie between religious communities?  Frontiers are not fixed boundaries, separated by a wall, but rather spaces where we meet those who are different from us.  Ahmad, a Muslim student from Muhammadiyah University (UMY), wanted to meet me before class.  He was worried that the punch we served at our home was spiked with rum.  I said we would never put alcohol in drinks served to Muslims.  All the food we serve in our home is halal (permitted for Muslims).  Still, he was concerned because when he asked why the punch was so delicious, Farsijana said maybe it was because of the rum flavor.  I said I would ask my wife, but I was sure there was no alcohol in the punch.  Later Farsijana confirmed that she had indeed added a little rum flavor to the fruit juices, but no alcohol.  Ahmad thanked me and said he was so relieved.  He was concerned that I might be offended by his question.  I assured him that I was not offended.  He is one of my favorite students: earnest about his religion but eager to learn about a world beyond the boundaries of his experience.  It took courage for him to ask me about the punch. 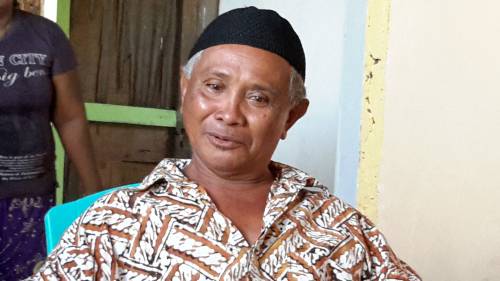 Uncle Din: the Head of the Mosque in Farsijana’s village

I teach a class at UMY on “Political Ideas,” with 70 Muslim students in two sections.  Most of them have never had a non-Muslim teacher, let alone an American Christian.  Coming to our house for dinner was for them a novel experience.  These bright young people sense no clear dichotomy between religion and social science, so some feel free to offer arguments rooted in their Islamic faith to counter concepts like democracy, human rights, social contract theory or other political ideas that shape the modern world.  I’m happy when students actually think about how their religious faith interacts with the modern world, rather than just parrot their professor. We have lively discussions on nationalism, capitalism, dependency theory, Marxism, neo-colonialism, religion and politics, balance of power, clash of civilizations, human rights, race, class and gender.  I encourage them to be critical, creative and to think for themselves.  They are learning to see the world through the lens of new ideas, while I am learning to see the world through their eyes. I feel happy because some say I’m their favorite professor.

The incident with the punch reminded me of Fatimah, a Muslim student who lived with us.  She asked:  “Since you are Christians, aren’t you allowed to eat pork?  They say that pork is delicious.  Why don’t you ever serve it?”  Farsijana explained that we do not serve food that is offensive to the Muslims who live in our household.  She quoted Romans 14 where Paul says he would never eat food that would offend his brothers and sisters.  Theological arguments about whether you should or should not eat certain foods are not nearly as important as the higher principle of loving those who have different beliefs from us.  Fatimah was doubly amazed, not only because we did not serve pork in our home, but also that we had a theological reason to explain it.  Love of our neighbors is always more important than asserting our freedom to live as we please. 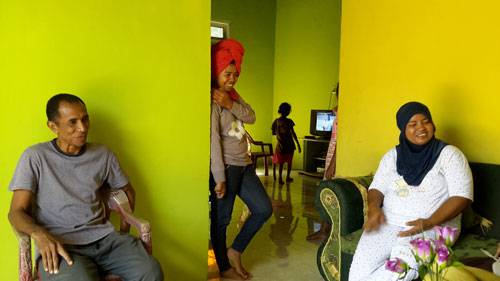 Members of Farsi’s Muslim family in the village

Frontiers between religious communities are not always safe places.  Farsijana has done research on how injustice, poverty, fear, lies and propaganda led to mass violence between Muslims and Christians in the North Moluccan islands during the transition to democracy in 1999-2002.  She has also studied how they found reconciliation and created peace.  She found that both Muslims and Christians worked from the premise that they were all sisters and brothers, children of the same family, subject to the same God. This openness helped heal deep wounds.  The Christian minority in the village asked the Muslim leaders what they should do to restore trust.  The Muslim leaders had two requests: 1. “Please pen up your pigs!  When the pigs roam freely around the village we Muslims felt unsafe as pigs are unclean.”  2.  “Please broadcast sermons in the church over loudspeakers so that everyone can hear them!  After all, the sermons in the mosque are broadcast so that you know exactly what we are saying.  But we don’t know if you Christians are speaking against Islam or blaspheming the Prophet, because we can’t hear what you are teaching.”  A few months ago Farsijana and I revisited this village and stayed with Farsijana’s adoptive Muslim family, who are leaders in the mosque.  Both Muslims and Christians agreed that the relationship between the two communities is now much better than it was before the conflict.

In May 2016 the Indonesian Consortium for Religious Studies (ICRS) held a conference on Religion and the Public Sphere in Southeast Asia, funded by the Henry Luce Foundation.  Scholars from Indonesia, Vietnam, Philippines, Myanmar, Thailand, Malaysia, Cambodia, Singapore and the U.S.A. met in Bangkok to discuss how their countries manage religion in public space.  All of these countries are multi-religious, but each has a different religious community as the majority.  Each society can learn from the others.  The Indonesian team focused on how the government tries to control cyberspace, especially to counter pornography, religious extremism and gambling.  The government blocks certain sites, but it is a losing battle.  Computer savvy kids can easily bypass the filters.  Global influences, both positive and negative, penetrate the hand phones and computers used by everyone.  The problems and promise of globalized media are everyone’s concern.

Muslims, Christians, Buddhists, Hindus, Confucianists and agnostics all face the same social problems in a world that is rapidly changing.  Fear and suspicion make the problems much worse.  Yet we have seen in our ministry in Indonesia that the frontiers between religious communities do not have to be places of conflict and hatred.  They can be creative spaces where we learn from each other and find new ways to face our common problems.

Farsijana and I are Christians, witnesses to the love of God in Jesus Christ.  We are living in multiple frontier spaces: frontiers between cultures, races, religions and values.  We do not have answers to the complex questions raised in this rapidly changing world.  But we are happy to work with our Muslim, Christian, Hindu and Buddhist neighbors to search for God’s promise of peace on earth, good will toward all humanity.  Our work is possible because of the generous support of individuals and churches who share our vision for justice and reconciliation between people of different faiths. Thank you! Please consider joining our partners in this ministry by praying for us and/or contributing to our support through Presbyterian World Mission. We are delighted that we will be able to visit some of you this summer.