The church is responding to the Syria-Turkey earthquake, GIVE NOW!
Make A Donation Click Here >
Home › What We Do › Where We Work › Co-workers › God’s Mysterious Grace

A Letter from Bernie and Farsijana Adeney-Risakotta, serving in Indonesia

A Long Loneliness in the Same Direction. —Dorothy Day

He who is not busy being born is busy dying. —Bob Dylan

Unless a seed fall into the ground and die, it cannot bear fruit. —Jesus Christ

I met Ohtawa in 1971 when we were studying together at the Discipleship Training Center (DTC) in Singapore. I was impressed with his combination of intelligence, discipline and sensitivity. He was a kind of samurai-warrior Christian. He was up every morning, exercising in the garden while others slept. Once he shocked us by suggesting that cultural conflicts between students from different countries were very precious. He said, “conflict is good, if you go through it, but not if you avoid it.” In 2017, when I recounted the story, he laughed and said, “Did I really say that?”

In 1994, Ohtawa and I shared a month-long “Life Revision Seminar” led by Dr. Hans Burke in the village of Rasa, high in the Swiss Alps. One day I made a flippant joke about something very serious that Ohtawa had said in group discussion. He turned on me in anger and said he did not like what I said. I was shocked into a different state of consciousness. I went outside and wept bitterly. I felt like Peter, after the cock crowed. I had betrayed someone I loved. Ohtawa’s harsh words were just what I needed to hear at that moment in time. During that month, I discovered who I was. 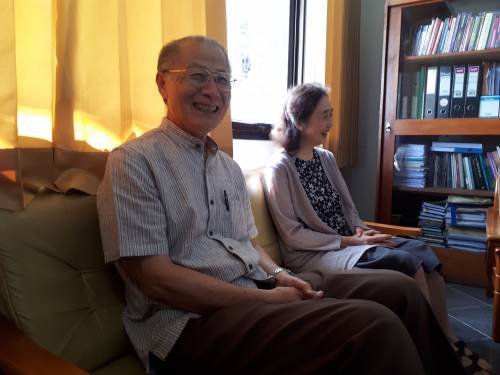 In 1996, Ohtawa came to Indonesia, and we held a three-day, silent retreat up in the mountains. I asked him to pray with me about whether I should marry Farsijana. Early in the morning, I took a photo of Ohtawa meditating. I didn’t see anything unusual, but when the film was developed, a ray of blue light shone across the photo down into his stomach. In Javanese mysticism, a blue ray of light in meditation is a sign of enlightenment. Fortunately, Ohtawa agreed that I should marry Farsijana!

Sometimes good ideas don’t work out the way we plan. I brought the idea of an interfaith spiritual retreat to the faculty of ICRS (Indonesian Consortium for Religious Studies), our Muslim-Christian doctoral and research consortium. To my surprise, the faculty were guarded and unenthusiastic. They suggested I bring the idea to the board of trustees. The board and faculty discussed the idea over several months, but there was neither consensus nor commitment. Some suggested that the idea of a spiritual retreat was a Christian idea that was foreign to Muslims. Muslim spirituality is based on praying with the whole body and mind five times every day, fasting during Ramadan, giving alms, sacrificing a goat at Idul Adha and going on pilgrimage. Only Christians go on spiritual retreats. Perhaps a retreat led by an unknown Japanese Christian crossed some invisible line that I had not perceived. It threatened mixing the rituals of two religious communities and raised questions about the motives of the retreat. 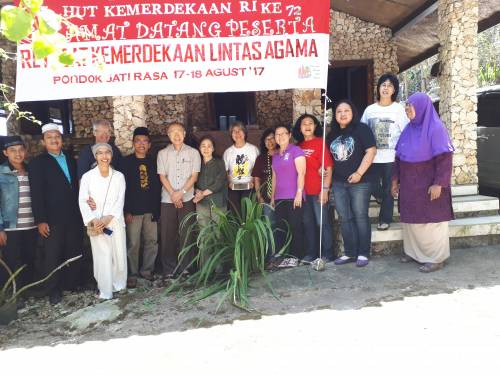 As the time for the retreat drew near, I lost sleep, worrying that no one would come. I opened the invitation to faculty and doctoral students. A few indicated interest, and then some withdrew. I was reminded of the parable of the man who gave a feast to his friends and family and no one came. They all had good excuses. He went into the highways and byways to find guests to attend his party. I appealed to Farsijana: “Honey, we are offering a spiritual feast and no one wants to come! Can you help?” “Calm down,” she said. “I’ll see what we can do through our Griya Jati Rasa (House of Authentic Sense) network.”

The retreat started on Indonesian Independence Day, August 17, 2017, at our remote, traditional house on the cliffs overlooking the South Java Sea. We had room for a maximum of 14 people. Between the House of Authentic Sense (HAS) and ICRS, exactly 14 people showed up, including, six Muslims and eight Christians. The Muslims included four leaders of educational institutions in the HAS network. The Christians were an eclectic mix of leaders. Both Muslims and Christians pledged to share what they learned at the retreat with the people in the institutions they led.

The retreat gave us time for hiking along the cliffs, watching a glorious sunset, meditating alone, sharing with one other person and conversations into the night. Our music was the crash of waves and the chattering of monkeys in the forest. Ohtawa and Shioko asked retreat participants questions that are universal to humankind: What events and people have changed your life? What crises, suffering and trials have directed your journey? What are the turning points that made all the difference? What good things have come your way today? If you hunger for freedom from various things that enslave you, what is the freedom for? What are the deepest desires of your heart? For what do you want to give yourself? These questions are not Christian or Muslim or secular. They are human. Our various answers were not orthodox or morally correct. They were honest.

After the interfaith freedom retreat, Ohtawa, Shioko, Farsijana and I spent another three days sharing with each other our honest feelings, grounded in Christian faith, in response to these questions. We found that the crucial events and people in our lives often turned up at times of crisis, transforming disaster into a turning point. Death becomes resurrection, despair turns into hope. At least that is how faith and love interpret our lives. Ohtawa’s rare appearances in my life were all marks of God’s grace in times of transition.

There is a mystery to the way God works. The visions of our imagination may die. But God can change crucifixion into resurrection, death into life. Please pray for our work to bring reconciliation between Muslims and Christians. Thank you for your support. Our work depends on you. Without you, our witness to the love of God in the largest Muslim country in the world could not continue. Please consider making a donation to support Muslims and Christians working together for peace and justice.