A letter from Bernie and Farsijana Adeney-Risakotta serving in Indonesia

The villagers of Gowok, in Java, Indonesia, held a meeting in their mosque to prepare for Earth Day.  The men prepared a huge tent to protect people from sun or rain, and a stage for a gamelan percussion orchestra, dancers, a shadow puppet show, and a video screen.  The women planned the menu: good, tasty, healthy food, served on banana leaves without plastic.  They planned the Earth Day events with Farsijana, PC(USA) mission co-worker and the founder of Griya Jati Rasa (House of Authentic Sense, HAS), an organization for empowering villagers.  Gowok is a model village for environmental consciousness.  This village created a garbage bank in 2012, where garbage is sorted and recycled.  Poor families make about $120 per year by sorting their garbage and taking it to the garbage bank.  They also sell creative items made from garbage, like bags, purses and wall hangings. 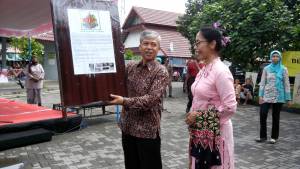 Gowok is an all-Muslim village.  The people believe a true Muslim believer takes care of the earth.  Farsijana empowers Muslim and Christian staff of HAS to creatively raise consciousness about preserving God’s creation.  Muslim villagers learn that Christians also care about the environment and will work with them for common goals.  Together they planned creative performances on Earth Day to raise consciousness about the perilous state of the planet.

What is the mission of the Church in relation to the environment?  Climate change is a growing problem for everyone, but does it have anything to do with faith or mission?  We live in Indonesia, part of the “lungs of the world.”  Indonesia has huge rainforests and the largest number of living species in the world (including land and ocean ecosystems).  See some amazing pictures of this fantastic country at http://kids.mongabay.com/slideshows/indonesian-rainforest-tour/index.html.  Unfortunately, the rainforests are being destroyed at a furious rate.

The Presbyterian Church (U.S.A.) has three main priorities for mission:  (1) proclaiming the Good News of God’s love in Jesus Christ for the world; (2) bringing reconciliation in contexts of violence; (3) overcoming poverty, especially for vulnerable groups like women and children.  Protecting the environment is part of all three of these priorities.  First, part of the Good News is that God loves this world, including the amazing diversity of natural creation in Indonesia.  Isaiah 6 suggests that the earth is God’s home.  God created the earth and lives here.  Romans 8 tells us that creation waits with eager longing and groans with labor pains, waiting to be set free by God’s redemption.  This is gospel truth.  Second, conflict and war destroy the environment.  When war is being waged, no one cares about nature.  Half of the world’s population are either Christians or Muslims.  We need reconciliation between Muslims and Christians so that we can work together to protect our common earth.  Third, environmental destruction kills the poor.  They have no protection against disasters caused by global climate change.  Often it is the poor who lose their land and livelihood to international mining or timber companies.  If we love our neighbors, as Jesus commanded, we must care for the environment that gives them life.

At the celebration in Gowok the men playing in the gamelan orchestra looked stunning in their traditional Javanese sarongs.  The women wore beautiful Javanese batik clothing and embroidered blouses (kebayas) as they served delicious Indonesian food.  All the guests watched the crazy new puppet show and dancers with great enthusiasm.  Traditional art forms were transformed to create a new message about protection of the earth.  Traditional leather puppet shows last all night (eight hours), but this show was just one hour long.  Usually the puppet master is a man, skilled in the mystical arts, but this puppet master is Farsijana’s friend, a simple village woman, Siti Murkanti, who grew up surrounded with the art and lore of puppet theatre.  Usually the puppet show includes just music, voices and shadows on a screen.  But this show featured not only shadow puppets, voice and orchestra but also video images and live dancers who told an old story with a new message.

Farsijana and her colleagues adapted the popular myth of the god Bima, searching for truth in the middle of the ocean, with a new title:  Bima Cleanses the Earth.  The dancers featured children of our neighborhood who study Javanese dance at our home every Friday. Farsijana danced in the role of the controlling goddess, mother of Bima, who tries to prevent him from setting out into the ocean.  In a hilarious scene, she is sent sprawling as Bima resolutely sets out to find the truth.  However, unlike the deep mystical truth that Bima finds in the original story, in this version he finds the mundane truth that the ocean is full of plastic.  Bima sets out to rescue the turtles whose heads are enclosed in black plastic bags.  As dancers clean the plastic from the ocean, a video screen shows crashing waves and scenes from the 17,500 islands of Indonesia. 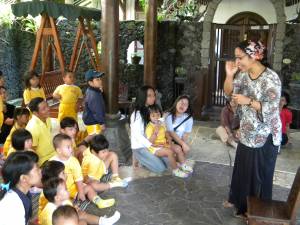 A few days after the staging of the Earth Day celebration in Gowok Farsijana presented a seminar on Theology and the Environment at Duta Wacana Christian University.  To the surprise of her large Christian audience, she used a Muslim organization, Muhammadiyah, as a model of how to build a green economy for the sake of world peace. Muhammadiyah, an organization with over 20 million members, has pressured the Indonesian government to manage the sources of groundwater, rivers and other local water for the prosperity of all the people of Indonesia. They see water as a basic right that must be protected by the state for all its citizens.  Christians can work together with Muslim organizations like this.

Earth Day 2015 is also memorable to Farsijana because she and her colleagues created a huge model globe featuring a torn ozone layer, measuring 10 feet in diameter, with a circumference of 30 feet.  Farsijana presented the globe to a Representative of the Governor as a sign that there is a joint commitment between the government, Muslim communities, Christian communities, and universities to work for the preservation of our common earth.

Farsijana and Bernie are sharing God’s love for the world in Jesus Christ.  We are committed to overcoming hatred and encouraging reconciliation between Muslims and Christians.  And we are reaching out to the poor of Indonesia in the love of Christ.  Our work is made possible because of the generosity of individuals from many different backgrounds and congregations in the Presbyterian Church (U.S.A.).  Thank you, thank you, thank you.  Please consider making a donation to support our long-term work in the name of Christ in Indonesia, the largest Muslim country in the world.