Make A Donation Click Here >
Home › What We Do › Where We Work › Co-workers › Muslims, Our Neighbors

We were horrified by news of the Paris terrorist attacks, which reached us while we were in Hanoi as guests of the Vietnam National University (VNU).  I presented a paper comparing views of religions in Indonesia and Vietnam.  During the U.S.–Vietnam War my father once commented, “Communism cannot be overcome with violence.” Our Vietnamese colleagues at VNU are Communist Party members and war heroes, but also religious believers, and they are thoroughly disillusioned with Communism.  One predicted that the Communist Party in Vietnam will collapse within 10 years the way it collapsed in Eastern Europe.

I wonder if terrorism can be stopped by violence.  The great majority of Muslims are not terrorists, but people from any religion can become terrorists if they lose hope of living in peace, with justice and dignity.  Our mission is to seek reconciliation, justice and peace between Muslims and Christians and help our neighbors, especially women and children, escape from poverty.  Farsijana’s House of Authentic Sense (HAS) is working with Duta Wacana Christian University to bring hope to our Muslim neighbors.

Mother Ngatirah is a brave, hard-working Muslim woman from one of the poorest villages in Indonesia.  Since her family had no income, she started cooking snacks made from bananas and yams to sell in the market.  People loved her snacks, so she organized her neighbors to help find the ingredients and prepare the foods.  She now has 20 Muslim women working with her on food preparation and distribution.  For 12 years she tried to get a government permit to sell food, but without success.  Without the permit she cannot sell outside her immediate neighborhood or get access to funding and wholesale prices for ingredients.  Time and again she was refused the permit because she failed to meet hygienic standards.  She cooks in her own traditional kitchen, with a dirt floor, open fire, thatched roof and open access to her family, neighborhood kids, chickens and other animals. 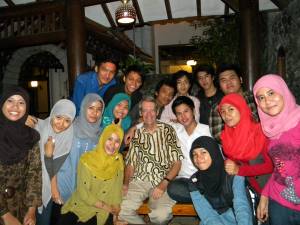 Farsijana visited Ngatirah in her home and promised to help her get the permit.  Ngatirah joined the cooperative run by HAS, which also gives her access to small loans and access to wholesale prices.  She was overjoyed when a team from the architecture program of Duta Wacana Christian University (DWCU) visited her kitchen and drew up plans for a legal, hygienic kitchen so she can prepare safe, healthy, environmentally friendly food and get a business permit.  The Biotechnology Faculty of DWCU dispatched students in ecological waste management to help Ngatirah deal with her garbage.  The dean of the DWCU Business Faculty (who is chairman of the board of HAS) gave a workshop for village entrepreneurs.  They are helping Ngatirah manage her finances so that she can pay back her small business loan from the HAS cooperative and keep track of her expenses.  The DWCU product design program will help Ngatirah and her neighbors package their products to make them more appealing.  Finally, students from the DWCU Information Technology Faculty will help them set up web pages to market their products over the Internet.  The women are not receiving charitable handouts, but rather information, skills and support to be independent.

Farsijana and I are both involved in “upstream solutions,” to prevent hatred and violence from ever occurring rather than just dealing with the anguish after tragedy strikes, like in Paris.  By the grace of God we are trying to bring reconciliation, justice and peace to our Muslim neighbors.  Women and children in one of the poorest villages in Indonesia are gaining hope and learning that Muslims and Christians can love and help each other.  Indonesia has 220 million Muslims, more than the whole Middle East put together.  Yet very few Indonesian Muslims are going to Syria to fight with ISIS.  Ironically, far more Europeans than Indonesians are joining the terrorist ranks of ISIS.  There are many reasons for this, including that many Indonesian Muslims consider Christians their brothers and sisters, not their enemies.  Another reason is that many Muslims in Indonesia have hope for the future.  Violence and death is not an attractive life plan if you have hope.

Even so, “Abdullah,” one of my Muslim graduate students, is very concerned about the growth of hard-line Islamist groups in Indonesia, including at the Muslim university of 8,000 students where he teaches.  He invited me to speak to his student body on “Religion and World Disorder.” He asked me to talk about ISIS and the global domination of “consumerism, rationalism and western popular culture” and articulate a global ethic that transcends Islam and the West.  One probing question from the Muslim students was, “How do you, as a Western intellectual, take responsibility for the West’s part in creating ISIS?” Please pray for us to have wisdom, as we receive many opportunities to address difficult topics like this.

Before we left for Vietnam, almost 80 of my Muslim students from Muhammadiyah University Yogyakarta (UMY) came to our house for a discussion and dinner.  Farsijana and her sisters and friends cooked all day.  The students were so curious about our Pondok Tali Rasa (a home for binding people together in our feelings, thoughts and senses).  Some of the students are from very strict, conservative Muslim families who are worried about the effects of “Western immorality and liberalism.”  In our home they are learning that Western Christians are not their enemies.  We care about many of the same things.  We do not have to agree with each other in order to respect and learn from each other.

The Indonesian Consortium for Religious Studies (ICRS) is nearing its 10th year.  Most of our students and graduates are professors, teaching in Muslim and Christian universities around Indonesia and in many countries.  They are the teachers of the teachers, training religious leaders who are not afraid of people who are different from them.  Fear makes people foolish.  We do not have all the answers in this disordered world, but we know we are called to obey Jesus’s first and greatest commandment: to love our neighbors.

Our work in Southeast Asia is funded by contributions from churches and individuals of the Presbyterian Church (U.S.A.), the PC(USA).  Unfortunately our continued work in Indonesia is under threat because of a significant shortfall in funding.  Ten mission co-workers’ positions have already been terminated and up to 40 more may be recalled in 2016 unless there is a significant increase in giving before the end of the year.  Our positions are among those that are at risk.  If you are already supporting us through prayer and/or donations, thank you.  If you can increase your gift to Presbyterian World Mission for our work, or make a new contribution before the end of the year, we would be so grateful.  If you know of a congregation or individual who might like to support our work for reconciliation, please forward this letter to them and let us know by email.

We will be visiting churches and friends in the U.S.A. during June, July and August 2016.  We would like to visit you and welcome your invitation.  Please contact us at baryogya@gmail.com. We are so thankful for the honor to participate in God’s work in the world.

Wishing you Joy and Peace at Christmas,
Bernie and Farsijana Adeney-Risakotta