Many Indonesians live in an enchanted cosmos, full of spirits and unseen powers. In contrast many Westerners imagine a natural universe that can be understood fully by modern science. Ninety-nine percent of Indonesians are very religious, including more Muslims than the entire Middle East and around 25 million Christians. Many believe that God speaks to them through dreams, sickness and natural disasters as well as through Scriptures and worship. Indonesians also live in the modern world, governed by democratic, capitalist, egalitarian legal structures. Virtually all Indonesians have cell phones and over 60 million are Internet Facebook members. 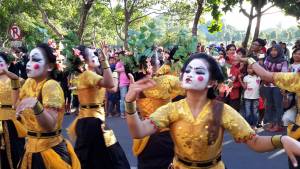 Bali Dancers with a modern touch

In early June Farsijana and I set out to research how Indonesians imagine the relation between the seen and unseen worlds, what is a good society, and how their government should tackle the problems facing Indonesia. The purpose was to find out how Indonesians from different religious and ethnic communities imagine their world through negotiating the tensions between their cultures, religions and modern experiences.  How Indonesians imagine reality determines their practices: how Muslims and Christians relate to each other, how they treat the poor, the relations between women and men, how they deal with violence, whether they care for the environment, their attitude to corruption, and what they think about religion and politics. The purpose of our research was not to tell Indonesians how they ought to think, but rather to learn from them and share with them their struggle to make sense of their own identity in the modern world.  Their journey will have an impact on inter-religious relations throughout the world.

First we went to Bali to learn from Balinese Hindus. Hanna, our niece, took us to a beautiful hidden beach named “A Fragrant Place” (Tegelwangi). While Farsijana was filming, a wave suddenly caught her and threw her onto jagged rocks. She escaped with only minor scratches, but relates that after the “rock kissed her” suddenly she could smell the fragrance of the place. In Indonesian “kiss” and “smell” are the same word.  Later a Balinese Hindu professor explained that all the elements of nature are in our bodies. He suggested that there was a special resonance between Farsi’s body and the rocks that “kissed her” so that she could smell/kiss the beauty. 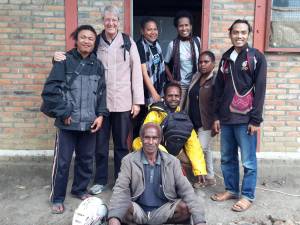 In Flores they say that even the rocks and trees are Catholic. A priest told of rituals that protect his flock from malignant powers. A fellow priest was skeptical of spirits or unseen powers but admitted that he still performs the rituals so as not to offend his congregation. A common ritual wards off the effects of bad dreams. If you dream that you break a tooth, it means someone close to you will die. One student told us that he dreamed he broke a tooth.  The next day he ran into a tree and actually did break a tooth, and then, the same day, his beloved uncle died!

In the mountains of Toraja we attended elaborate funeral rituals where 100 water buffaloes and countless pigs were sacrificed. Torajan pastors explained the funeral rituals as just family reunions and rejected local beliefs that blood sacrifice aids the soul in its journey to the next world. I wonder about the effects of such bloody rituals on the imaginations of the people. Or is the problem with me, who likes to eat meat but doesn’t like to see blood pouring out? Some Indonesians believe that unseen powers require blood sacrifice in order to maintain peace.  Christians also remember a bloody sacrifice in bread and wine.  In Toraja the blood is still real.

We took a bus through spectacular mountains to Makassar. There we “opened the fast” with Muslim colleagues during Ramadan while they enlightened us about the differences between Islamic practices of the Bugis, Makassar and Mandar ethnic groups. In Papua we visited many friends in Jayapura and then flew over snow-peaked mountains to the Baliem valley. “Wah! Wah! Wah!” the tribespeople greeted us, as some of them sported penis gourds while talking on cell phones and longing for freedom. In natural resources Papua is the richest province in Indonesia, including the world’s largest gold mine, owned by an American company.  But the indigenous people are among the poorest in the world. 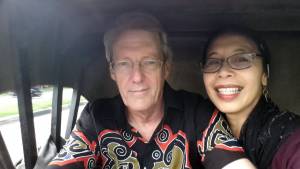 Bernie and Farsi ride in a becak in Aceh

In Minahasa we met intense intellectuals who are struggling to hang on to their culture while grappling with post-modern ideas. Then we flew past an erupting volcano to Halmahera, the spice islands of Farsijana’s doctoral research.  Fifteen years ago we promised to celebrate Idul Fitri there with Uncle Din. Instead civil war broke out and Uncle Din’s Muslim village was burned to the ground. Today Muslims and Christians are much closer than they were before the conflict.  We were finally able to celebrate Idul Fitri with Uncle Din, before he left on the haj to Mecca. In Ternate we interviewed princes who hope to rule over a 900-year-old Sultanate.  One of the princes is a banker who believes his claim to the throne is validated by frequent mystical meetings with his ancestors.

From Ternate we flew to Aceh, the only Indonesian province legally entitled to base local law on Syariah. As we walked down the street holding hands, we suddenly realized that we were almost causing accidents because motorists kept turning to look at us. We asked if it was illegal to hold hands in public. Our friend grinned and said, “No, not if you’re married. But it’s quite unusual.” Farsi explained that she had to hold my hand to keep up with me because of my long legs! In Padang, Batusangkar and Bukittinggi we had great meetings with staunchly Muslim, matrilineal, Minangkabau people. A woman told us that if a husband doesn’t treat his wife right, she can just kick him out of the house because women own all the fixed property.

After two months of travel we returned home to Yogyakarta to try to make sense of all the stories and analyze around 2,000 completed questionnaires.  We are in awe of the mystery of God’s work in so many diverse communities.  Indonesia is creating traditional, religious and modern societies, which are unlike any other place in the world.  God’s work is frequently unexpected and sometimes is seen most clearly through tragedy and suffering.  We are honored to share in the life of God’s people in Indonesia.  They give us hope that there are no barriers to the Spirit and that the Kingdom of God is already among us.  Thank you for your prayers and support.  Please let us know if you would like to learn more about our needs and hopes.