A Letter from Bernie and Farsijana Adeney-Risakotta, serving in Indonesia

Lily’s parents fled from their remote, Moluccan island of Rocky Reef after violence broke out between Muslims and Christians in 1999. Rocky Reef was a tropical paradise. The volcanic earth was rich, the water pure and the sea was full of fish. Lily’s family didn’t have any money, but no one went hungry. As the population grew and resources dwindled, economic and political tensions kept growing on the island. There were no jobs and no opportunities for education, and the young people kept leaving for the city, if they could just scrape together enough money to board one of the infrequent ferries.

Graduate theology students at our home for dinner. 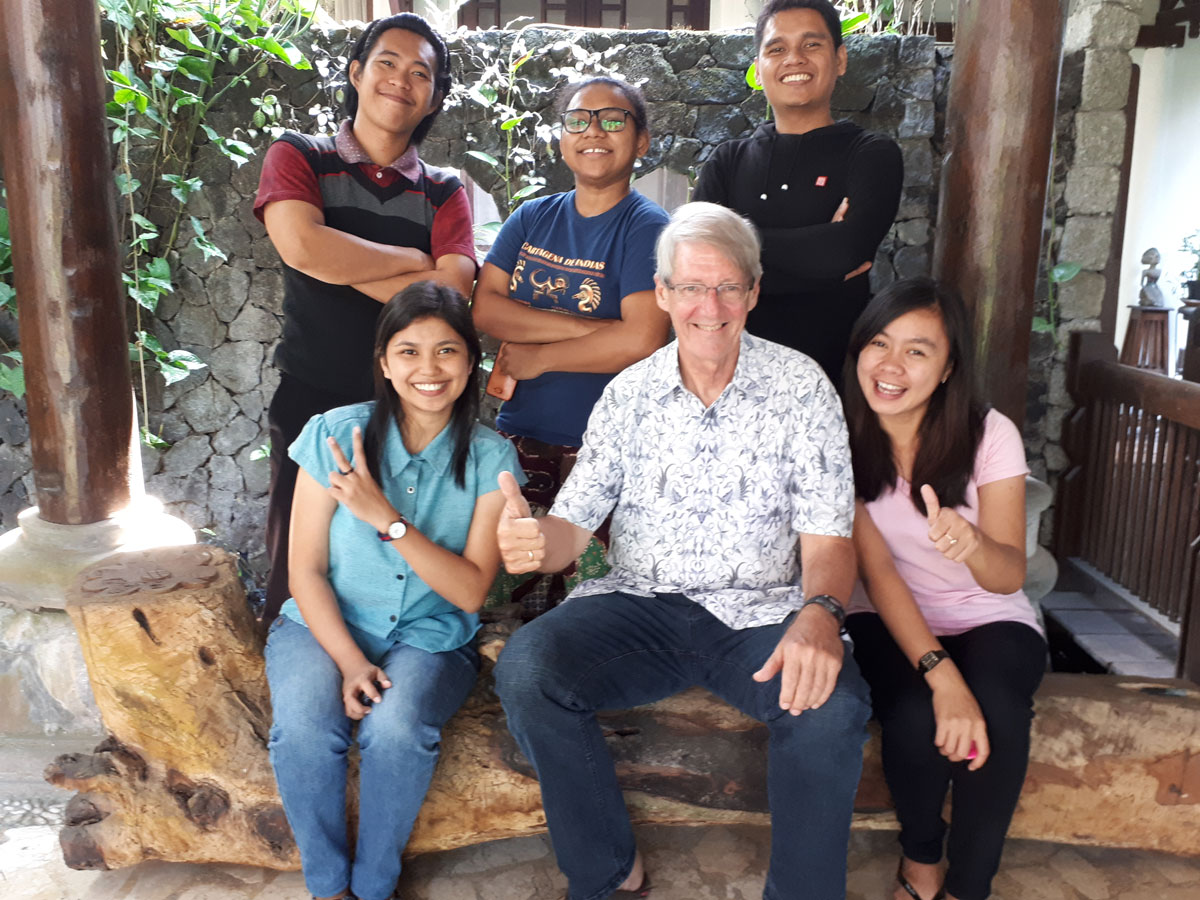 When President Soeharto’s authoritarian government collapsed, long-repressed tensions bubbled over as people from different religious and ethnic groups lashed out at each other. The Christians fled from Rocky Reef. The government put them in a refugee camp and then settled them on a barren island not far from the provincial capital of Ambon. They drowned in grief at the loss of their family members, friends, land, livelihood and beautiful island home. To add insult to injury, their new island was designated as a garbage dump, and all the trash from Ambon city was shipped over to the island. Lily and her community were like discarded people on the garbage dump of history.

Moluccans are famous for their singing, but they felt like the minstrel who wrote:

By the rivers of Babylon — there we sat down
and there we wept, when we remembered Zion. On the willows there we hung up our harps. For there our captors asked us for songs, and our tormentors asked for mirth saying, ‘Sing us one of the songs of Zion!’ How could we sing the Lord’s song in a strange land? (Psalm 137:1)

The new island was infertile, and they had to find a way to feed their children, so they swallowed their pride and took on the dangerous, filthy work of sorting garbage. Lily was a tiny, undernourished child, searching with her family among the smoldering, stinking garbage for anything with economic value that could be sold. Gradually the community learned its new profession and began to prosper. There is money in garbage. As the business thrived, Christians and Muslims from other islands came to join them.

Finally they had resources, and Lily’s parents sent her to Ambon to go to school. She worked hard, graduated and was accepted into a Christian university. Christian faith had sustained Lily and her community through deep tragedy, so Lily and her family decided she should study theology and devote herself to God. She did well in university and applied to the top theology faculty in Indonesia. Lily asked me to supervise her MA thesis on the meaning of work and how a community of garbage collectors read and interpret Jeremiah’s letter to the exiles. I didn’t know her story. I just saw a rather shy, insecure young woman with hints of suffering behind her eyes. Gradually, I learned that she was part of the community she studied.

Lily’s research included leading Bible studies with various groups of garbage sorters. She wanted to discover how their different histories of suffering enriched their understanding of the following passage:

Thus says the Lord of hosts, God of Israel, to all the exiles whom I have sent into exile from Jerusalem to Babylon: Build houses and live in them; plant gardens and eat what they produce. Take wives and have sons and daughters … multiply there, and do not decrease. But seek the welfare of the
city where I have sent you into exile, and pray to the Lord on its behalf, for in its welfare you will find your welfare. (Jeremiah 29:4-7)

From this passage the garbage sorters saw how God can turn tragedy into hope. Instead of farming land, they are now farming garbage so that their children and grandchildren can go to school. The work they do not only provides new economic prosperity, but it is also intrinsically valuable. One of the greatest problems facing Indonesia (and the world) is the problem of garbage. The oceans are awash with plastic. Lily’s community is paid well because it is doing something incredibly important. It is recycling toxic garbage into useful products.

But Lily’s Christian community remains marginalized and vulnerable. It seeks the welfare of its city in a country that is 87% Muslim. The key to its future lies in working together with Muslims for the benefit of everyone. Justice and peace are only possible if Christians and Muslims don’t solidify into communities of mutual suspicion and hate. The Protestant Church of the Moluccas (GPM) recognizes this and recently invited me and a Muslim colleague to speak at a conference in Ambon on social ethics in a multicultural society.

The most common form of “fake news” is the omission of stories that never make the headlines. We are served a constant stream of sensational bad news. You probably read about recent attacks by extremists on churches in Indonesia. It was big news internationally. But you didn’t read about the Muslims who flocked to the churches afterwards to share in the grief and help the communities rebuild. You read about the cowardly suicide bombers who kill and die, but not about the Muslims and Christians who dare to live together, forgive each other and seek their common welfare together. You don’t hear about the lilies growing amidst the garbage.

Farsijana and I are working for justice and peace in Indonesia because we believe that our common future may depend on what happens in the world’s largest Muslim country. Most Muslims want their communities to be blessings to the world, not curses. We are part of their family. Many of you are our partners in this work. We depend on your love, prayers and financial support. If you or your community would like to make a one-time or regular donation to this work, we would be delighted.

We will be in the USA during the latter half of 2018. Please let us know if you would like us to visit and share more about lilies that are growing amidst the garbage.