Cobbie and Dessa periodically visit the US and are able to visit congregations as their schedule allows. Email them to extend an invitation to speak with your congregation or organization.

About Cobbie and Dessa Palm’s ministry

The United Church of Christ in the Philippines (UCCP) was established in 1948 and is a union of several early Protestant churches that were in mission in the Philippines. Cobbie serves the church as a mission facilitator. He leads seminars for local church pastors throughout the Philippines, enhancing their skills in church development and revitalization. He also develops curriculum and trains churches in peace and reconciliation for the Philippine Ecumenical Peace Platform. Dessa coordinates the UCCP’s Theater for Evangelism and Advocacy, which seeks to train church workers and members to creatively communicate the gospel and bear witness to the transformative role of a caring and compassionate church.

More than 7,000 islands comprise the Philippines. However, its population of more than 90 million is concentrated on about 11 of these islands. Forecasters predict that the population of the country could double in three decades due to its high birthrate. The Philippines was a Spanish colony for more than 300 years until the United States took over the country in the early 20th century. It gained self-rule in 1935 and full independence in 1946. Though a democracy, the country has had little political stability. More than 80 percent of the population of the Philippines is Catholic, nearly 3 percent is Protestant, and about 5 percent is Muslim.

About Cobbie and Dessa Palm

Cobbie and Dessa Palm are on a journey of “faith seeking understanding.” This phrase, which famously defined theology for St. Anselm of Canterbury, is expressed by Dessa and Cobbie through their empathy with the people who surround them.

Cobbie, who has served in mission for more than 20 years, says he has been “taught to appreciate the wisdom of the Asian proverb, ‘To hear is to forget, to see is to remember, but to feel is to understand.’” Dessa says, “My mother, a nurse who became a teacher, instilled in us a deep sense of duty rooted in a strong Christian ethic of service, love and compassion.”

For several years in the Philippines Cobbie directed the spiritual formation program at Silliman University’s Divinity School. In 2010 he began a ministry as a mission facilitator for the UCCP. Dessa, who married Cobbie in 2006, came under mission appointment in 2012.

Cobbie facilitates three mission priorities of the United Church of Christ in the Philippines: church development and evangelism, international partnerships, and peace education and advocacy.  In these priority areas Cobbie works to nurture and strengthen churches and communities that are hindered by realities of fatigue, fear, apathy, and conflict caused by the lack of resources and an overwhelming disbelief that change can help their lives and communities.

“I look into the eyes of an impoverished child, and I am told silently by that face of anguish that God demands that I care enough to give my life to building a world in which each child has a future in societies where faith leads to the transformation of communities from death to life,” Cobbie says.

Dessa traces her calling to mission to age 13, when she was a “sickly asthmatic girl who went to a theater workshop.” She says the experience turned her life around. “The adage that ‘the creative allows you to touch the Divine’ became real and compelling for me,” she says. “I was born anew.”

After she married Cobbie, Dessa began to sense a natural kinship to Cobbie’s work. She is grateful for the opportunity to pursue her calling through Christian theater. “I feel deeply connected to what God has tasked me to do, especially in using my gifts to educate, to heal through the arts, to minister to children, youth and women,” she says. “Doing this makes my heart feel so alive.”

Both Cobbie and Dessa were born in the Philippines. Cobbie’s parents were longtime Presbyterian missionaries James and Louise Palm, and Dessa is of Filipino descent. Dessa earned a bachelor’s degree from the University of the Philippines and advanced degrees from Silliman University and the New School for Social Research in New York City. In addition to her background in the dramatic arts she has also worked in nonprofit management.

Cobbie earned a bachelor’s degree from Eckerd College in St. Petersburg, Fla., and the Master of Divinity degree from Union Theological Seminary in New York City. He worked on the staff of the World Council of Churches before entering mission service.

“I have been deeply blessed by the opportunities the PC(USA) has offered me to serve the Lord,” Cobbie says, “in all that I do, and into each new ministry where God leads me, my presence brings to that place the presence of the PC(USA).”

Watch a video of Cobbie and Dessa Palm 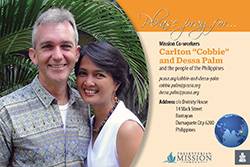 Use this card as you pray for mission co-workers Cobbie and Dessa Palm. This card includes a photo and overview of their work. Working alongside…

Give in honor of the ministry of Cobbie and Dessa Palm