A letter from Dessa Palm serving in the Philippines

Individuals:  Give online to E200393 for Cobbie and Dessa Palm’s sending and support

When I relocated to Dumaguete City more than a decade ago, one of the things I noticed quickly was that young people often identified each other according to the school they attended. It is a university town, after all, which has created a vibrant youth-oriented cultural tapestry and nurtured a young population. But it was easy to sense that these school identities also created walls between the youth, as school identity often had corresponding stereotypical notions related to class, religion and culture.

In 2005 a group of about 30 young people from various high schools and colleges, mostly public and a few private, gathered to participate in a workshop aimed to create a performance about the plight of children who have been trafficked for sexual purposes. In a span of three days stories were shared, hearts and minds were opened, walls were torn down, and friendships were forged in a creative and discursive process. School identity was recognized, but its weight in their defining themselves vis-à-vis others became less important. Ecstatic with the experience of doing theater for advocacy, the group subsequently formed the Youth Advocates Through Theater Arts or YATTA, a youth-based theater organization that continues to bring stories to the public arena as well as use theater to creatively train our communities.

How good and pleasant it is when God’s people live together in unity!  Psalm 133:1

In planning for its 10th year production last December, YATTA’s artistic team of Junsly, Hope and Nikki, mostly young adults now who once attended Negros Oriental State University and Silliman University and who had been transformed by their engagement in community theater, agreed to create a performance that captures the creative spirit that allows people to connect and embrace their diversity with respect. It was also felt that the performance had to be a story that breathes and pulsates with the realities of our town, Dumaguete. This brought our attention to a young girl named Charmaine, who frequents the streets near a famous meeting place that sells chicharon and mani (pork rind and peanuts). We envisaged how her character’s radiant personality weaves through the lives of various young people who have their own stories to tell and struggles that they live out.

The play in its final form became a tapestry of young people’s dreams, their search for meaning in life, their struggles and triumphs. It brings fragments of reality and senses that are distinctly Dumaguete—its settings, the characters peopling the streets, its brand of music.  And then it is about a girl, compelled to help her family augment their income, unwittingly threading through these seeming disparate lives, connecting her love for singing to the community’s sense of purpose.  Amidst their individual brokenness they find their voice, they build their strength, they emerge resilient. 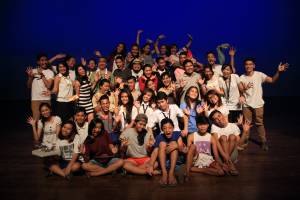 The production also led us to the Belltower Project, a dynamic network of Dumaguete songwriters and musicians that has independently produced its collection of original songs over the past three years.  To see the songs given new meaning in the context of a character or the story gave their own composers a wonderful treat.  One of them was spellbound when his whimsical song about a little pig under their house was transformed into a little girl’s eulogy for her beloved pet pig in a four-part choral arrangement.

Engaging performers from eight different schools in Dumaguete brought another dimension of community building. To see friendships forged in the process of hard work and creative synergy is poignant and reminiscent of the spirit by which YATTA was formed in 2005. In one of the last scenes the youth characters rally around to support the little girl’s dreams. One of them suggests that they pray, but another one quickly retorts, “But I am from another religion.” Another suggests, “Then let’s just pray in our own unique ways.” They sing: “We will stand strong with the strength to go  on….As the savior gives us the strength to carry on, The rock that I could lean on, To our God, our Creator, be the glory forever and ever amen….”

Dismantling walls has always been an important aspect of Christ’s work as he constantly sought ways to remove discrimination and worked on the reconciliation of God’s children. Ephesians 4:3 reminds us to “Make every effort to keep the unity of the Spirit through the bond of peace.”

This spirit of connecting and weaving continues to manifest itself even in the ways that YATTA’s work with an expanding circle of young people are deeply and spiritually linked to churches in the U.S. through Presbyterian World Mission, whether in prayer or in the support of our various ministries. For this we regard our 10 years of creative service as a trans-border and collective triumph reflecting God’s all-encompassing and generous love in the world.