Make A Donation Click Here >
Home › What We Do › Where We Work › Co-workers › Walking by Faith, Not by Sight

Peacemaking: Walking by Faith, Not by Sight
—2 Corinthians 5:7

Walking the road of peacemaking as a member of the Philippine Ecumenical Peace Platform has been tenuous and fragile at best, but I have never witnessed anything like this!

The Philippine Ecumenical Peace Platform (PEPP) was organized in 2007 through the support of the Royal Norwegian Government, which is the third-party facilitator of the Peace Talks between the Government of the Republic of the Philippines (GRP) and the National Democratic Front of the Philippines (NDFP), which is waging a 46-year revolution to dismantle the remaining vestiges of the colonial imprints in the political and economic sphere of the country that continues to hold back equitable development and is keeping the majority of Filipinos poor and impoverished.

The wisdom and affirmation of this unique cooperation of different churches is that both parties in these Peace Talks understand that the Talks will not move forward without support from the Filipino people, and they recognize that the churches are in a unique position, in this religious country, to generate and mobilize that support. The churches have the voice and the reach through her many institutions to build a peace constituency that is needed in keeping the Peace Talks on track. 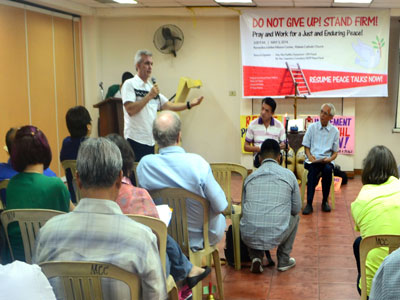 Since 2007 I have travelled throughout the Philippines with Catholics, Evangelicals, Bishops, Pastors and the lay to facilitate Peace Workshops with a focus on these Peace Talks. The majority of these travels have been during an impasse, when the talks have broken down and stalled due to the hardening of positions on both sides. During these times it is not clear and visible if there is hope for the talks to ever succeed. The challenge is immense for any facilitator to try to create excitement and hope about something that is looking so empty and hopeless. In these moments, we walk by faith and not by sight.

But a new day is dawning, and on August 26, 2016, under the new administration of President Rodrigo Roa Duterte, the long walk by faith has broken the emptiness and impasse with a new peace agreement forged by both parties. In Oslo, Norway, where these formal talks are being conducted, both parties have agreed to create the appropriate atmosphere of sincerity and commitment by both releasing their respective imprisoned captives—the Government holds some 504 political detainees in different cells around the country. Both parties have agreed to extending their respective ceasefires and look forward to reconciling them into a permanent and indefinite truce at the next round of talks in October. Finally, both parties have committed to returning to the table to reach a final agreement on the Comprehensive Agreement of Social Economic Reform (CASER), considered to be the heart and soul of the peace process. This agenda involves the most contentious issues, such as national industrialization, genuine land reform, mining, banking and labor laws, and foreign policy. 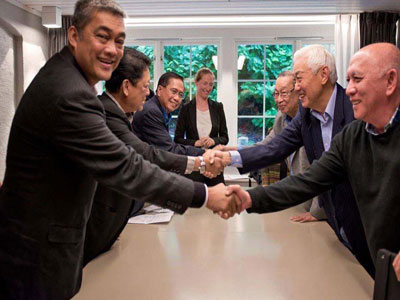 The formal Peace Talks ended on a high note for the Philippines with the hopeful prospect that these agreements will be the beginning of change and further redefinition of the social and political conditions in the Philippines. In the same way it ended on a high note for us in the churches who have walked by faith in building up people’s participation even in the most difficult of times. The Chief Negotiator for the NDFP, Luis Jalandoni, in his closing statements said, “People’s participation is essential to the success of the talks.” This tells me our efforts are being felt and the God of the Bible who is holding us together is not resting. The next round of talks will be in October and our church efforts to build up the constituent support for the talks continue, and God has given us a new hopeful vision with which to rest our faith.

With you in Christ,