It was still dark when we were instructed to exit the barge that had docked on the western coast of Southern Leyte; it was a short night and I was scheduled to make two presentations to the Christian Young Adult Fellowship (CYAF) at their Annual Convention this day. The CYAF is the organization of young adult members of the United Church of Christ in the Philippines. On to the dark pier I staggered, feeling the need for more sleep and hoping that I would be found because at 4:00 am, in the dark of dawn, there is no place to find a cup of coffee or even a bench to sit on in this still sleeping town of Hilongos. 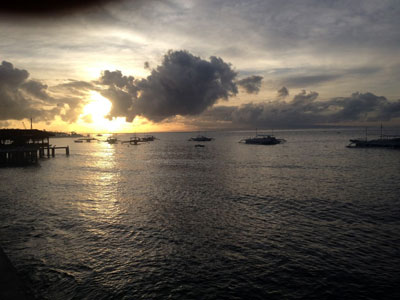 Dawn at the pier of Hilongos, Leyte
Picture by Cobbie Palm

Walking with the crowd of exiting passengers on the dark pier, I slowed the pace of my walk, and a man and woman started to make their way toward me. I was hoping it was not just another vendor offering a ride to the town center on the sidecar of their bicycle, because I was instructed to wait on the pier and, not knowing who was to pick me up, these vendors can be convincing that they know about me and where I am to go, appearing to be the pick-up sent to meet me.

The woman approaching said, “Pastor Cobbie?” I was relieved to hear my name and answered “Yes,” immediately expressing my gratitude for her waking up at such an early hour to meet me. She smiled and said, “I am Grace.” My heart was humbled as I recognized “Grace” as the signatory of the invitation letters as the President of the CYAF. Here she was on one of the most important days of her life as President of CYAF, waking before dawn to meet me at the boat.

I watched her as we came to the church, decorated and filling with people for the Annual Convention. Grace was a perfect picture of a gifted multitasker—she flowed with an ability to keep me at her side with introductions to person after person while answering their many concerns and questions. She impressed me with the ease and comfort she radiated to even the most alarming problems being brought to her about the event that was about to start. At one point she was told that the liturgist had called at the last minute and expressed her regrets that she could not come, Grace had already in mind the perfect alternative, and as I was to see later, it was the perfect alternative.

The day went by with ease, the crowd swelled to 142, and the time and energy we had all put into the preparations reminded us of the wisdom in Proverbs 20:4, those too lazy to plow in the right season will have no food at the harvest. I felt the relief of having done my part and was now just enjoying the company of the participants when I looked at the schedule and realized that assembly time for the next morning was 4:30 am for morning devotions.

It was another short night when the 4:00 am knock on my door sounded. I staggered around to put myself together for the morning devotions and walked outside to the garden where people were starting to gather in the still dark dawn. The voice of Grace led us in the singing of This is the Day that the Lord Has Made and on into a series of familiar hymns and praise songs. Then came the unexpected instruction to share your favorite memory Bible verses around the circle of those gathered.

Reciting memory verses is a tradition commonly experienced in the more rural regions of the country, but it is a tradition less familiar to my urban teaching life at Silliman University. The sharing began with the person next to her and went one after the other around the circle toward me. As memory verses were being shared, my heart beat began racing in fear as I listened to one memory verse after another and wondering if I would have any left in my memory bank to share. Being the invited guest speaker and faculty from the Seminary, I could not possibly pull a blank and say “pass” when it came to me—that would be a shameful nightmare.

Three persons before my turn, and the fourth memory verse I had in my head was called out and shared. It was a terrifying moment and I was starting to panic and prepare for the shame of calling out “pass,” when my empty memory bank received John 10:10, “The thief comes to steal and to kill, but I come that all may have fullness.” I had survived in some mysterious way and was so relieved, feeling I could start the day with a semblance of dignity, when the circle ended back with Grace.

It was not over yet as Grace apologized to the gathered crowd, informing us that the person assigned to give the morning reflection was unable to come, but God had provided. She went on to say, “God has provided us this morning with a seminary-trained teacher and lecturer, Pastor Cobbie, who will give a reflection on his memory verse.” I wanted to wake up from this bad dream. I wanted to say, no, I am not the one God has provided for this. My heart was again racing and my mind was entering into confusion, trying to piece together an instant reflection that would resemble coherence and somehow meet the standard of her introduction.

Nothing was coming, and I walked out empty into the center of the circle and looked down, and there on the grassy ground was one small sandy patch. With my finger I slowly drew a line in the sand and began by saying, “Jesus drew a line in the sand as he met with a broken desperate life; we do not know exactly what he said, but I believe he was drawing a dividing line helping her to see the world of the thieves on one side and the world with God on the other, and that we all must make a choice as to where we will stand on this day.” Words continued out of my mouth that came to me out of my emptiness, and when I had ended, there was an applause of appreciation.

It was a Grace moment at dawn, like the verse that found its way into my empty memory bank. I know it was God’s Grace in the early dawn of that day that filled me and took me from confusion to peace.